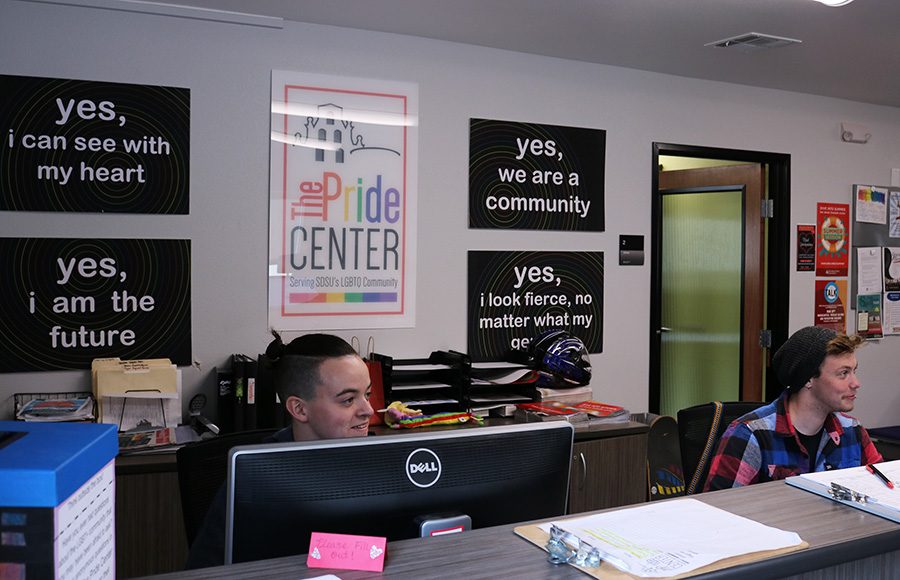 The Pride Center is partnering with Counseling and Psychological Services to offer a discussion group and a safe space for members of the LGBTQIA community.

Todd Carson, a counselor for Counseling and Psychological Services, organizes the sessions.

Carson said he facilitates discussions around a number of different topics that are important for students.

“I provide some camaraderie, provide the opportunity to discuss these things in a group, in a confidential setting, and provide some support for the students,” Carson said.

The discussion group, called “Queerversations,” is held bi-weekly on Wednesdays. Each session has a different topic for discussion, including the political environment for LGBTQIA students, gender fluidity and digital dating.

Lujan said the decision was made to “re-tool” the discussion group after only a couple of students were attending during the fall semester.

Lujan said the center re-worked the structure of the group to make it more appealing for students.

“We put specific topics to each group, so that way students can see the topic, connect with it and possibly come in,” he said. “And they get their kind of choice now when they want to engage in those conversations.”

Lujan said while anyone is welcome in the discussion group, it is supposed to be a safe space for members of the LGBTQIA community.

“All our groups are for all students, but there’s certain places where we’d like to keep it to LGBT students just so that they have a space to feel free to voice their opinions without any judgment,” Lujan said.

Lujan said the Pride Center has various outlets for allies to connect with.

“But anybody’s able to come, because we don’t know if someone’s not out and maybe not identifying yet,” he said.

Lujan also said while the focus of the group is on topics pertinent to LGBTQIA students, it also aims to create a community.

“The group is not only just to kind of delve into these, like, deep conversation pieces or discussions,” he said. “It’s also another way to build community and meet other queer people on campus.”

Carson said while there has only been one discussion group so far this semester, the group in its previous form was universally appreciated by its participants.

Carson said students appreciate having a dedicated time and space to talk about things that are on their mind and on their hearts, and to hear other people’s views.

“To know that some of these experiences and concerns are very common, and to get some peer
support and feedback on that,” he said.

Interdisciplinary studies junior Shane James said the discussion group made him more aware of the different experiences of his fellow students in the LGBTQIA community.

“It’s really interesting to see the different perspectives and to know that there’s still that underlying thing that ties us all together,” James said.

The next event in the “Queerversations” series titled “A Post Orlando World: Being Safe, Feeling Safe” is at 3:30 p.m. on Feb 15. in The Pride Center.