A fun reflection on coming of age 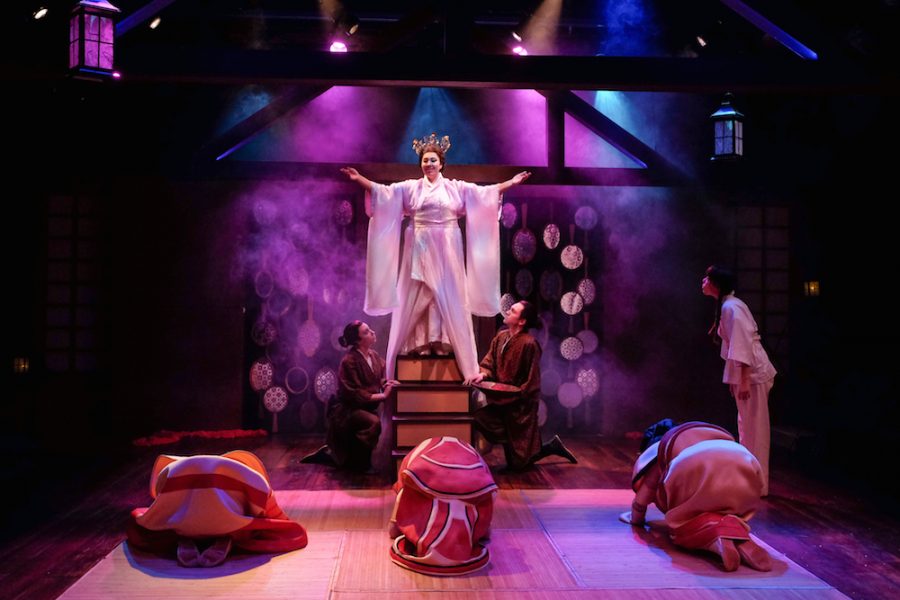 For more than five days, the Experimental Theater at San Diego State ventured back to the Edo age of ancient Japan in a whimsical stage-telling of the folktale The Matsuyama Mirror.

Flaunting a convincing cast hand-in-hand with a cleverly modernized script by acclaimed playwright Velina Hasu Houston, this retelling tackles the concepts of human hardships, change and above all growing up with imaginative grace.

Framed around a family living in Japan during an era of rigid social order and strict gender roles, Aiko and her older sister Tooriko find themselves handling the natural transition into womanhood in very different ways.

From sewing lessons with their mother to discussing the dreaded process they call, “the stomach war,” Aiko is stubborn to accept these forthcoming responsibilities at every turn.

All she ever wants to do is play.

Upon the tragic death of her mother, Aiko seeks refuge from reality in a gift bestowed to her by her father, a mirror.

What follows is a bizarrely pleasant journey into a realm of fantasy.

Kokeshi dolls hobble up and down the theater aisles hilariously squawking about how it is, “time to play.”

A supernatural being who goes by the name of the Grand Mistress of Matsuyama makes an extravagant appearance.

By the wacky voyages conclusion, Aiko has grown, matured into a young woman of deeper understanding.

An understanding not only about life’s changes, but also why such changes occur.

With a stage sparse of glamorous props and needless décor, the play leans heavily on the stage-presence of its actors, a strategy which proves to be successful for Director Peter Cirino and his cast.

Steering the audience through the majority of the scenes is Stephanie Kwik’s exuberant portrayal as Aiko.

Picture a fun mixture of Boo from Monsters Inc. armed with a Peter Pan mentality of never growing up.

With each animated smile and head-drooped scowl comes a realistic complexion of childhood wonderment.

“Stephanie has this quality of being able to be grown up and at the same time be childlike,” Cirino said. “And that’s one of the things with Aiko, she’s a tweener. She’s getting to that point where she’s coming of age.”

Christina LaMar staples her personality onto the stage just as well, playing the fiercely stern Tooriko.

Her cold mannerisms and stiff posture clash wondrously with Aiko’s carefree attitude, making for a catalogue of amusing back-and-forth engagements between the likable pair.

But what pierces even further is their sense of connectivity.

No matter what kind of hair-tugging battle or name-calling brawl they get into, their chemistry gives this silent assurance to the viewer that they truly do care for one another.

“We were friends before the show but working on Matsuyama has definitely brought us closer.” Kwik said. “We actually auditioned together and I remember how easy it was to just be her sister. No pretending necessary.”

This flooding level of affection is equally matched in Summer Cuyjet’s portrayal as the tender Okaasan.

Whether she is speaking wise words atop a cloudy podium within the mirror-world as the Grand Mistress, or teaching her daughters of womanly obligations as the mother, Cuyjet instills a convincing sense of maternal warmth in her performance.

This makes her abrupt passing all the more emotionally gut-wrenching, especially bringing the audience to tears when Aiko describes her mother through whimpers as, “A soldier of the soul.” Topped off with show-stealing energy by Paul Scott, Brian Ting and Matt Tornero as the humanized Kokeshi play dolls, this re-imagined folklore explodes with life at the hands of its cast.

The final showing of The Matsuyama Mirror is Feb. 26, which means the upcoming weekend is the final opportunity to join Aiko on this charming adventure.