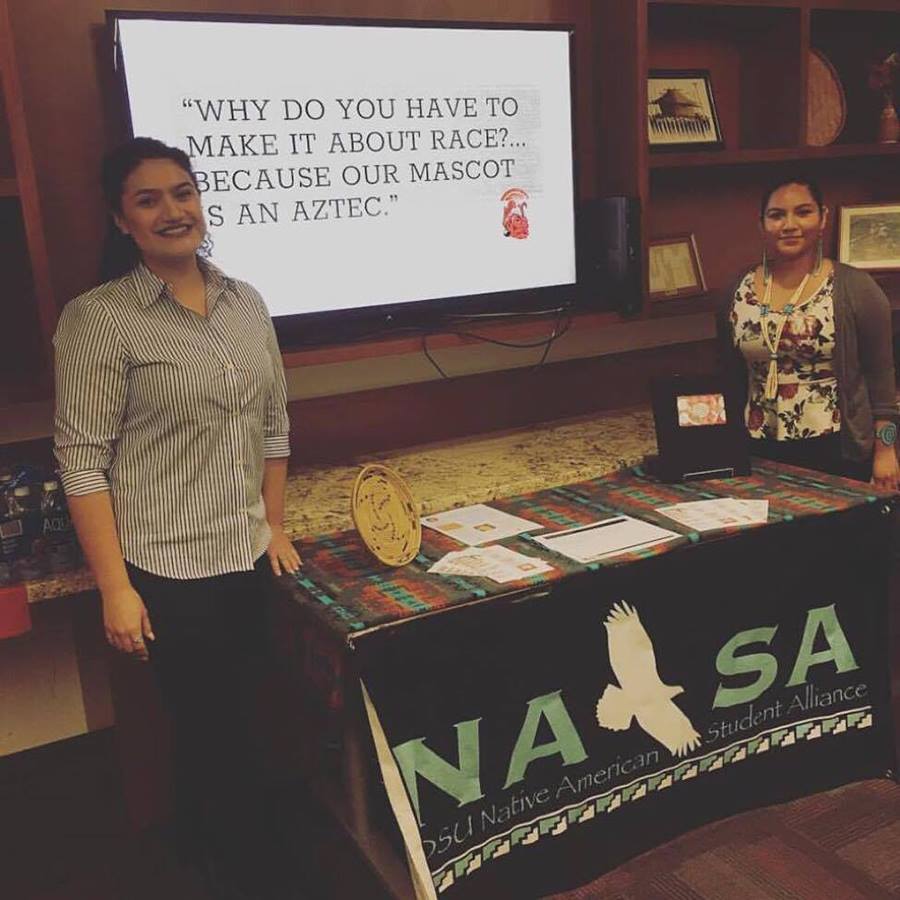 The Native American Student Alliance hosted an event on Feb. 15 to discuss the use of the Aztec as San Diego State’s mascot.

The event was part of the Spring into Diversity series hosted by Associated Students’ Student Diversity Commission and SDSU’s cultural organizations.

The event, titled “Why do you have to make it about race? Because our mascot is an Aztec,” was organized by the student organization. The event drew an audience of around 40 faculty members and students, and was led in a question and answer format.

The presentation and discussion was led by NASA president Marissa Mendoza and NASA secretary Raelynn Bichitty. Mendoza and Bichitty discussed the history of Native Americans in San Diego and the effects the Aztec mascot has on Native American students.

Mendoza said the mission period of California, when San Diego was first colonized by the Spanish, was a time of mass enslavement and genocide of the California Indian population. The missions themselves, which today are popular tourist-spots, were built by Indians by force, Mendoza said.

Articles published by PBS and the Los Angeles Times support the history presented by Mendoza.

“Spanish soldiers kidnapped Indians by the thousands. They also were forced to care for livestock, tanned hides, and produced candles, bricks, tiles, shoes, saddles, soap and other necessities. If they misbehaved, they were whipped, branded, mutilated or even executed,” a PBS article from 2006 reads.

“Diseases, dislocation and starvation caused many of these deaths, but the near-annihilation of the California Indians was not the unavoidable result of two civilizations coming into contact for the first time. It was genocide, sanctioned and facilitated by California officials,” the article says.

The first mission built in California was Mission Basilica San Diego de Alcalá, built in San Diego in 1769, according to the mission’s website.

The mission is a couple miles from SDSU, on the other side of the I-8 freeway in Mission Valley.

The mission is currently an active parish of the Roman Catholic Diocese of San Diego.

Mission Basilica San Diego de Alcalá’s website does not say that California Indians were forced to work, or that a genocide was committed, but that some of the Indians protested against the conditions implemented by the Spanish missionaries.

“Unfortunately, two of the mission or Diegueno Indians became dissatisfied with the regulations and conditions established by the Spanish authorities, and they incited hundreds of Indians in remote villages to riot,” it reads.

Mendoza said the Mission’s history is glorified by the architecture at SDSU.

Hepner Hall, the oldest building on the university’s campus and symbol of the school, is architecturally similar to the mission where Indians were enslaved.

Mendoza said this glorification of a painful history is offensive to Native Americans.

Bichitty said that in consideration of history, SDSU should not have a Native American mascot, which is a similar form of mockery to blackface, widely considered to be offensive to African Americans.

The National Collegiate Athletic Association implemented a policy in 2005 which prohibits participating teams “from displaying hostile and abusive racial, ethnic and national origin mascots, nicknames or imagery at any of the 88 NCAA championships.”

SDSU’s mascot was not covered by this policy after the NCAA found that the Aztecs were not a Native American culture, according to an article published in August 2005 by the San Diego Union-Tribune.

This finding was attributed to then-SDSU President Steven Weber, who said that SDSU did not find “any organized tribe or group related to Aztecs.”

Weber explained his findings in a letter written on April 27, 2005, to the NCAA’s vice president for education services, Ron Stratten.

“As I mentioned in my letter on January 3, 2003, the Aztecs are not a Native American or American Indian culture,” Weber wrote. “However, the Aztecs are central to the cultural heritage of Mexico.”

The Aztecs ruled a large empire in 15th and 16th century Mexico. The Aztecs were conquered by the Spanish conquistador, Hernán Cortés, in 1521, according to the Encyclopedia Britannica website.

Mendoza said SDSU is not on Aztec land, but on Kumeyaay land. The Kumeyaay tribe has been on San Diego land for at least 12,000 years, according to the tribe’s website.

Following the event, the alliance posted an official statement about the university mascot on their Facebook page. The statement said the mascot “embodies the existence of institutionalized racism.”

It also references a 2009 party hosted by the fraternity Sigma Alpha Epsilon, with the theme “Cowboys and Nava-hoes.”

Bichitty, who identifies as Navajo, said that this party perpetuated the over-sexualization of Native American women in popular culture, which she said served to dehumanize Navajo Indians.

According to the Rape, Abuse & Incest National Network, Native Americans are twice as likely to be sexually assaulted compared to other races.

“We are individuals,” Bichitty said during the presentation.

Mendoza said that President Elliot Hirshman was invited, but he did not attend the event.

The Alliance presented their official statement to the Committee on Diversity, Equity and Outreach on Thursday, Feb. 23, and announced plans to email the statement to President Hirshman, Vice President of Student Affairs Eric Rivera, and Provost Chukuka S. Enwemeka.