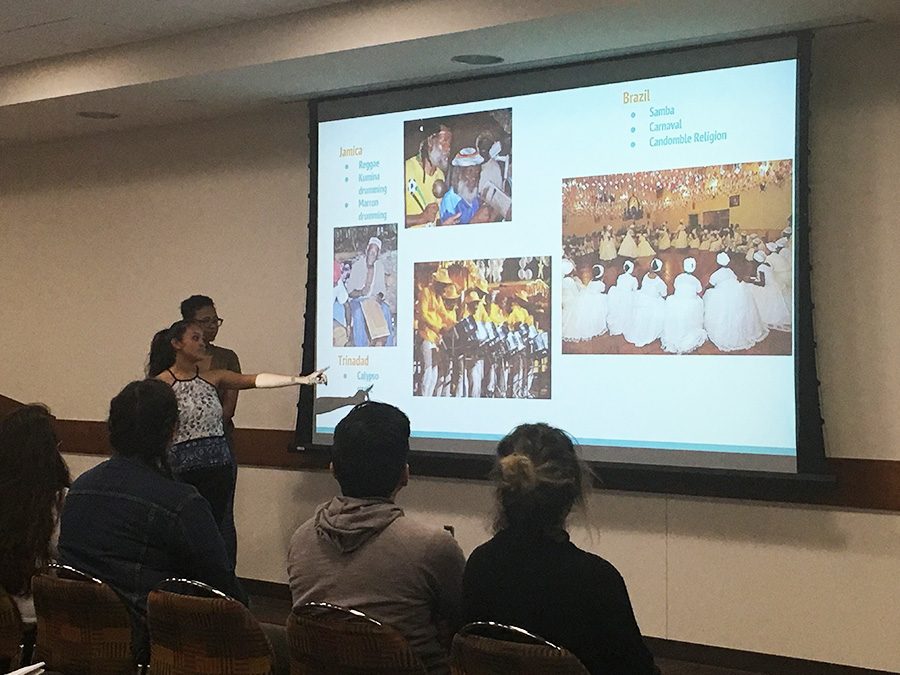 The San Diego State Afrikan Student Union partnered up with SDSU Movimiento Estudiantil Chicano de Aztlán to discuss the meaning behind being Afro-Latinx on Feb. 21.

The talk was presented to faculty and students as part of two-week “Spring into Diversity” lecture series.

The presentation was given by social work sophomore and MEChA member Marlene Martinez and psychology junior and ASU member Rajane Devlugt. It took place in the Templo Mayor room of the Conrady Prebys Aztec Student Union.

Devlugt said the event was an attempt to spread diversity.

The presentation started off with an icebreaker that required the audience members to each find another person and share three things they identify with.

Each person then found someone else to identify themselves with corresponding to the three things they chose.

“In America, we are judged by how we look like,” Devlugt said. “This activity allows you to have a conversation with the next person and actually get to know them by conversing and getting past stereotypes.”

Devlugt said the “x” in “Latinx” is a gender neutral version of “Latino.”

“The ‘x’ allows everyone to be inclusive and not force anyone to conform to masculine norms,” she said.

Afro-Latinx refers to Latin Americans with African descent. They were not considered a minority in Mexico until 2015.

“The darker skin people are portrayed as servants or maids,” she said.

In a video Mario and Devlugt presented, an Afro-Latinx woman explains how she used to want her skin to be lighter, but has recently learned to appreciate her skin color.

“In a lot of these Latinx communities, there’s a lot of anti-blackness and racism that goes on. The darker your skin, the more oppressions you go through,” Martinez said.

Martinez and Devlugt provided a list of artists, poets and activists who consider themselves Afro-Latinx such as Bachata artist Romeo Santos, who is Afro-Puerto Rican and R&B artist Mariah Carey, who is Afro-Venezuelan.

After the presentation, Martinez and Devlugt began a conversation with the audience to talk about the races they identify themselves with and the different cultures they embrace.

Center for Intercultural Relations Diversity Peer Educator Brie Hornig said she finds events like these interesting because it is an opportunity to learn about other cultures and identities.

“The main thing to take away from this is to not judge someone based on how they look like because you don’t know how someone identifies,” Hornig said.

Devlugt said she was motivated to lead the event because of the importance of spreading diversity.

She said it is important to acknowledge one’s race and background in order to not neglect a part of who someone is.

“All of these things make us who we are as one identity, as an individual,” Devlugt said.

Martinez and Devlugt said they want to and plan to have more events that collaborate MEChA and ASU in the future.

“I think the most important part of this is to educate people about the different identities and races people associate themselves with,” Devlugt said. “It’s about spreading diversity. Period.”