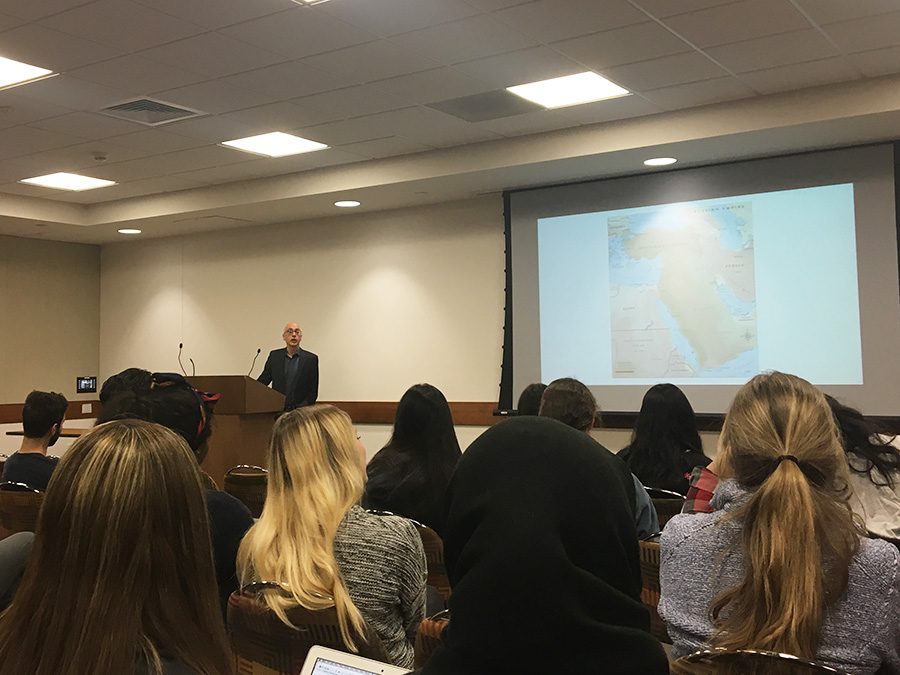 The Students for Justice in Palestine at San Diego State kicked off their month-long series of events in honor of Palestine Solidarity Month on March 1.

The series began with a lecture conducted by Professor Dr. Farid Abdel Nour, who teaches Political Science at SDSU.

The lecture focused on the history of  Palestine, and how the Arab Israeli conflict began.

Nour spoke to a room filled with students looking to learn about Palestine.

Undeclared freshman Maya Alzaben is of Palestinian descent and a member of SJP. She said she enjoyed the lecture and came because she wanted to learn more about where she was from.

Alzaben said it’s important for people to be aware of other cultures.

“To have a deeper global awareness you have to know how other people around the world are being treated,” she said.

Alzaben said she is looking forward to the reconstruction of the Israeli West Bank wall that represents apartheid to Palestinians. The representational wall will be up March 20-23,

The next event in the series will take place on March 7 and will discuss similarities between the West Bank Wall and how it relates to the future wall that will separate The US from Mexico.

On March 15 Ozzie Monge will share his experiences of coming from America to settle in Israel.

A lecture on understanding the BDS movement will take place on March 20.

The lecture series will conclude on March 22 with an examination of Israeli Settlements from first hand experience with Gary Fields.

Political science junior said he is most looking forward to the event on March 20 discussing the BDS movement.

Alemi highlighted the fact there would be so many different perspectives and all of the speakers have had direct involvement in the movement.

“A ll four of these speakers have very different education and their different perspectives and involvements within the movement will make it an interesting lecture,” Alemi said. “SDSU has had direct involvement with the movement when there was a vote for the university to disinvest from organizations that support the Israeli occupation. This generated awareness of the movement which brings us to where we are now.”

Alemi said the series is especially important because of the current political climate.

“Palestine and Israel are in the news more often with Trump being president, and because of this it’s important to be aware of it and what is going on there,” Alemi said. “Billions of our tax dollars go to Israel, and they are a big ally of the US, so there is a natural interest for SDSU students to know what’s going on.”