SDSU in running for ‘recycling champion’ 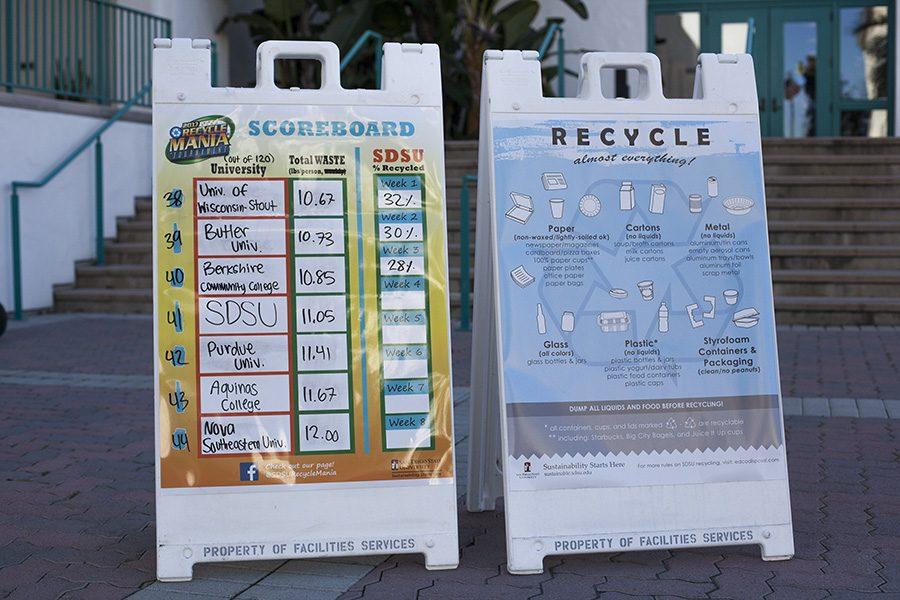 San Diego State is participating in the eight-week annual recycling competition, RecyleMania, for a chance to become the ‘recycling champion’ among colleges and universities across the U.S. and Canada.

RecycleMania is from Feb. 5 to April 1 but the winner announcement is April 17.

Assistant Director of Sustainability Tom Abram said campus sustainability is trying to encourage students and faculty to get involved by placing posters and scoreboards about recycling and RecycleMania across campus.

SDSU reports the amount of recycling and waste from the campus and dorms every week during the competition.

SDSU was ranked 15 against 77  participating universities.

“We have seen a lot of improvement and we have room for improvement,” Abram said.

The amount of recycling has increased since the competition started, according to the RecycleMania recycling and trash report.

“I try to recycle on campus and I will hold on to a bottle until I find the appropriate trash bin,” political science junior Luis Cordero said.

Students are able to see the report and SDSU’s ranking throughout the competition by going on the RecycleMania website.

“The goal of recycling is to reduce the amount of waste that we as both individuals and a university are sending to the landfill,” campus sustainability business management senior and intern Taylor Flores said.

Campus sustainability has been tracking the amounts of the waste and recycling in order to find methods to become a more sustainable campus.

Abram said changes have been made in different buildings to increase the amount of recycling, such as adding more recycling bins and posters.

“A lot of people just don’t know where they put their Starbucks cup,” Abram said. “So it is a very small number of what they recycle and at the end of the day it takes just as much time putting something in recycling as the trash.”

The competition is getting more people to participate and help with recycling more than before to make it a habit for everyone to continue.

“We need to work on shifting culture around campus on changing sustainability and we try to get them engaged,” Abram said.

Students are able to follow the RecycleMania competition through SDSU’s RecycleMania page and participate in activities and clubs around campus.

Flores said that campus sustainability has partnered with the Enviro-Business Society to spread the word out about Recyclemania, and hosted a clean up day along with the Green Committee of SDSU’s School of Social Work.

The Enviro-Business Society also participates at the farmer’s market on Thursdays by playing a trash-sorting game with students.

In addition, residence halls are also having a mini-competition against each other to reduce waste and a price will be awarded to the winner.

CORRECTION: A previous version of this article said RecycleMania is from Feb. 5 to April 17, which is incorrect. RecycleMania is from Feb. 5 to April 1 but the winner announcement is April 17. Also,The Enviro-Business Society plays the trash-sorting game not campus sustainability. SDSU recycles 34 percent of waste, not 26 percent. SDSU was ranked 15 against 77 universities, not thousands.