After six years at San Diego State, Elliot Hirshman has accepted a position at Stevenson University in Maryland. 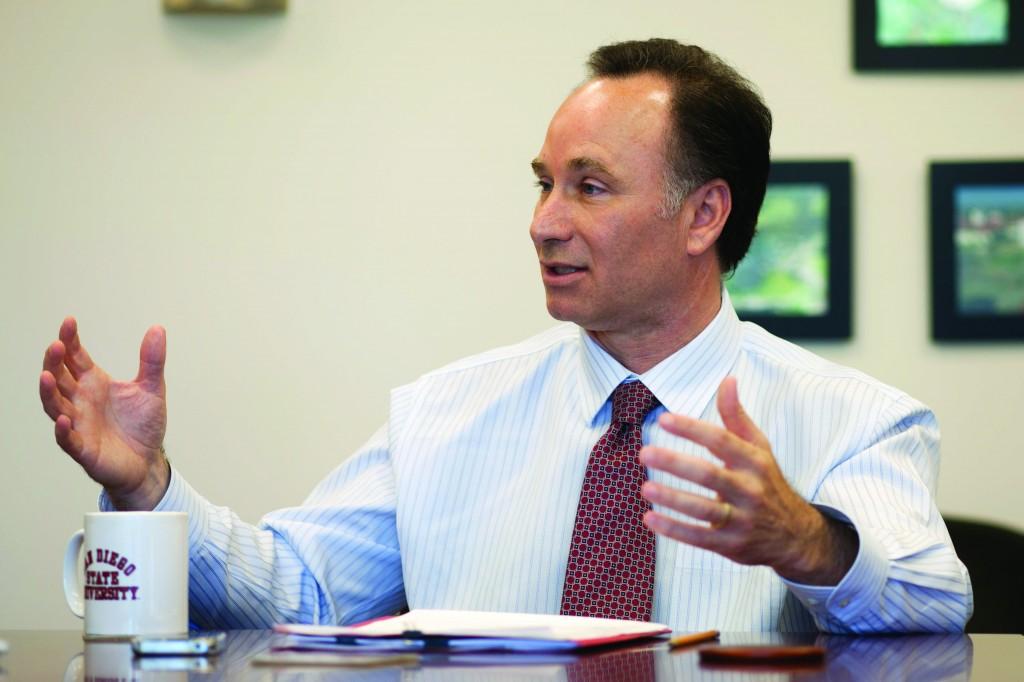 Hirshman, who has served six years as university president, is the second highest paid university president in the California State University system, after Cal Poly San Luis Obispo President Jeffrey Armstrong. In 2015, he made more than $492,000 in total combined pay and benefits, according to Transparent California.

He has accepted a position as president for Stevenson University in Maryland which will begin at the start of July 2017.

Stevenson University’s search for a president began last summer with over 200 candidates. Hirshman was unanimously recommended to the university’s Board of Trustees, according to Stevenson’s website.

A nation-wide search for a new SDSU president will begin “as soon as arrangements can be made in order to discuss with the university community the skills and experiences desirable for an interim presidential appointment,” according to a press release from the university released March 8.

CSU Manager of Public Affairs Elizabeth Chapin said CSU presidents do not work under a contract and serve at the will of the Chancellor so “they can leave at their own will or be dismissed in the same manner.”

A campus-wide email sent out March 8 said Hirshman will end his service at San Diego State on June 30.

“While many factors influence presidential transitions, the progress of our strategic plan, the conclusion of our first comprehensive fundraising campaign and the completion of multiple construction projects all suggest a time to consider new personal and professional opportunities,” Hirshman said in the email.

Hirshman’s predecessor Stephen L. Weber presided over the university for 15 years, before turning over the presidency to Hirshman in 2011. Before Weber, President Thomas B. Day ran the school from 1978-1996.

In the release, CSU Chancellor White said Hirshman’s “focus on academic excellence and life-changing educational opportunities for students from all backgrounds has contributed to SDSU’s emergence as a top public research university.”

Hirshman spearheaded the SDSU campaign that raised $750 million through the Campanile Foundation.

He also launched the school’s strategic plan, “Building on Excellence” which aimed to build student success, research endeavors, community and communication, according to the university website.

Hirshman’s actions were sometimes controversial during his time at SDSU.

In fall 2014, he received a pay raise boosting his salary to $412,000, making him the highest-paid CSU president at the time. The pay raise came in the midst of the newly implemented Student Success Fee, which sparked campus protests.

In spring 2016, a group of students accused Hirshman of failing to strongly condemn fliers posted on campus which accused particular students of being allied with Palestinian terrorists. He attempted to leave campus in a police cruiser as protesters surrounded the car and demanded to speak with him. He eventually left the car and spoke to some of the students, who demanded an apology. At the time, he did not apologize, but he agreed to meet with some of the students. Later that week, local community activists including the National Action Network called for his resignation.

The board of SDSU’s Students for Justice in Palestine said they wish Hirshman the best moving forward, but that the student body will not forget his failure to condemn the defamatory attacks against BDS supporting students by David Horowitz.

“The demonstration that took place against Hirshman last Spring was indicative of his relationship with many student groups on campus,” the board said in a statement.

In fall 2016, the Africana Student Union held a #BlackUnderAttackSDSU protest outside of his office in Manchester Hall in response to campus police’s aggressive force of a black man, Marquis Campbell.

University spokesperson Gina Jacobs said there is not a connection between Hirshman and Block’s departures from the university.

This story was updated with quotes from SDSU’s Students for Justice in Palestine at 11:38 a.m.