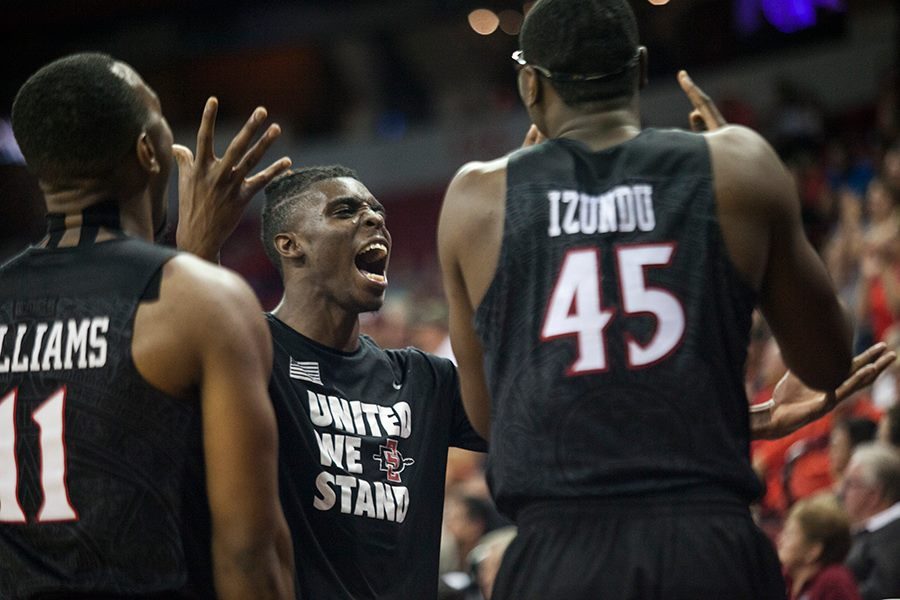 Perhaps it was the return of the body snatchers, the attack of the clones or the magic used in Space Jam, but something was different within the Thomas & Mack Center Thursday night for the San Diego State basketball team in its win against Boise State, 87-68.

Aside from the identical jerseys, the Aztecs were a completely different team against the Broncos for 40 minutes, than the one against UNLV for 45.

SDSU blew the lid off the top from the opening tip as they scored 15 points in the first six minutes, and 42 in the half, where they only tallied 14 in the first 20 minutes against the Runnin’ Rebels the previous night.

Where the previous game they looked to be walking through the motions, tonight the Aztecs appeared determined to make their fans cheer every possession.

Which happened. A lot.

The team that has only managed one solid offensive half a game, strung together two of their best halves on the season. They shot 54.7 percent from the floor, but more surprisingly were 9 of 14 from 3-point range.

“We played the best we played all year, and we picked a nice time to do it,” head coach Steve Fisher said.

Sophomore forward Max Hoetzel was the main contributor to the team’s white-hot mark from deep, as he drained five of his six attempts. He finished the night with a career-high 21 points and 7 of 8 from the floor.

“… I’m sure any of our teammates or coach will tell you, there was a collective energy and vibe that everybody was ready to go,” Hoetzel said. “It was a great feeling, it was something I’ve never really felt all year.”

Aside from the stellar shooting mark, the Aztecs also outrebounded the Broncos 37-24, including a 13-5 edge on the offensive boards, which translated to 21 second chance points.

However, the story of the night was junior forward Malik Pope, who once again shone brightest under the Mountain West tournament lights. The junior notched his second double-double in as many nights with a career-high 22 points and 10 rebounds.

But with 3:43 left in the game and a 73-57 lead, Pope fell to the court holding his knee. After a brief time on the floor and talking with the training staff, he walked to the bench under his own power and managed to give his postgame interview.

Like last game, where senior guard D’Erryl Williams left the game because of an injury to chants of “M-V-P,” Pope received the same honor from the Aztec faithful as he gingerly walked off.

Pope’s, and the Aztecs, reward: a date with No. 2 Colorado State tomorrow night at 9:30 p.m. This is the same Rams squad that beat SDSU in the waning seconds on two separate occasions and dropped 81 against the Air Force Academy earlier tonight.

“It was real minor,” Pope said. “Still talking with the doc. I’m not sure if it’s a minor hyperextension, but it should be good.

“It’s nothing to be worried about for me or my teammates of coach Fish.”

However, in a warmup to tomorrow’s task in shutting down the Mountain West Player of the Year in redshirt senior Gian Clavell of the Rams, the Aztecs first had to stop all-MW first team player junior guard Chandler Hutchinson.

The Mission Viejo native was stymied from the opening tip and shot well below his 50 percent average at a 4-for-13 clip and only attempted one 3-pointer. He ended his night with eight points, four rebounds and found himself in foul trouble late in the game.

Even without their primary scorer, the Broncos put up a worthy effort to make a few fans in attendance sweat profusely in an air-conditioned arena.

At the end of the first half, BSU was shooting an even 50 percent from the floor (13-for-26), from range (6-for-12) and only trailed 42-37. The Broncos had four players with at least six points carry the load, with Hutchinson limited.

However, a slight second half drop-off doomed BSU against the scoring onslaught of Pope, Hoetzel and sophomore guard Jeremy Hemsley, who combined for 30 points.