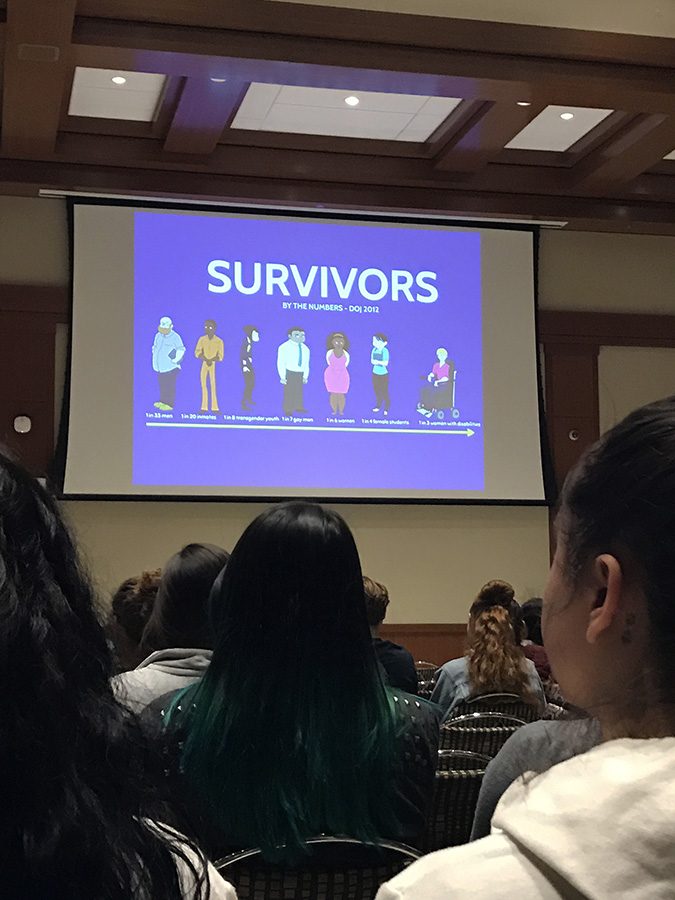 The organization invited a panel of prominent guest speakers to host the event at Montezuma Hall.

From 7 to 9 p.m., PPGA and the audience members faced the stigmas and realities regarding sexual violence in today’s culture during the program.

Audience members were educated on issues of reproductive justice as well as rape culture during the interactive presentation and activities.

The audience was also cautioned in the beginning of the presentation that the evening’s content was to be composed of the topic of sexual violence and that anyone triggered by this was more than welcome to leave at any time.

Elliot, one of the panelists, is currently a sociologist as well as a lecturer at SDSU.

Elliott’s areas of expertise include sex and gender, sexualities, religion and research methods.

Elliott is also a faculty advisor for the SDSU Queer Student Union.

Vargas, the second panelist, is the vice president of community and government relations for Planned Parenthood in the Pacific Southwest.

She is an outspoken leader with a variety of experience in a large range of fields such as public policy and government.

Zamora, the third is a current member of San Diego’s chapter of California Latinas for Reproductive Justice.

She also serves as an assistant coordinator of Compact for Success and Collaborative programs for the division of Student Affairs.

The program began with a question for the panelists. Each panelist was asked to define, “What does reproductive justice mean to you?”

“I realized that reproductive justice had always been part of my experience, having grown up a woman of color and with an undocumented mother,” Zamora said. “We were always raised with the idea that my mother would be taken away from us. This experience of her hiding in fear, of her having the fear of being taken away from her children … this is a form of control of women’s bodies and women’s labor and a form of reproduction oppression.”

Zamora went on to explain that reproductive justice will only exist when society and people have the majority of the power, resources and abilities to make decisions for themselves and their community.

Next, it was Vargas’ turn to address the audience with her own definition of reproductive justice, referencing her degree in feminist and women’s studies.

“When I grow up, I want to be the Latina Gloria Steinem,” Vargas said. “I’m still working on it.”

Vargas was vocal about her experiences within the feminist movement throughout her career.

“What stood out to me the most about this program was how genuine the panelists were,” undeclared sophomore, Erica Lasater said. “It wasn’t like your typical panelists that couldn’t stop spitting out facts. It was real people talking to you about their real lives and I think that made it easier for us to trust them and believe them for it.”

The panelists were then asked how reproductive justice affects college students specifically. Elliott said many college students today are also juggling the issues of parenthood as well as adulthood and navigating their careers.

“There are very few students, anymore, that are the classic, ‘Let me go to class, study somewhat, and party, party!’” said Elliott. “That is not happening, and we need to somehow adjust.”

Elliott also expressed her dismay in regards to financial aid.

She said that in order to set up financial aid, it is required to be a full-time student with the assumption that the average student is unemployed and lacking other responsibilities.

“If we’re going to give access, we need to give more than, ‘Here, I’ll let you through the door,’” she said.

At the conclusion of the panel discussion, the audience was asked to think about the question, “How does reproductive justice intersect with rape culture?” before welcoming YouTube personality Laci Green to the stage.

Laci Green is best known as the mastermind behind the internet’s most popular sex-ed series, “Sex Plus.”

She is a YouTuber, activist and public speaker from Oakland, California who has a certificate in rape and dating violence crisis counseling.

Green began by explaining how rape culture is showcased by the disturbing reality that “a lot of people learn about bodies through the lines of exploitation.”

Throughout her presentation, Green’s wittiness and humor captivated the audience despite the dark nature of the program.

Not only did Green present some cold, hard facts about rape culture, but she did so in a way that made her seem relatable and approachable.

“We really have to get the narrow narrative out of our heads that sexual violence only happens to women,” Green said.

Green then went on to tackle the four main pillars of rape culture while utilizing video clips from social media.

“If you haven’t heard about it, what rock were you living under?” Green said of the case. “Can I join you for a while? I want to hide.”

Green drew from her own experiences as a rape and dating violence crisis counselor.

“Victim blaming is a feeling that a lot of survivors I have worked with have,” Green said. “The pervasive notion that survivors blame themselves. Victim blaming is something people internalize and makes them believe they do not deserve justice.”

Green emphasized that rape culture and the other topics that the panel discussed actually need to be talked about.

“We have to create an environment where it is safer to talk about these things,” she said.

“I truly believe that by talking about these things we will change these norms and we will take down rape culture.”