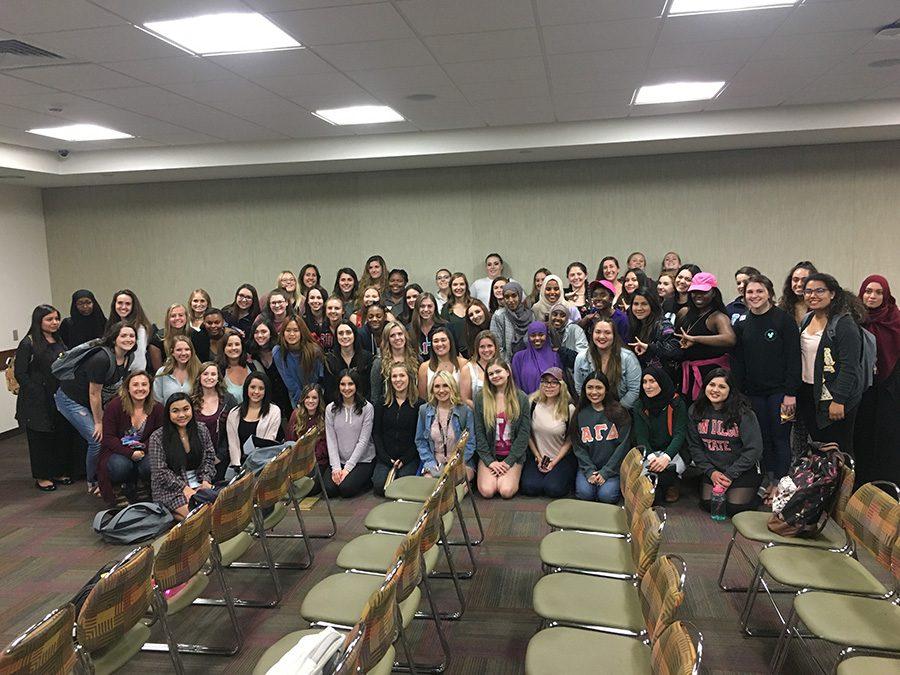 Two student organizations hosted an event aimed at encouraging a more understanding and allied relationship between Muslim and non-Muslim students.

The event consisted of a short film-screening, two student poetry readings and a question-and-answer panel. The audience was almost entirely women, and topics focused on feminist concepts such as agency, oppression and empowerment.

The short film that was screened, “Hijabi World,” was created by Muslim students at Rutgers University, and featured Muslim women discussing what it means to wear the hijab – or headscarf – as well as addressing common misconceptions about Islam.

The women in “Hijabi World” discussed the assumption often made by non-Muslims that the hijab is a form of oppression.

The film said Muslim women have agency in deciding whether or not to wear the hijab, and that the decision is a personal choice.

The final portion of the event was a panel of three students and one recent alumna, all of whom are Muslim and wear a hijab.

The panel included Hussein and Artan, as well as senior sociology major Aisha Sharif and class of 2015 graduate Aleena Nawabi.

The panel said that the most important way for non-Muslims to be allies to Muslims is by building an understanding of Muslims.

“I think it’s especially important to have allies [with] the political tensions that are going on right now,” Artan said. “I think just being open minded and being respectful of other faiths – just treat others how you want to be treated.”

One question asked whether the panel members felt unsafe on campus. The students referenced recent incidents on campus last semester, one in which a student’s headscarf was pulled by her attacker and another where two students made an anti-Muslim comment to a woman in a hijab before stealing her car.

“Yes, given the political climate, I definitely do feel unsafe on-campus and off-campus,” Sharif said. “I think being a Muslim woman, and being a black Muslim woman at that, we definitely walk around with targets on our backs. And it’s definitely an uncomfortable place to be, you don’t want to have to walk from classroom to your car, constantly looking over your shoulder to see if someone’s following you.”

Following the event the audience was invited to a table with dozens of scarves, and Muslim students demonstrated how to put on a headscarf. The audience was allowed to take a scarf home.

Islam Awareness Week is coming up in April, and the Muslim Student Association will be hosting more events that week.