Journalist rides along with SDSUPD 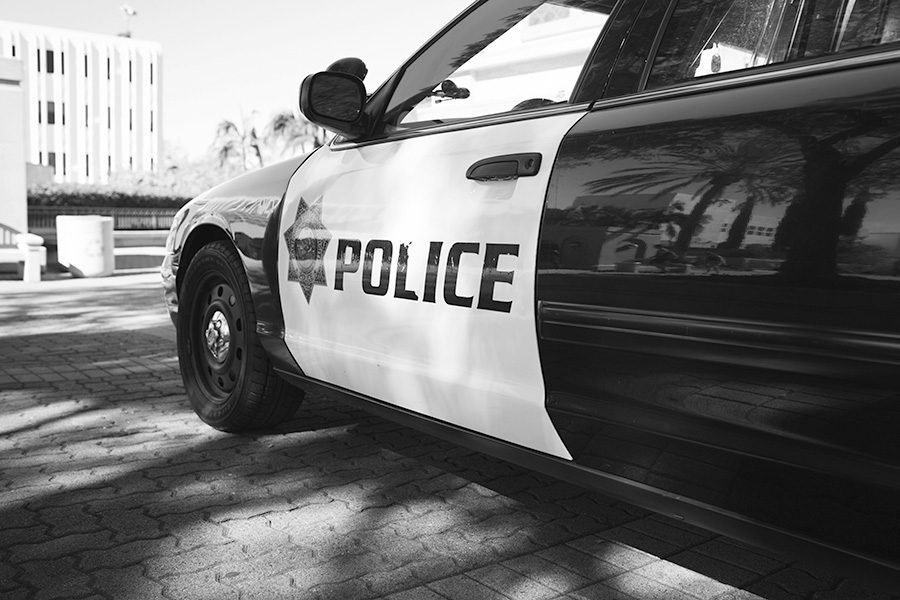 It’s an afternoon in late February, and I’m sitting shotgun in a Ford Crown Victoria police cruiser on a ride-along with the San Diego State police department.

“You cannot send me to prison!” a man shouts from the backseat of the cruiser.

“I did not say I was sending you to prison,” San Diego State police officer Jason Sieckman says.

“I said, you realize that you’re going — literally, like last time, you’re going to jail to sleep in a cell until you’re sober and then they send you out —”

I’ve been listening to the two of them go at it for about ten minutes now.

Sieckman is taking the man, Jerry (not his real name), to county jail after picking him up for public intoxication.

Jerry, who is homeless, has been arrested a number of times for similar offenses, Sieckman says.

Jerry continues to shout expletives from the backseat.

“Officer, I’m calling you every name I possibly can,” he says.

These kind of incidents are a semi-frequent occurrence, Sieckman says.

Just 30 minutes before, he was tied up with a very similar incident, the only difference being the suspect in that case was violent, he says.

“I wouldn’t say it’s super frequent,” he says. “Today it’s frequent. Today we just happened to have two. Honestly, I could go weeks without doing this.”

But throughout Sieckman’s 15-year career, he says such incidents have happened often enough.

Sieckman is a relatively recent hire at SDSUPD — though he worked for the La Mesa police department for 14 years, he was hired at SDSU just seven months ago. He was one of the officers who arrested Marquis Campbell, a man who’s on-campus arrest sparked accusations of police brutality. Campbell was later convicted of a drug charge.

Sieckman and the arrestee continue their dialogue. After a while, Sieckman manages to get the man to be a bit more cooperative.

“Young man?” says Jerry, who looks to be about ten years older than Sieckman.

“No, we don’t,” Jerry says without skipping a beat.

“Well,” Sieckman says. He pauses for a moment. The man shouts more from the backseat.

“I don’t have anything against you. Although I was gonna get off in a half hour, but now I can’t.”

Upon arriving at the jail, Sieckman has an opportunity to discuss his interactions with Jerry and other people he encounters over the course of his job who may try to rile him up.

“Well, for me it’s just, it’s about not taking it seriously,” he says. “You have to have a lot of thick skin because, ultimately what he’s trying to — he’s not a bad guy. He’s got too much alcohol in him. So I don’t hate him.”

However, Sieckman does admit to a bit of sarcasm.

“I’ll be honest with you, I roll my eyes a lot,” he says. “Sometimes I make smart-aleck comments not because I’m trying to be rude but because that’s the way I deal — humor, for me, is a way to get through. You have to have a sense of humor because stay balanced.”

Sieckman deposits all of his weapons in the back of the cruiser before entering the jail. It’s a security precaution, he says, to ensure prisoners are not able to get their hands on anything that could be used against guards or each other.

Jerry is at first cooperative enough as Sieckman raises him out of the cruiser. Then, he has a change of heart, and lets out a loud scream.

Sieckman brushes it off with a bit of his trademark humor.

Sieckman gives the sheriff’s deputies at the county jail a friendly greeting when he walks in.

Meanwhile, Jerry is being mouthy as ever. This time, he is directing his attitude toward me.

His comment is far too profane to print, but the gist of it is he threatens to assault me if he ever sees me at SDSU.

By now, I’ve learned Sieckman’s sarcasm and nonchalant attitude is the proper response.

After processing Jerry at the county jail, Sieckman opens up a little more about the situation.

“The problem with him, too, that’s so difficult, is he’s really nice when he’s sober,” he says.

“You’d probably want to give him money,” he says. “And people do give him money. That’s probably why he hangs around the college. A lot of these students here have really big hearts, and god bless them, you know, but they give him money and what does he do with the money?”

Jerry, he says, will only be held in jail until he sobers up. After that, he’ll be back out on the streets, likely doing exactly what he was doing before. It’s something Sieckman says is very frustrating.

“It’s just a revolving door,” he says. But the problem is the district attorney’s office is so overwhelmed with public intoxication cases, it is impossible to do anything about them.

Sieckman says realistically, the justice system handles these problems by waiting for people like Jerry to do something “truly bad.”

“One day he will get so rip-roaring drunk that he will probably knock someone down,” he says. “And then he’ll be able to be arrested for felony assault or battery or something like that. But it’s unfortunate, but the reality is, yeah, a lot of times you almost can tell that they’re going to go this way, but you can’t really arrest them for something significant until they cross that line.”

It’s something Sieckman says he finds very concerning, especially since he has a 17-year-old son, almost old enough to be attending SDSU.

“I picture my own son at that college, hanging out at (the student union), having something to eat,” he says. “And I’m just terrified to death because he would not be able to deal with this guy, you know, and so I’m sure most other people’s kids wouldn’t either, and it really, really worries me.”

It’s a problem Sieckman says has no easy solutions.

Now we’re on the freeway heading back to campus.

Sieckman receives another call on his radio.

Someone on Alvarado Court is reporting seeing a person armed with a machete. Looks like Sieckman is not going to be off-duty for a little while longer.