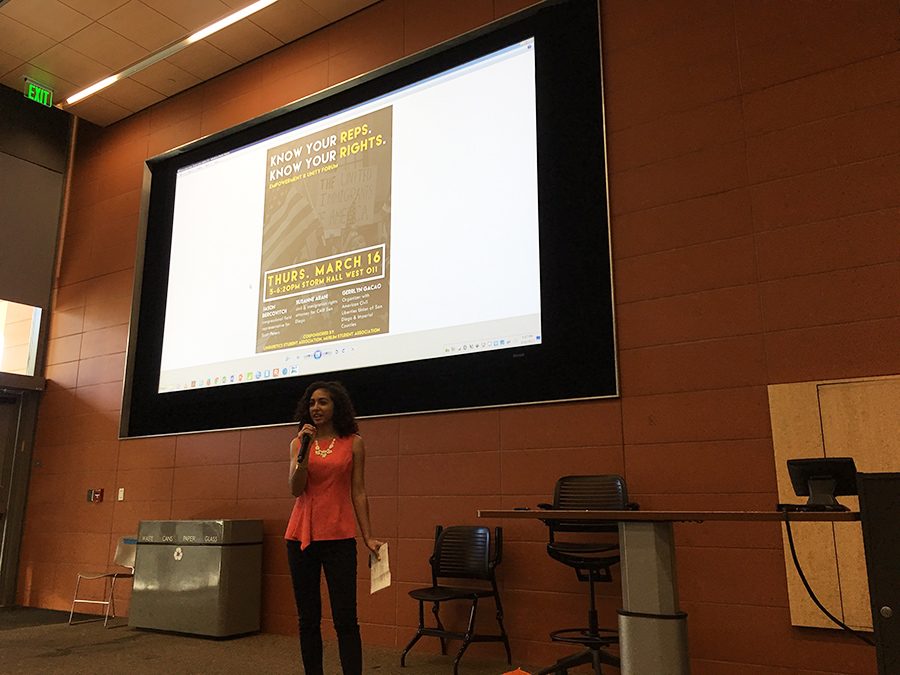 About two dozen students and faculty gathered in a Storm Hall auditorium on March 16 for a forum which aimed to educate immigrants and international students about their rights in the Trump administration era.

The three speakers discussed topics such as the Deferred Action for Childhood Arrivals program, “sanctuary cities” and rights when speaking to law enforcement.

“If you have DACA, you want to try to stay close to home in the U.S.,” she said.

Gacao said for now, any action against individuals with DACA status seems unlikely, and even if there were, universities are not places immigration enforcement has targeted in the past.

“It’s also really unlikely to get a whole picture of who exactly is undocumented on a campus, and who amongst that undocumented community has DACA,” she said.

Gacao also said that in the past, there have been no large-scale enforcement or any mass deportations on any universities or college campuses.

She said in the event President Trump does decide to end the DACA program, the design and implementation of any new policy is going to take time to plan.

“If you currently have DACA, we would just advise for you to just stay calm and out of trouble,” Gacao said. “DACA, as we know it today, is still happening, and you’re getting the same protections you were when you applied.”

Gacao did advise DACA recipients to be careful in their interactions with police.

“I’m not saying stay away from the police, but you want to avoid any negative interactions,” she said. “You just kind of want to lay low, but definitely stay calm about it.”

Bercovitch spent more time discussing politics and instructing attendees on how to interact with supporters of President Trump’s immigration policies.

What is truly important, Bercovitch told attendees, is getting to know and relating personal experiences to those who may share differing political views.

“That’s going to make a difference,” he said. “Because little by little, the more people that we have conversations with, the more opinions that might be changed.”

“Insulting Donald Trump will get you nothing,” he said. “By calling him a bigot, an islamophobe and a liar and a racist and a sexist, you just cut off your entire conversation to whatever group of the people there supported the president.”

“Everybody still wants to help law enforcement,” she said. “However, in times like these, and as any lawyer would say, you need to fight that urge, because generally when you speak to law enforcement, you’re only making a fool of yourself.”

Arani clarified she was speaking more specifically about federal law enforcement such as the FBI and ICE.

“Everyone knows that you can’t lie to law enforcement,” she said “If you do, that’s considered a crime. But some people don’t know that technically, you can’t even make a material omission.”

Because of this, she recommended undocumented individuals to remain silent.

“If you or anybody else that you know ever gets confronted with law enforcement, the best thing is to not say anything.”

She said she came up with the idea after receiving questions about legal rights for undocumented individuals.

“I’m Mexican-Iranian. I’ve received a lot of questions from my community about what it is that they need to do, what can they do, what their rights,” she said. “A lot of students as well have been really flustered. I’ve met with DACA students as well and they just really needed to know their rights (are), what they can do, (and) how to fuel their activism in a constructive manner.”

Ashtari said while turnout was not significant, she was confident the information discussed at the event would be received by students who need it most, as she said there were a number of professors and activists present.

“This information is not going to deaf ears, you know it’s going to be taken and spread among a lot of different people,” she said.

She said many students who could have attended the event may have been afraid to come and show their faces.

“You know, a lot of undocumented students or people that are affected by (the travel ban) don’t want to show up,” she said. “But they did have people in the audience that were representing them.”

She said the speakers covered a lot of relevant information that she can relay to her community and her students.

“I wish all of my students had come, but two of my international students came and I was really happy about that,” she said. “And I think that they gave us some really practical bits of advice that you can take moving forward.”

Milad Sadeghi, an exchange student originally from Iran, said the event  was insightful.

“It’s good to know (your) rights,” he said. “If you just get into trouble at least you have heard some of your rights.”

The legal advice given on how to interact with law enforcement and exercise his rights was something Sadeghi especially appreciated.

“Knowing the rights is not enough,” he said.