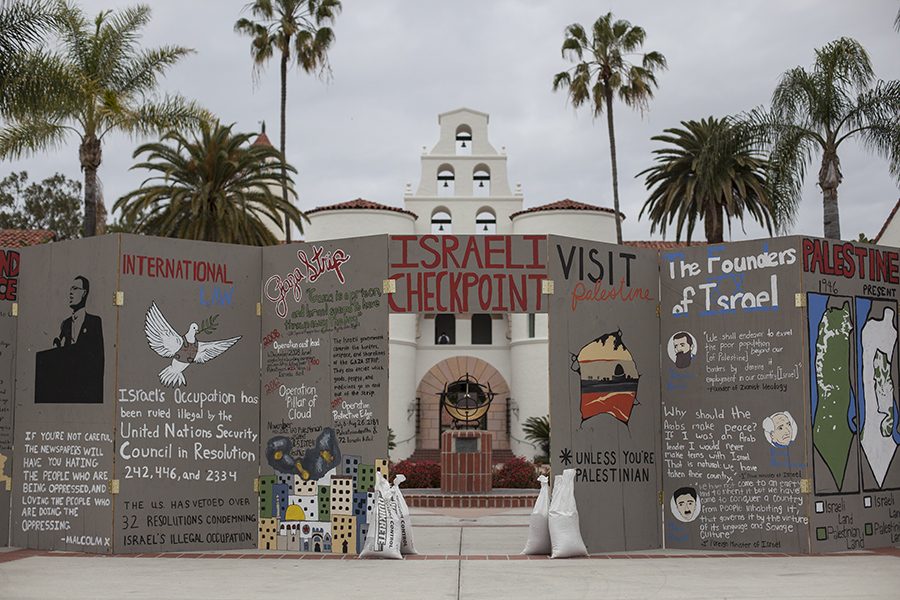 San Diego State Students for Justice in Palestine displayed a mock Israeli apartheid-wall in front of Hepner Hall between March 20 and 23, presenting information regarding the Israeli-Palestinian conflict as part of the organization’s Palestine Solidarity Month.

The wall, which consisted of a series of wooden panels held together by hinges, included artistic depictions of a bombing, a map of California universities that have voted to divest from Israeli companies, as well as quotes attributed to “the founders of Israel.”

Farris Nabulsi, treasurer of SJP and computer science sophomore, said the wall was designed to be a unique way to inform students about the conflict.

“The wall is made to be like more of an artistic depiction and message to educate people,” he said. “All throughout the year, we hold informational events (and) lecture style panels. And this is a different approach to show some appreciation for some art while also showing the reality of what happens in Palestine.”

He said the wall is something SJP has done in years past, but the club put its solidarity month on the back-burner last year because of a desire to devote more resources to combating what he referred to as “conflicts on campus,” including flyers posted last year by the David Horowitz Freedom Center naming some SJP members as “being allied with Palestinian terrorists.”

“We rebuilt it this year, took about a month, and we were happy to be able to put it up again,” Nabulsi said.

International Studies and Conflict Resolution senior Jessamyn Sheldon said as an ISCOR major, she is knowledgeable about international conflicts, but the display makes the conflict seem much more real to her.

“I learn a lot about international conflict that we don’t really get to see a lot in the media, but at the same time, it’s kind of like in a book, like you don’t really feel it at all,” she said. “But stuff like this, it just kind of makes you more aware of what’s actually happening.”

Sheldon said even before viewing the display, she was receptive to Palestine’s cause.

“I honestly always side with Palestine,” she said. “Like, in the general scheme of things, Israel is being controlled by our government right now.”

However, some students said the information presented on the wall was incorrect.

“This wall does have a lot of statements that are taken out of context (and) statistics that are incorrect,” said child and family development sophomore Leah Buchsbaum.

She said the wall’s definition of Zionism is not accurate.

One panel of the wall read “Zionism a racist political ideology formed in 1897.”

“Zionism is not a racist ideology,” Buchsbaum said. “Zionism is the belief that Jewish people should have a homeland. That is what Zionism is. So that is just incorrect.”

The same panel differentiated Judaism, “an ancient religion founded over 3,000 years ago,” from Zionism.

Gal Winrebe, SDSU Hillel agent to Israel, said in addition to quotes on the wall that he said were out of context, he also took issue with a portion of the display stating Palestine has received $0 in aid from the U.S. government since 2000.

“I mean, just last year, before (former president Barack) Obama left his administration, he gave an order to transfer the $221 million,” Winrebe said.

The $221 million transfer to the Palestinian authority was frozen by the administration of President Donald Trump after he took office on Jan. 20.

However, the West Bank and the Gaza Strip received $557 million from the United States in 2015, according to U.S. Agency for International Development statistics.

Students for Justice in Palestine said in a Facebook message that an asterisk was later added to the statistic on foreign aid, stating it was referring to military aid only.

In addition, Winrebe said a statistic on the wall claiming a total of zero Israeli homes have been destroyed by Palestinian rocket attacks since 2000 was incorrect.

“That’s completely wrong because I alone know at least four, and one of them is my cousin’s,” he said.

SJP later said they were unable to find any instances of Israeli homes being demolished, only those of Palestinians.

“You know, people are gonna believe what they want to believe,” said civil engineering junior Ali Fakhrriddine. “As far as I know, whatever’s on the wall is taken from independent sources, you know. They talked about the actual U.N. resolutions that Israel has violated, and it’s true.”

Nabulsi said the information on the wall comes from “various sources.”

“You know, if people want to show us that they’re out of context, we’ll be happy to correct them,” Nabulsi said. “No one has shown us any evidence that they are. So until then, you know, we’re gonna keep it how it is.”