Pumphouse works to establish itself 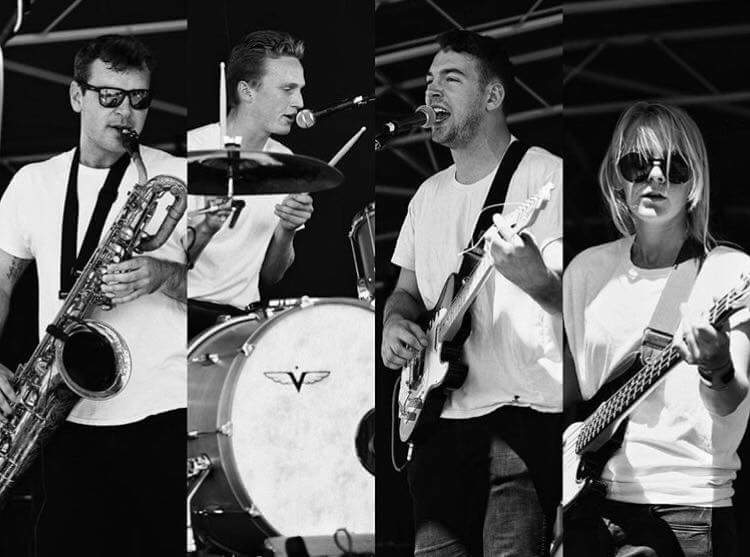 San Diego’s music scene added a refreshingly simplistic rock group to its roster in the spring of 2015.

With its knack for blending the primitive sounds of punk and alternative with a contemporary flair, the local band is as evocative as it is unique.

With a four person line up, Christian Clark carries the dual role of lead guitarist and vocals, San Diego State alumni Declan Halloran plays drums and sings, Ida Naughton slaps the bass and Patrick Hallahan delivers the savory wails of the saxophone with the occasional vocal and keys.

The origins of the band’s name are as faithful to its hometown as the group itself, getting its moniker from a popular local surf break.

“It’s one of those places where if you’re born and raised in La Jolla, and someone says to meet them at Pumphouse, you know exactly where it is,” Halloran said. “It’s an homage to where we were born and raised.”

The predecessor of this on the rise group was designed when Pumphouse’s members were still in high school, a project named Neveready.

Heavily favoring a prominent horn section, the group consisted of seven musicians, a number that Clark, Hallahan and Halloran all agreed was a bit too cramped for creative elbow room.

“We decided that it would be better if we just broke it down. Just stripped it down and had basic rock and roll elements. It made our lives easier because we weren’t limited to certain songs,” Halloran said. “We just wanted to do something a little different, and it gave us a lot more freedom with writing.”

By resorting to this bare-bones mindset, minimalism proved to be an ally to the San Diego natives. Pumphouse’s guitar-dense jams and sing-along lyrics transmit with an uncluttered evenness thanks to its focus on the fundamentals.

The single “Too Broke for Fun” illustrates this perfectly, showcasing a tight-knit coherency circuiting amid the band as Clark belts the catchy refrain. Each player contributes their melodious strains individually, and when stockpiled together, a wholesome tune is born.

This sense of chemistry leaks over into other creative facets as well, specifically with penning lyrical content.

Other songs, such as the rhythmically mellow ballad “Baile Duke,” validate the band’s flexible range in both style and sound.

“It can range from anything. Sound wise it goes from, like, The Stooges, to The Clash, to Rocket from the Crypt,” Halloran said.

Having played such venues as The Salty Frog and Til Two Club, Pumphouse’s next show is scheduled for May 4 at the Pour House in Oceanside.

While it is still a project in the infant stages of its career, the group’s current strategy is to cement a solid reputation as a juggernaut in the live performance setting. In particular, stimulating the audience with its newest jam, “Blackout,” a head-banging rock anthem that usually finds itself at the closing of its sets.

“We’re going to try and expand it in the future and get a whole call-and-response thing with the crowd,” Halloran said. “That’s probably the one that people remember and gets them hooked in.”

The band also plans to release an extended play in the near future.

“We want to let an album go, with copyrights and have it be legit. Also, obviously, play a lot more events and come out with more merchandise designs,” Hallahan said. “We’re writing some new stuff that is really good and I think everybody is progressing and moving forward.”

“I think a realistic goal would be to be a well-established band in San Diego, to a point where people will recognize our name on a venue or something like that,” he said.

With the “Too Broke for Fun” EP expected to drop sometime in the next month, such a goal is one step closer to becoming a reality for these La Jolla rockers.