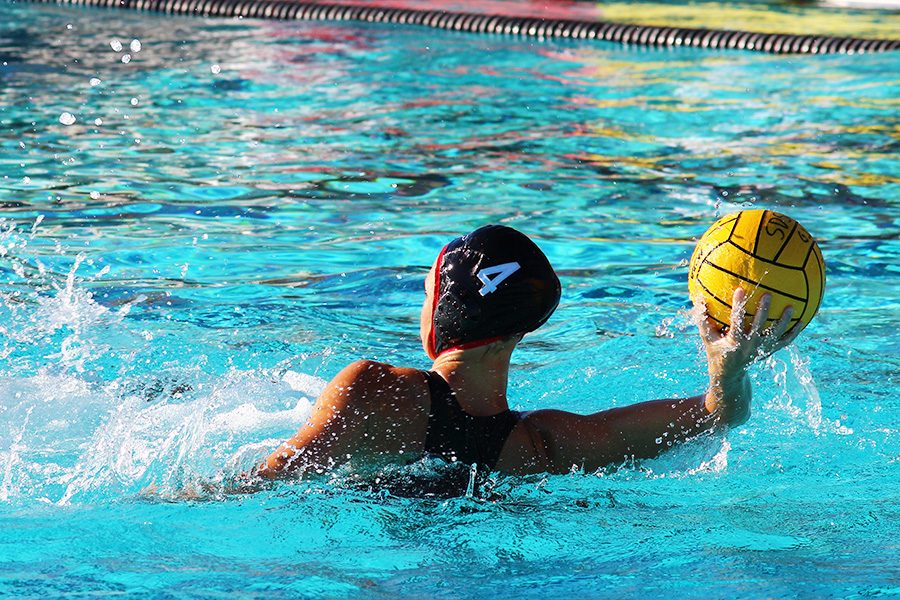 Senior utility Caroline Israels winds up for a throw down the pool.

In one of the most exciting games to have taken place in the Aztec Aquaplex this season, the T-No. 14 San Diego State women’s water polo team defeated the No. 9 University of Pacific on a late goal with under two minutes left in the final period.

The game started off quickly, as both teams found the back of the net in the opening 27 seconds.

Aztecs senior defender Ioli Benekou sent a ball flying past the Tiger’s goalie to give the Aztecs a 1-0 lead, which SDSU (14-12, 5-0 Gold Coast Conference) would hold until late in the final period. Pacific (14-8, 3-1 GCC) answered 20 seconds after Benekou, which set the theme of a back-and-forth contest that played out for the remainder of the game.

At halftime, the game was in SDSU’s favor 5-3, largely due to the outstanding defense of junior goalkeeper Kate McDonnell, who ended the match with a career-high 16 saves. McDonnell was busy all game, seeing 34 shots attempted by the Tigers.

SDSU head coach Carin Crawford had nothing but praise for her goalkeeper.

The third period belonged to the Tigers, as they went on a 2-0 run to tie the game at five heading into the last period.

It was a back and forth contest of shots flying off the posts and no real scoring until Pacific’s Mariana Duarte scored her third goal of the game to put the Tigers up for the first time in the game.

SDSU would answer back with three goals in the fourth period, and the momentum seemed to side with the Scarlet and Black.

All-American Senior Caroline Israels came up huge in the clutch for the Aztecs, and scored the game tying and eventually the game-winning goal in the final period.

The ball was in the hands of Duarte once again, the person who they wanted to have the ball considering she already had scored three goals in the game. She was able to get a shot off, but McDonnell was able to get a hand on it and blocked the potential game-tying shot to seal an Aztec victory.

In its Tuesday match, SDSU rallied to defeat No. 22 CSU Bakersfield, improving its record to 15-12.

The Aztecs fell behind early after CSUB scored twice in the first period, but Benekou put a shot into the back of the net with one second left in the frame.

SDSU kicked it off in the second quarter with a power-play goal from senior center Alyssa Diacono. The Roadrunners struck back 35 seconds later when junior driver Ashley Paz scored the first of three goals, giving CSUB a 3-2 lead at halftime.

In the third period, Paz tacked on two more goals to the Roadrunners’ lead with 4:06 left.

Diacono and Israels led a rally with 3:46 remaining, but by the end of the quarter CSUB still led, 5-4.

Sophomore driver Hannah Carrillo tied up the game in the fourth and the Aztec defenese was able to force multiple turnovers from the Roadrunners.

Diacono scored the winning goal for the Scarlet and Black with 2:51 left.

SDSU will return to action on Thursday when it closes out conference play against Azusa Pacific and Concordia.