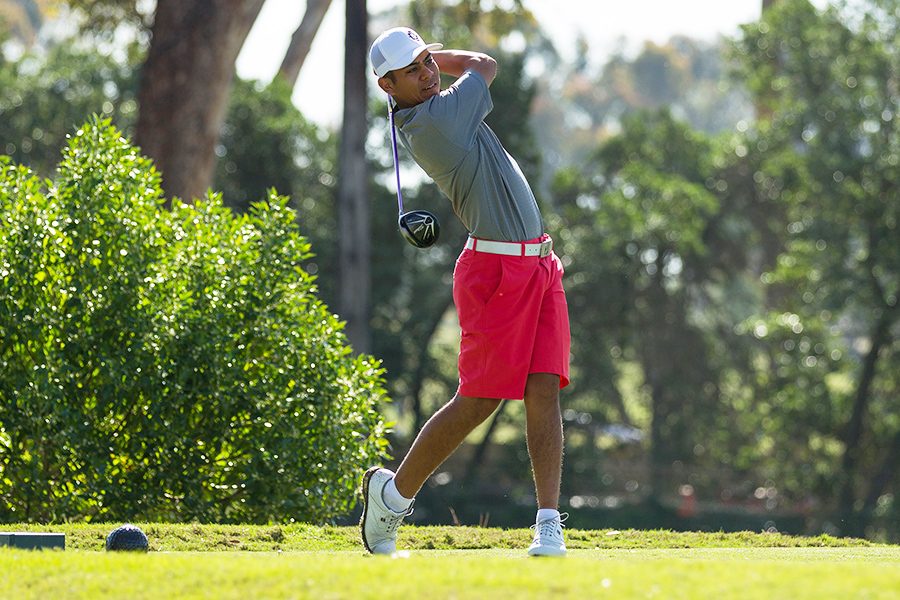 Junior PJ Samiere follows through his tee shot in the first round of the 2016 Lamkin San Diego Classic.

San Diego State men’s golf was back in action this weekend at the Western Intercollegiate in Santa Cruz, California. Pasatiempo Golf Course proved to be a challenging one as the Aztecs settled with a 12th-place finish (+59) out of 15 teams.

As the Intercollegiate wrapped up this Sunday, so did the PGA Masters Tournament in Augusta, Georgia. Sergio Garcia of Spain took the green jacket in dramatic fashion over England’s Justin Rose in a one-hole playoff.

SDSU did not see such drama in their play as they were unable to keep pace with many of the other competitors.

And after finding recent success by placing fifth in the Lamkin San Diego Classic followed by a fourth-place finish at the Oregon Duck Invitational, the Aztecs went backwards this weekend. The Northern California course was hilly and included a wet climate, making play more difficult than normal.

Junior PJ Samiere said that the wind “played a large factor” when hitting the ball, which made it harder to stay on the fairway. He also added that the greens were fast, meaning the ball rolled quicker and over a longer distance.

Another obstacle rose on day one of the two-day tournament as darkness fell upon the course during the second round. This misfortune suspended play for the day and had to be continued on day two.

Nonetheless, the Scarlet and Black started off in 12th (+33) and remained in that position at the end of competition, failing to gain any traction on opposing teams. Some of the other schools competing were UCLA, USC, University of Oregon, Stanford University and Pepperdine.

The Trojans of Sothern California claimed first (E) from the weekend. Way behind them was Stanford in second (+18) followed by Oregon in third (+20).

“This tournament gave us a good feel of where we stand, especially against teams of a high level,” Samiere said. “We just have to make smarter decisions and tighten up a few things.”

Individually, seniors Nahum Mendoza III and Gunn Yang as well as Samiere led the way for the Aztecs in a tie for 47th place (+11).

Despite starting off in ninth after the conclusion of day one, Samiere struggled in the second and third rounds as he holes multiple bogeyed.

Mendoza was quite the opposite, he found himself in 76th among the leaderboard heading into the second day. He responded with several birdies, including four in the final 18 holes.

“Yes, it was a tough course, but our confidence wasn’t shaken,” Samiere said. “We’re going to learn from this and work on our flaws. It only makes us hungrier to perform better.”

The Aztec junior said the team must “take advantage” of the opportunities to sink birdies in order to improve results. He said that in the next two weeks of practice, the main focuses are to be “more aggressive on the fairway” and “more consistent” with the driver.

Although it was not the outcome the Aztec players and coaches were looking for, they remain positive and prepare for the annual Mountain West Championships in Tucson, Arizona, from April 21 through 23.

“We have the talent to win it all,” Samiere said. “Now we just have to go out and prove it.”