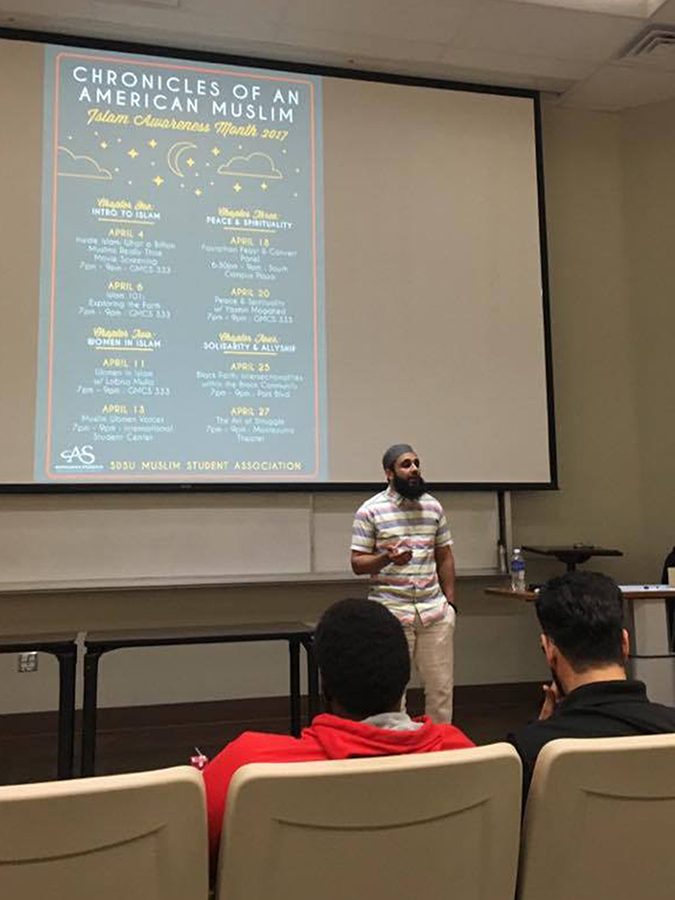 The SDSU Muslim Student Association came together to host Islam 101: Exploring the Faith on Thursday, April 6.

The speaker for the event was Asim Billoo, a medical dosimetrist at the UC San Diego

Billoo spoke about the faith in general and tried to clear doubts attendees had on the topic.

He said he has accepted Islam as a way of life and as his identity.

“If someone challenges your identity anybody would want to not only clarify, but go beyond clarification and truly explain the beauty and why you have made something your identity, regardless of which religion you are from,” Billoo said.

He said he wants to try and raise awareness to clarify misconceptions about Islam which are portrayed by the media.

Ahmed Buzeriba, public health senior and event organizer, spoke about some of the challenges he and his team faced while putting together the event.

“Luckily, we have a solid board, committee heads and members. The biggest problem is advertising and marketing,” he said. “It’s always hard to tell students to come to an event after a full day of class,” he said.

Buzeriba said the association chose to hold the event from 7 to 9 p.m., so many students would be out of class.

“This is the first time that we are having an awareness month, as opposed to an awareness week,” he said. “We have around 30 to 40 attendees on average.”

“Even if we help only one person, it is worth the efforts,” Barase said.

The association sold T-shirts and buttons, and passed out roses during the week to notify students about its upcoming events.

“We are also asking professors to give extra credits to students who attend this, as an added incentive,” Barase said. “The big picture is to help students, connect with people and answer questions pertaining to the topic.”

International Security and Conflict Resolution senior Shaila Homan,  said she was excited to be a part of the discussion.

“I have been definitely trying to learn more about Islam and the muslim culture. I went to a mosque about a month ago for exploration,” she said “I don’t know much about the culture. I grew up practicing the Christian faith, and I just think this is an effective way to learn about the religion.”

The hour-long discussion concluded with a small question and answer round during which Billoo answered questions submitted anonymously by the attendees before the event.

This discussion is a part of eight events in the Islam Awareness series.

Upcoming events include “Muslim Women Voices”’ and “Fastathon Feast and Convert Panel” on April 13 and 18.