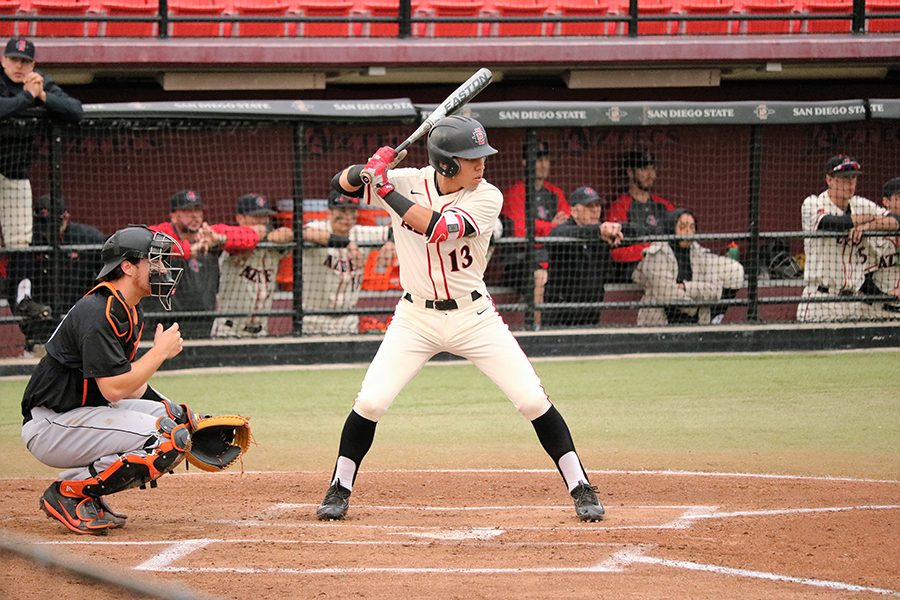 Junior pitcher Alan Trejo waits for a pitch against the University of Pacific.

The San Diego State baseball team won two out of three games during a weekend series against the University of Nevada, Reno between April 7 through 9.

In the Friday night opener, the Aztecs got on the board in the bottom of the second inning when junior right fielder Chase Calabuig singled home junior left fielder Tyler Adkison to give the Scarlet and Black an early lead.

The early run was answered in the top of the fourth by Nevada junior right fielder Mike Echavia’s RBI single to knot the game at one a piece.

SDSU would quickly put the game to bed in the bottom half of the inning. The Aztecs plated two runs on a throwing error by Nevada junior third baseman Jordan Pearce and later added two more on RBI singles from sophomore first baseman Jordan Verdon and freshman catcher Ryan Orr.

Senior shortstop Danny Sheehan added to the Aztec lead in the sixth inning with a solo home run, and the Aztecs went on to win the game by a final of 6-3.

Senior starting pitcher Brett Seeburger collected the win after six plus innings of two-run ball to improve to 6-1 on the season. Senior closer CJ Saylor pitched a perfect 1-2-3 ninth inning to notch his ninth save of the season.

Nevada was able to push a run across in the fourth inning when junior center fielder Cole Krzmarzick narrowly beat out an infield grounder for a single and advanced to third on an errant pick off attempt by Purpura before coming home on a sacrifice fly by freshman first baseman Dillan Shrum.

Sheehan scored in the bottom half of the seventh after opening up the inning with a double. Verdon moved him over with a fly ball to center field and Adkison knocked him in with a sacrifice fly to left field to tie the low-scoring affair at one.

The score stayed that way until the top of the 11th when Echavia led off with a single and later came home on a two-run home run to right center by Shrum. The late home run coupled with 2 2/3 innings of scoreless relief work by freshman reliever Grant Ford gave the Wolf Pack the 3-1 victory.

The Aztecs had golden opportunities to win the game in both the ninth and 10th innings.

In the ninth, the bases were loaded with one out and Ford was able to get senior third baseman Andrew Brown to bounce into a double play.

The 10th brought another chance, as runners were on first and second with one out, but Ford was able to again force an Aztec into an inning-ending double play, this time by sophomore catcher Dean Nevarez.

The Aztecs had early opportunities in the contest, putting runners on first and second in both the first and third innings, but they couldn’t bring them home.

In the fourth, senior designated hitter Andrew Martinez got in scoring position with a two-out double but was later left stranded. SDSU was able to put two runners in scoring position in the bottom of the fifth inning thanks to a throwing error by senior shortstop Justin Bridgman, but they were again unable to score.

Nevada finally broke the scoreless tie in the top of the sixth inning when Pearce opened the inning with a home run to right field.

After junior right fielder Grant Fennell added a double, Thompson’s day was done after 5 2/3 innings and two earned runs. Sophomore reliever Harrison Pyatt gave up an RBI single to Shrum before getting out of the inning with a two-run deficit.

The Aztecs immediately answered back in the bottom half of the inning when Adkison hit a solo home run to left field followed by singles from junior catcher Hunter Stratton and junior right fielder David Hensley.

After a double switch, freshman Jacob Maekawa was brought in to play second and Trejo was moved to the mound in the seventh for the Aztecs. Ohl’s day was also done for the Wolf Pack after six innings and one run, giving way to senior reliever Ty Pennington.

In the bottom half of the eighth, Nevarez evened the score at two with an RBI single, and Hensley moved him to third with a single off Bridgman’s glove. After an intentional walk to Trejo to load the bases, Brown drove in two more with a single through the right side.

Sheehan followed that with a chopper over Bridgman’s head at shortstop to plate another run. Then, Verdon hit a liner to center field that scored Brown. A wild pitch scored Sheehan before the Aztecs’ scoring barrage finally ended, heading to the ninth with a 7-2 lead that they would not relinquish.

After the series, pitching coach Sam Pereza talked about his senior starters.

“They all bought in (to our system) and they go as hard as they can go for as long as they can go,” Pereza said. “I think the biggest help for them is knowing that they have a really good bullpen behind them who can come in and put games away.”