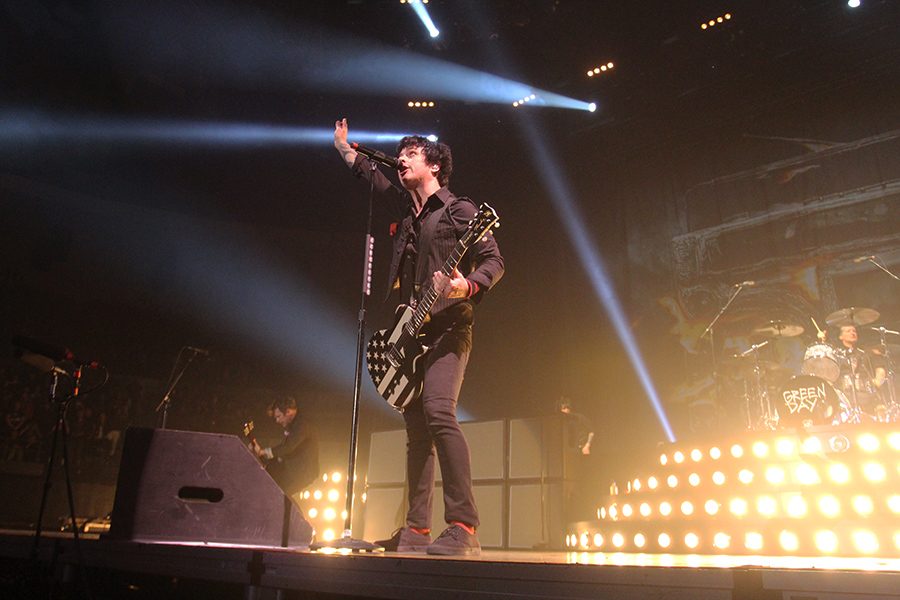 On Saturday, April 8, Green Day took the stage at Valley View Casino Center, and made it clear that the night was about more than just music, it was a call for unity.

The Oakland trio is no stranger to addressing politics in their music, so it was not a surprise for them to start off the night with the politically charged “Know Your Enemy,” the only song they would play off their 2009 album “21st Century Breakdown.”

Opening with “Know Your Enemy” also prefaced that, although they are touring in promotion of 2016’s “Revolution Radio,” the set list would be a journey through Green Day’s many hits and fan favorites spanning over three decades.

It did not take long for frontman Billie Joe Armstrong to start interacting with the crowd. Right off the bat he picked a young boy out of the crowd to sing a few bars with him and subsequently crowd surf back to his spot.

“Green Day did a great job of engaging the crowd,” international security and conflict resolution sophomore, Brandon Battaglia, said. “They were more than just musicians, they were entertainers.”

After playing the “Revolution Radio” single “Bang Bang” and the album’s title track, the band went into a string of songs off their iconic 2004 release “American Idiot”: “Holiday,” “Letterbomb” and “Boulevard of Broken Dreams.”

“American Idiot” is famous for its commentary on the Bush administration, but Armstrong made sure to emphasize the renewed relevance of the album’s politics.

“No racism, no sexism, no homophobia,” he said to the crowd during “Holiday,” echoing the phrase printed on the back of T-shirts being sold at the show.

Armstrong’s tokens of sociopolitical wisdom were a recurring theme throughout the night, offering quips in celebration of individuality in an attempt to provide much needed harmony.

“We may have to change some people’s definition of what it means to be an American,” he said. “I know who I stand for, I stand for the freaks and the weirdos.”

Armstrong again looked to the crowd for assistance during the song, honoring a long-practiced Green Day tradition to have a fan sing a “Longview” verse.

The trio returned to “Revolution Radio” tracks with “Youngblood,” before once again dedicating the night to their loyal fans, playing pre-commercial success deep cut “2,000 Light Years Away” off of 1991’s “Kerplunk.”

“This one’s for all the people who saw us at the Che Café back in 1992,” Armstrong said before performing the song.

The band continued the night with more fan favorites, playing “Hitchin’ a Ride” off of 1997’s “Nimrod,” then back to “Dookie” with “When I Come Around” and “Burnout.”

“Is that a camera phone?” Armstrong asked a fan presumably filming the band. “Why save something for later when you can live it right now?”

One of the highlights of the night was the boisterous, shout-along performance of “Minority” from 2000’s “Warning,” with the crowd chanting choruses of “I want to be the minority, I don’t need your authority.”

“I believe rock and roll can save the world,” Armstrong said. “Whether you’re a conservative or a liberal, at some point we’ve got to come together.”

The band hurdled its energy forward with “American Idiot” tracks “Are We the Waiting” and “St. Jimmy,” the latter being one of the most vigorous songs in the entire Green Day catalog and appropriately treated as such.

The trio then went into a cover of Operation Ivy’s “Knowledge,” and again looked to participation from the audience.

He passed the guitar over to a 13-year-old fan, jamming for a few minutes before telling him he can keep the guitar.

The set rounded out with “Nimrod’s” “King for a Day,” which progressed into a mashup of The Isley Brothers’ “Shout,” The Rolling Stones’ “(I Can’t Get No) Satisfaction” and The Beatles’ “Hey Jude,” much of which Armstrong performed laying face down on the stage.

The Green Day members walked off the stage after two more “Revolution Radio” tracks, “Still Breathing” and “Forever Now,” but soon returned for an anticipated encore.

Armstrong’s singing was deemed unnecessary as the band soared into the opening chords of “American Idiot” and the crowd sang the entire first verse without his guidance.

It was obvious the night was far from over when they jumped into the entire nine-minute epic “Jesus of Suburbia,” with drummer Tre Cool getting a chance to showcase his talent during the breakdown before the “City of the Damned” section of the song.

Armstrong took the stage solo to end the two and a half hour set with “Warning’s” “Good Riddance (Time of Your Life),” but was soon rejoined with heart-warming hugs from his bandmates before the song could end, visibly projecting the example of unity Green Day had been preaching the entire night.