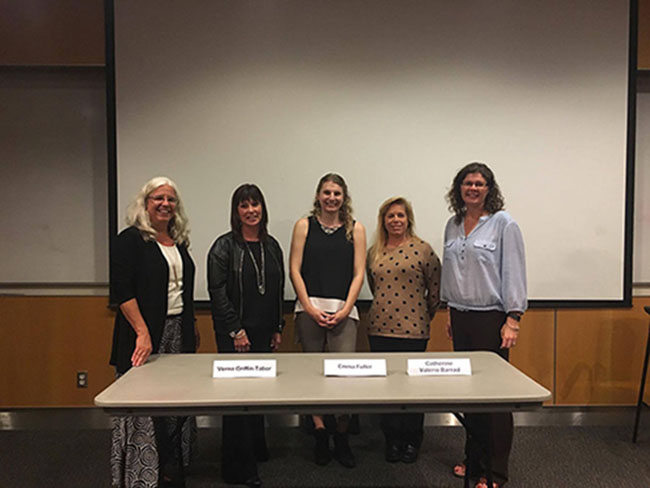 A question-and-answer panel on sexual assault titled “Sexual Assault in the Current Political Climate,” was held as part of Take Back the Week on April 13.

More than 100 students, faculty and community members attended the event organized by the Women’s Resource Center in the Fowler Athletic Center.

The panelists focused on sexual assault at SDSU, resources available to victims and legal concerns.

“One of the big issues that’s facing our office today is, without a crystal ball, we’re trying to figure out what is going to happen with the current administration to the emphasis on Title IX that has been part of the Obama administration and other administrations prior to that,” she said.

Barrad said that while Title IX is currently enforced by the Department of Education through financial funding to universities, any change on a federal level will not impact SDSU’s compliance with Title IX as it is currently interpreted.

Guidelines made for Title IX in 2011 require universities to independently investigate and address sexual assault and violence on campus.

She said though there is a new administration focusing on different priorities than the past one, it should not have a constricting effect on how Title IX is evaluated and implemented at SDSU.

Some questions focused on expanding access to resources for survivors of sexual assault who are not women, and changing the language of policies to be more inclusive of gender nonconforming people.

Emma Fuller is a women’s studies graduate student who works in the office of Assemblywoman Lorena Gonzalez Fletcher. She said that there is currently a trend toward increasing the use of gender-neutral pronouns in legal documents.

“A lot of the language still in new laws about sexual violence might still be focusing on women,” Fuller said. “But there’s definitely been a shift to make it gender-neutral, because there is acknowledgement that it’s not just women.”

She asked the panel what resources a student has if they are assaulted on campus while under the influence of illegal drugs or while drinking underage.

CEO of the Center for Community Solutions Verna Griffin Tabor said the Rape Crisis Center run by CCS will support the victim in whatever they choose to do.

She said students who are afraid of retaliation do not need to decide right away whether to report a sexual assault to the police, but can prepare for that option by getting a rape kit at a hospital.

Other questions focused on the fear of victim blaming or other forms of retaliation against victims of sexual assault by the university.

“I think the advocate on campus is the best neutral party to help students navigate whatever system they’re interested in pursuing, just because they can support students in all of their options,” she said.