Kent running for more than records 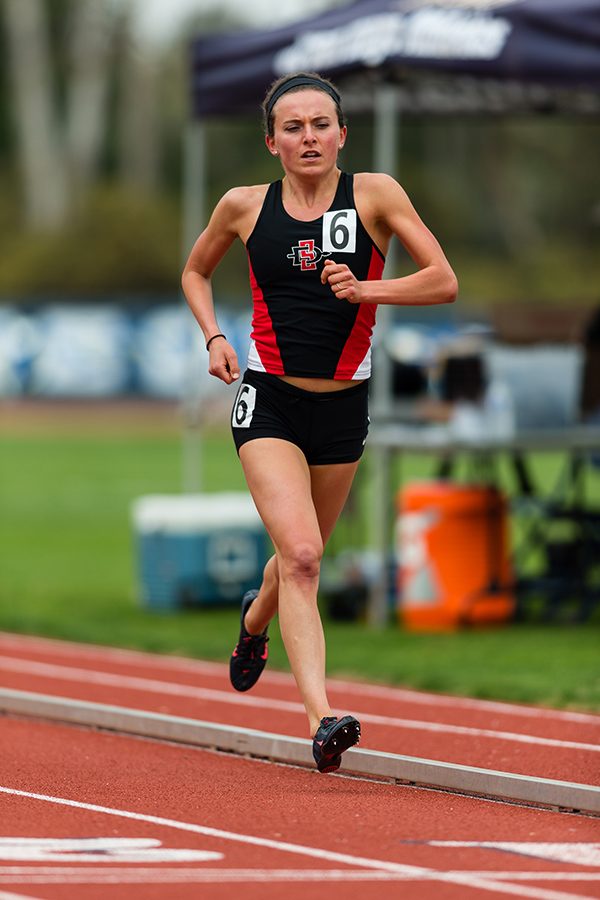 In the era of one-and-done, the term student-athlete is becoming more scrutinized, however for one Aztec, the term is literal.

San Diego State track and field’s Christine Kent, who also ran for the cross-country team last semester, is a graduate student working on her master’s degree in nutritional science.

As a part of the cross-country team, she was the first Aztec finisher in five of their seven races and the university’s record holder in the 6K.

Kent’s most recent success on the track was a top-10 finish in the 5,000-meter race at the Bryan Clay Invitational on April 13. Her time of 16:55.51 was the eighth-fastest in program history and her personal best.

While competing against others is the primary goal of a track and field athlete, the race against oneself for personal records also plays a role.

“I’ll sometimes go into a race and think wow, this competition is amazing,” Kent said. “These are some of the top girls in the nation, I’ll be happy to be last. There is no losing when you excel your personal record.

But breaking records, school or personal, doesn’t come alone. Sometimes its takes a team even in an individual sport.

“Winding down to the last few seconds, the pressure is present when crossing the finish line,” Kent said. “Having a cheering squad or coach that has been training you – that knows your capability – hearing all of their encouragement pushes you even more.”

While Kent’s life has revolved around academics and running for years, her story on the track began on the pitch. To train for soccer, she started to run and the passion for the sport crept in.

“You feel free when you’re in that time frame, that is why I crave the races,” Kent said. “You feel free in this power moment and get to be competitive. Your body is entirely the sport. You’re not relying on anyone else and what comes out of it is so beautiful.”

After placing in the top-10 in the 5,000-meter race, Kent has set her aim on higher rankings and loftier goals.

“It was my first 5K and I feel honored to be here to do that,” she said. “I’m a fifth year graduate senior. Overall, it’s proving what I’m capable of and I can’t wait to show what else I can do.”

As her achievements atop the Mesa began to rack up, her teammates and coaches began to notice her competiveness.

Track and field head coach Shelia Burrell said Kent is always looking to better herself and is mature enough to know what she wants.

The maturity helped Kent with the return to Southern California from South Carolina. It was a long process, which consisted of back-and-forth emails between the coaches along with transferring her to a junior college, which led her into the graduate program at SDSU.