Aztecs buck the Broncos in Idaho 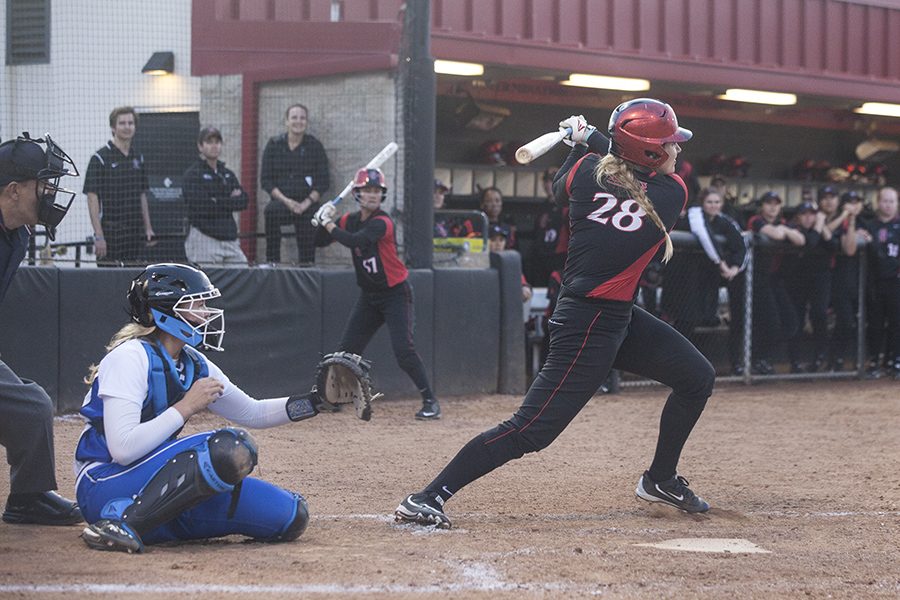 Senior catcher Frankie Orlando following through on her swing after a hit against UCLA.

San Diego State walked in fresh off a victory sweep over University of New Mexico from the previous weekend series.

The women of the Mesa were tied for second place in the MW standings with San Jose State.

SDSU headed to Boise State to play against the Broncos April 21 through 23.

SDSU walked on the field with determination and a streak of confidence having won its last five games.

Romero was the starting pitcher for the 15th time. Aztecs’ head coach Kathy Van Wyk mentioned how she learned a lot from watching Romero.

“Romero’s had her ups and down, but continues to battle and come back, come through with things this year,” Van Wyk said. “She’s shown me a tremendous amount.”

Junior left fielder Zaria Meshack and sophomore utility player Katie Byrd each scored a run to lock in the Aztecs’ first lead of the game at 2-0 in the top of the first inning. However, after a couple of strikeouts and a groundout, they were shut down.

With no luck in the second inning, Boise State stacked up five runs while taking its lead to 5-2.

With a scoreless third and fourth for the Scarlet and Black, the Broncos were able to get in one more run.

In the seventh and last inning, the Aztecs looked to close out the game with a win. Sophomore third baseman Molly Sturdivant doubled to right field which allowed for Peres and Byrd to score.

Romero had allowed five runs for the game while junior pitcher Alex Formby gave up one run on five hits.

Van Wyk was optimistic despite the loss.

“We needed to learn from it,” Van Wyk said. “We’ve got more games to play. We’ve got to keep fighting, keep battling back.”

Van Wyk was ready to prove to the Broncos that it was wrong that they lost on Friday.

The women of the Mesa came back strong for their second game on Saturday against Boise State with a shutout victory.

“They played with a different mentality than when they came in on Friday,” Van Wyk said.

In the top of the first inning, Sturdivant hit a fly ball to right field, which allowed for Byrd to score. SDSU took the lead 1-0 and planned to stay on top for the rest of the game.

In the second inning, the Aztecs kept the adrenaline rush and its agility going.

Redshirt freshman center fielder Kiera Wright singled to left field to help junior designated hitter Taylor Stewart come across home plate for the score. Meshack then singled to the left side, picking up a RBI with a run from freshman shortstop Shelby Thompson.

The Broncos decided to switch out pitchers in hopes of striking out the Aztecs’ momentum.

Due to an error by the shortstop, Byrd reached first base while senior right fielder Jaylene Ignacio scored.

The Aztecs finished out the second inning 4-0.

At this point, the Broncos switched pitchers again, but to no avail. The Scarlet and Black were too focused and amped up to let anyone rain on their parade.

Sophomore pitcher Julie McDonald was put in for Moreno.

With a scoreless Boise State, the women of the Mesa had no mercy.

Moreno had four strikeouts, while McDonald had one. Both pitchers kept the pressure on the Broncos throughout the entire game.

SDSU redeemed itself by winning the game, 14-0.

“We played with some pride,” Van Wyk said.

The Aztecs came out on top for the weekend series by defeating the Broncos 10-6 on Sunday, April 23.

SDSU showed just how ready they were to win with Byrd, Meshack and Peres bringing in runs for the first and second innings. These three players continued to stand out for the rest of the game.

In the third inning, Byrd’s hit allowed for Thompson to score. Peres doubled to left field while Meshack and Wright scored.

Things started to slow down a bit in the fourth inning with the Scarlet and Black getting in only one run from freshman designated hitter Megan Smith.

After seven innings, the Aztecs won.

Van Wyk said she was satisfied with how their defense had been playing and limiting errors. She didn’t feel as if there was any change with the team since the beginning of the season.

The Aztecs will start its next series Friday against Utah State, which is ranked No. 1 in the Mountain West.