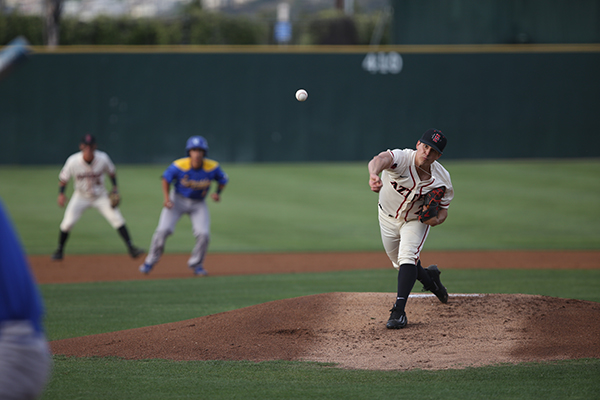 In its first non-conference three game series since their three game sweep of Cal Poly back in early March, San Diego State Baseball won two of three against UCSB this last weekend.

The Aztecs drew first blood in the top of the second, thanks to junior outfielder Tyler Adkison and freshman outfielder Julian Escobedo.

After Adkison singled and stole second, Escobedo hit a two out single up the middle to drive him in. SDSU kept the pressure on in the fifth inning, taking advantage of a miscue by the Gauchos’ defense.

In the top half of the frame junior second baseman Alan Trejo singled with one out. Senior third baseman Andrew Brown followed that up with a ground ball that was misplayed by USCB second baseman Colton Burns.

The error would come back to bite the Gauchos, as sophomore first baseman Jordan Verdon and Adkison hit back to back singles following the error to put the Aztecs up 3-0.

However, UCSB wasn’t about to go down without a fight.

That tie went into the ninth inning, where Verdon would be the hero, driving in senior shortstop Danny Sheehan to take the lead. After junior outfielder Chase Calabuig added an insurance run with a sac fly, senior closer CJ Saylor recorded his tenth save of the season in the 5-3 win.

In the second game the Aztecs didn’t fare as well, facing an early 5-0 deficit after UCSB scored one run in the second inning and two in the fourth and sixth.

The Scarlet and Black flipped the script from last game though, as they would be the ones to mount a comeback.

In the top of the seventh inning, SDSU received two out RBI singles from freshman infielder Jacob Maekawa and Brown. With the Aztecs down by three runs now, Sheehan saw a pitch he liked and promptly sent it over the fence in left field for his third home run of the season to tie the game at five.

However, the Gauchos answered back immediately in the bottom half of the seventh, taking the lead at 6-5. While SDSU would get its chances in the last two innings, they couldn’t muster anything across, losing by the same score.

All runs were charged to senior lefty Dominic Purpura, who suffered his first loss of the season, dropping to 6-1 on the year.

The rubber match of the series was a back and forth effort, with the lead changing four times throughout the contest in the 5-4 victory on the Aztec’s part.

UCSB struck first blood in the bottom of the first to take a quick 1-0 lead, one that was erased in the top of the third when SDSU answered back with two runs of its own, thanks to a pair of two out rbi singles from Sheehan and Verdon.

In the bottom of the frame, the Gauchos immediately answered back with three runs off of senior starter Cody Thompson to take a 4-2 lead.

The Aztecs scratched across another run in the top half of the fifth and would take the lead the following inning. Escobedo drove home senior designated hitter Andrew Martinez with a triple to tie, and then was subsequently driven home on a two out RBI single from Calabuig to take the lead.

SDSU’s bullpen held strong after that, throwing four scoreless innings between Reyes, Trejo and Saylor to record the series win.

The last game was the thirteenth win in the last 16 games for the Aztecs (29-12), who now head back to San Diego for a four game homestand.

On Friday night the team will take on the University of New Mexico, who are currently the top dogs in the Mountain West.