The Daily Aztec • May 1, 2017 • https://thedailyaztec.com/82880/news/sdsu-pow-wow-celebrates-native-american-culture/ 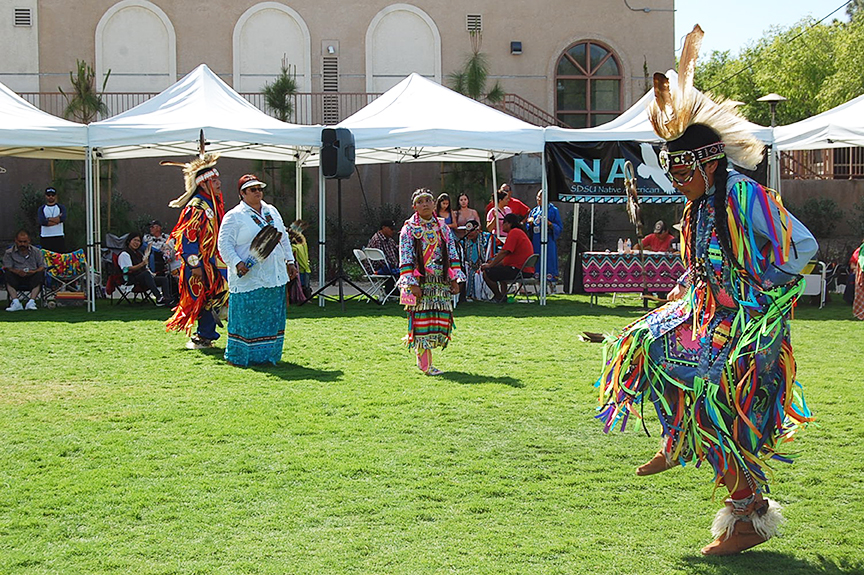 The festival included Native American music, dancing, prayers, food, jewelry and clothes from various tribes. It was sponsored by SDSU’s Native American Student Alliance, the American Indian Alumni Chapter and the Viejas Band of Kumeyaay Indians, and was open to the public to share Native American culture with students of all backgrounds.

One purpose of the event was to change stereotypes and ideas people have about Native Americans, SDSU NASA President Marissa Mendoza said.

“It exposes people to our culture and the non-Native student body to what we do as individuals and Native Americans,” she said.

The pow wow took place just days after the Associated Students University Council’s April 19 rejection of a resolution — which was sponsored by SDSU NASA — to retire the Aztec mascot and moniker.

English and American Indian Studies sophomore Lane Yazzie said the pow wow is part of the healing process after the resolution’s failure.

“We have celebrations for warriors who come back from war (at the event),” he said. “So it is tied to this because we were at war during the resolution.

The pow wow also featured Kumeyaay bird songs, as well as drums placed on the north and south sides of a field as representations of the northern and southern plains style of music. Performers wore traditional Native American attire.

Though the pow wow was a public event, attendees were told not to take photographs or film video during certain ceremonies out of respect for Native American culture.

Additional tents were set up with Native American food, clothes and jewelry, all of which were made during the pow wow.

Mendoza said almost everything for sale or on display was made by Native American business owners.

Bichitty said as a Native American student, it is easy to feel isolated on campus.

“This is the first time in a really long time that we come together as Natives outside meeting rooms and classrooms,” she said.

“There was an appreciation of multicultural organizations and students,” he said.