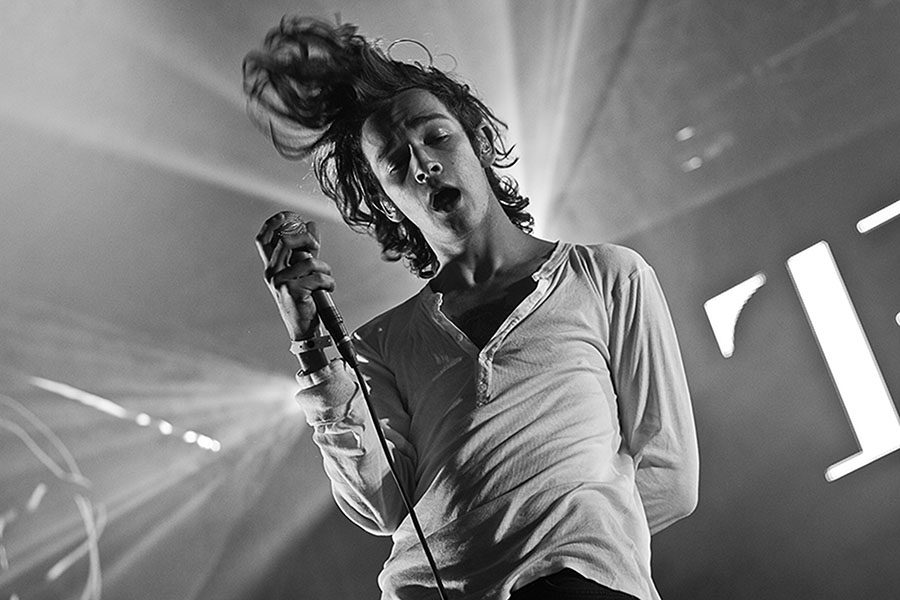 As I watched The 1975’s frontman Matty Healy flail his lanky limbs around and sang along to my favorite tracks from last year’s “I Like It When You Sleep, for You Are So Beautiful yet So Unaware of It,” I remembered all the comments I heard in 2016 criticizing the album, most of which came from my own mouth.

I don’t blame my past self, it’s easy to look at “I Like it When…” on the surface and groan. Long, pretentious album title with 17 similarly long tracks, four of which are drawn-out ambient tracks that I still hit skip on.

But what led to my change of heart, and ultimately to attending The 1975’s concert at Cal Coast Credit Union Open Air Theater on April 25, is realizing that I was looking at Healy’s excessiveness all wrong.

A good, attentive listen to “I Like it When…” presents Healy’s indulgences as self-referential — sometimes literally so, like when he references “Robbers” from The 1975’s eponymous debut album on “A Change of Heart.” Even a look at “The Sound’s” music video proves that Healy is well aware of how his band is perceived, as it is interspersed with various criticisms the band has received, not unlike mine from just a year ago.

Maybe pretension is still there, but like in so many songs on “I Like it When…” what Healy really wants know is who is willing to look beneath the surface for something more than what meets the eye. This same indulgence was evident in The 1975’s live show and echoed many of the themes of “I Like it When…”

The Manchester natives opened with one of their most bombastic tracks, “Love Me,” the first single from “I Like it When…”

The song contains the line, “You’ve got a beautiful face but got nothing to say,” a lyric which is oddly reminiscent of the album’s title, though the presentation of the line and the title differ in snarkiness.

An early stand-out performance of the show was “Heart Out” in which Healy poses the question, “Why don’t you figure my heart out?” Although the song appears on The 1975’s first album, the premise applies to “I Like it When…” as well — Healy is not going to hand-hold the listener through his complexities, they’re going to have to figure him out themselves.

That said, Healy does leave a lot of clues. It was no coincidence that “A Change of Heart” and “Robbers” were played back-to-back, the former completely dissecting Healy’s perception of communication.

“You said I’m full of diseases, your eyes were full of regret,” he sang. “And then you took a picture of your salad and put it on the internet.”

It’s these small moments of modern communication that cut the deepest for Healy. A status update is just an online appearance, until it rattles around his brain, and he wonders what more it could possibly mean.

Fulfilling its stereotype, the band did not hesitate to play all four ambient tracks from “I Like it When…,” during which was a lot of standing around and restlessness from the crowd.

The inclusion of these tracks in the set list made me wonder, as I do when I listen to the album in full, why are these songs important?

These musical intermissions made me itch for something more and maybe that’s what Healy wanted. I had to get past what was supposedly characteristic of The 1975 in order to reach the meat of what it really is, what Healy wants to save for someone who will stick around to dig deeper.

“Somebody Else” was a crowd favorite for its unison shouts of “F—k that, get money!” in response to Healy advising fans, “Get someone you love, get someone you need.”

“Somebody Else” explores communication in a similar way to “A Change of Heart,” taking mindless habits in social situations and making them hit much harder in the context of emotional turmoil.

Again, Healy’s mind goes to work — what on his lover’s phone could be more important than his preoccupation with the growing distance in their relationship? Or even worse, who?

The way Healy addresses how he is perceived, as “a sycophantic, prophetic, Socratic junkie wannabe” as he calls himself on “The Sound,” mirrors the way petty, annoying communicative behaviors rule his relationships with people.

Image-based judgments without solid foundation can’t hold up, much like a relationship with someone who has a beautiful face but has nothing to say. The evidence is right in front of us, but we’re too busy being caught up with the exterior.

The night ended with the most jubilant performance of the set, “The Sound,” Healy leaving the crowd with a lyric I would like to extend to my 2016 self in regards to The 1975: “Don’t you tell me that you just don’t get it ‘cause I know you do.”