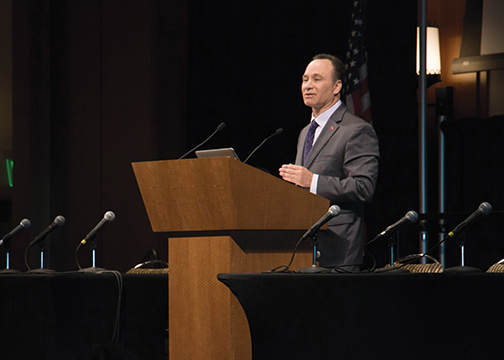 The following is an interview of outgoing SDSU President Elliot Hirshman by Will Fritz and Jacob Sisneros of The Daily Aztec. It has been edited and condensed for clarity and brevity.

How did you end up here at SDSU?

I was an undergraduate at Yale. I studied mathematics and economics. And then I went to UCLA, where I got a Ph.D. in cognitive psychology. And then I had a post-doctoral at NYU, sponsored by the National Institute of Mental Health. And after that, I became a professor at the University of North Carolina, Chapel Hill in their department of psychology. So I was there for about 10 years and then became a department chair both at the University of Colorado, Denver and then at George Washington University.

How has that background in psychology helped you with your job?

So I often joke that I have degrees in economics, mathematics and psychology, and I use all three in equal measure. Certainly, with economics— at the university it’s a fairly large concern. It’s often surprising for people to learn the university and its auxiliaries have a budget of $850 million. So in that context, of course, there’s much where economics come into play in terms of what people want or the markets that you need to satisfy and meet. So certainly that grounding is helpful. The psychology, I think, is self-evident in the sense that there are all manner of human motivations and interests that intersect in the office of the president, and so to have some familiarity with those topics is helpful. And then, mathematics, I think, is the most interesting in some ways, because it’s a discipline that focuses on logic and consistency. And often, what the president has to do is help people to see that even though they feel passionately about something and they wish to pursue it, it may not be as well thought-out as one would hope. And so sometimes it helps to have a process to try to think things through and make sure they’re logical and consistent, and so that’s where the three, in their different forms, come in on a daily basis for sure.

Why did you make the decision to move to Stevenson University in Maryland?

Through the end of my six years, I was thinking that a lot of things that we set out to do with the strategic plan, with some of our larger construction projects like South Campus Plaza, those things were coming to a close, so it was a natural time for me to say: might I consider another position? And then of course, they were interested in me and the opportunity was exciting for me. I think of a presidency as having a natural life cycle. A beginning, middle and end. And I felt that, while I certainly could have stayed a bit longer, we had done a lot of what we had set out to do. And you know, maybe it is time for someone with different perspectives and different ideas to come to the university.

Some students, who are seeing their tuition rise, are critical of the university’s spending decisions. What do you say to them?

If I comment on that in general, I would say universities are very expensive, as a general principle. We of course want to make them as efficient and inexpensive as possible. But the fact of the matter is that a faculty member who is going to teach at a university — it is a competitive market and they need to have a certain salary. If you want to build a building that is a strong, robust building — that will have the features you want it to have — you’re going to have to compete in a construction market for that opportunity. So, if you think about all of the things that we have at a university, we obviously have things like a police force to keep people safe. We have dormitories. We have all the electrical and the lights. All that costs significant amounts of money. So the economics of a university is challenging, there’s no question.

One year ago, you were surrounded in a police car by a crowd of protesters. What was that like?

The life of a university president is very exciting. And it’s very varied and dramatic. So, for example, very few people have the opportunity to give a speech to 10,000 people and to do it 10 days in a row. There are things that a university president does that the average person just doesn’t get an opportunity to experience, both for better and for worse. So whenever an experience like that occurs, I am generally… pretty much let it flow. So I don’t try to make a judgement in the moment. I don’t try to analyze it in the moment. What I try to do is just work through the situation as best as possible. And so my framework about events in general is a little bit different from a standard framework someone might have because on any given day, I might have four or five things that happen that are pretty extreme. And so if I were constantly analyzing the things that are happening to me, I really wouldn’t be able to function in the role. So what I try to do is just move through it. So in that case, what I was thinking about is: am I safe? How will I get from here to my next event? Obviously, what is the nature of this concern that people are expressing and how can it be addressed? So in the moment, there are always things that are happening that you want to be attending to and that’s what I try to keep focused on.

What are your thoughts on the anti-Semitism resolution and speech on campus?

I think I want to respond by talking a little bit about the tensions we have, as a campus and nationally. You really have two different philosophical views. On the one hand, you have people who, I would say, are classical defenders of free speech. And they say the regulation of speech by the university should be content-neutral. Essentially, no matter what you say, even if it’s hate speech, it should be protected. And then there are other people who take a different perspective, and they say certain speech is in some way harming them. And so it’s just as if you hit them in the face when you say something that is hurtful. And that kind of perspective is where the tension comes in, because clearly everybody will say if you hit someone in the face, that’s not a protected expression, because it’s a violence. And so the question is: Is someone’s speech toward someone else a form of violence? And if it is, how should it be regulated? And I don’t think we as a society yet have an answer to this. I think we’re really wrestling with it. What I would say, having been around this block many, many times is, I worry about the idea that somebody, whether it’s a university president or some other authority, will determine which speech gets restricted. And that’s my biggest concern.

The Aztec mascot debate has been one of the biggest stories of the semester. What would be the process for changing it?

So let me share that I think we are on the right track in terms of having discussions through shared governance. We want people to have an opportunity to weigh in. And so far, obviously, a small portion of student government representatives have commented on it. We’ve obviously received many comments from other students, from alumni and so on. So that will be part of the process. The University Senate will also look at this, and they’ll have resolutions. I do think this, if it’s going to go forward in any form, is a long term endeavor. It’s something where people will really want to think it through and decide what they wish to do and maybe there will be compromise solutions that will come forward. Certainly I can share that there are people who are very extreme on both sides. But it’s also probably the case that the vast majority of people are seeing both sides and trying to think it through. And I’m not sure there are just two sides, in the sense that there are a variety of different perspectives on it.

What advice would you give to the next president on dealing with this issue?

Well the first thing I would say is: Let the process in shared governance go forward. Presidents have strong opinions of course. But I don’t know that’s the first opinion that should come forward. And then the second thing I would say is: If it is the case that there is a shared governance endorsement of changes, then it would be best to bring together some sort of a task force or group of experts who could think through exactly how to do it. Because in the moment of emotion, in the moment of strong feelings, people aren’t necessarily thinking about (what the process will be). And so I think those things will all be very important. It’s natural when people are passionate in either side that they want immediate action and they want it to happen, but I think for the university’s sake, whatever comes out of the shared governance should be thought through. And let me give you an example that people may not see. Let’s say we went through this process and it was decided that we should retain the Aztec identity. However, through that process, you could also say there are ways or things that we’re pursuing with the Aztec identity that maybe aren’t the best. So maybe what we would have is a task force to say: If we’re keeping the Aztec identity, how can we correct some of the challenges? I’ll give you one example that I have mentioned people — does it really make sense to use the term ‘mascot’ in terms of referring to the Aztec warrior. Is the Aztec warrior a mascot, or is it a spirit leader? And the reason I give that as an example is you might think about things — in terms of what the Aztec warrior does and how we talk about it and how you think about it — very differently if you thought about the idea of a spirit leader versus the term mascot, which is more pejorative. Now again, this is something for the next president to think through, but I do think there are things where, if you think about it differently, you may act differently and you may have a different impact on people.