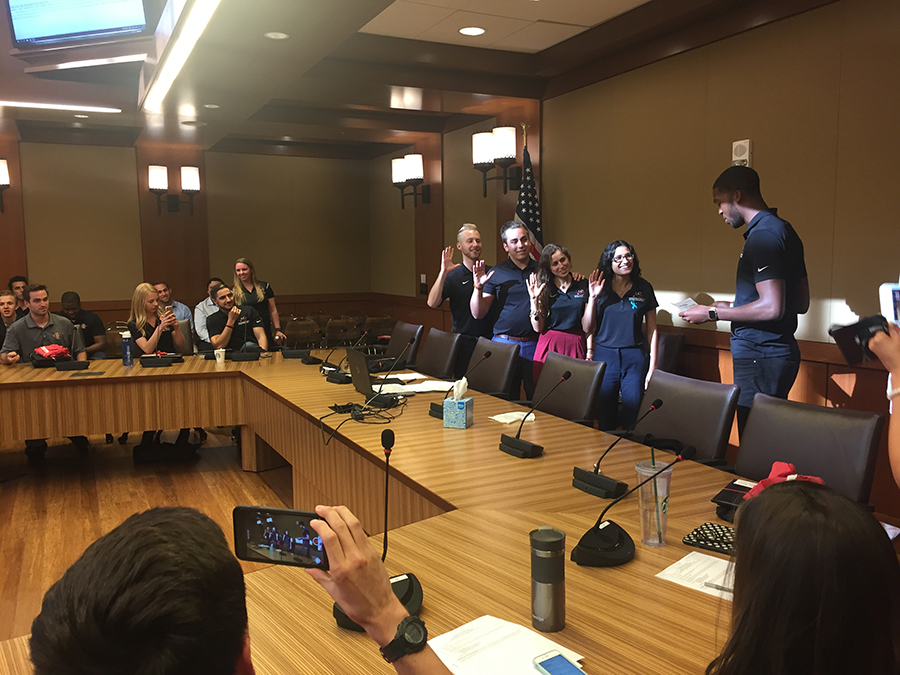 Associated Students met for a general assembly meeting on April 26 to say their final farewells, reflect on the school year and swear in the 2017-2018 A.S. executive officers.

Outgoing Campus Community Commission Chair Curtis Copin said that A.S. has been a great organization to be a part of.

“I am so grateful to every single one of you for making me who I am today,” Copin said. “Because I am such a radically different person than I was just six months ago because of A.S.”

Outgoing A.S. Board of Directors Member Daniel Matlock said he was proud to look around the room and see his mentors and mentees.

“It is really sad to be graduating and leaving something I have devoted my entire college career to,” Matlock said. “I just want to thank every person in this room for all you’ve done for me.”

Outgoing Vice President of External Relations Dylan Colliflower said this year was “the most amazing experience of his life.”

“A lot of you probably came into your roles this year not expecting the roller coaster we went through,” Colliflower said. “I know I wasn’t. But as challenging as this year was, serving as a leader, I wouldn’t change it for the world.“

A.S. Executive Director Christina Brown told Associated Students members to be proud of themselves and what they accomplished for SDSU.

“This was the hardest year yet, in my nine years here, for you all as student leaders,” Brown said. “Some days I get sad with all of the negativity but I know it is all about the passion. I don’t worry about going forward because I have never seen A.S. students give up, no matter what.”

“To (incoming A.S. officers), get ready, it’s going to be a great year,” Thomas said.

“I know it was a little bit nerve-wracking going with a roll-call vote, but you all stood your ground and had a reason behind your vote,” Ebiriekwe said. “Whether other people were in the room who hated you because of the vote you cast, you all still cast that vote out of respect for yourself and your college council.”

“It has been a tough year, but a good year,” Miller said. “It feels weird at this point to be done with my team.”

After being sworn in by Miller, Ebiriekwe reflected on how he felt.

“It feels weird honestly, but the real work starts now,” Ebiriekwe said. “I’m happy that I can finally say I’m president, and I look forward to all the lasting memories and achievements my team and I will have.”