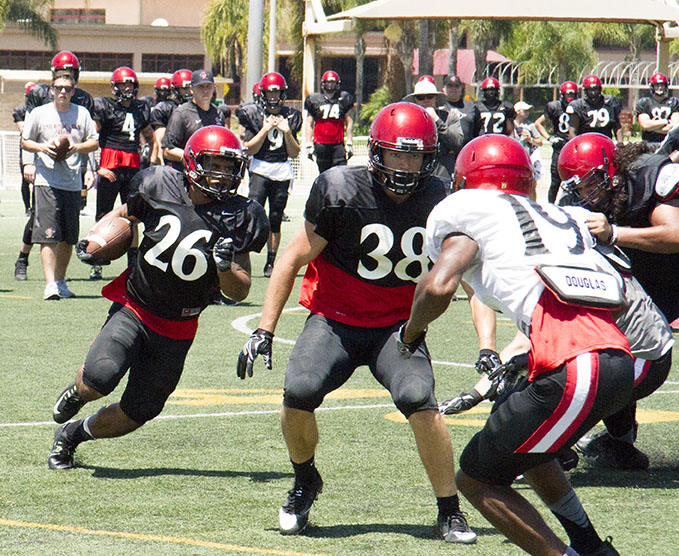 Of the three players only one is a projected starter, junior offensive lineman Ryan Pope.

Pope’s absence will thin an already young and inexperienced offensive line with only one returning starter in senior tackle Antonio Rosales.

Pope was diagnosed on Saturday afternoon.

“At 1 p.m. we had a walk through and they came in and said they were sick.”

Morris came down with the virus on Friday afternoon with Harper and Pope reporting on Saturday.

These three cases add onto a collection of injuries hampering Aztecs after the first week of practice.

Most notably senior wide receivers Mikah Holder and Quest Truxton, who are two of a slew of players to come down with hamstring injuries. Both are day-to-day, and neither participated in offensive plays during the scrimmage on Saturday night.

Holder did, however, hold for junior kicker John Baron II on field goal and PAT attempts. He is expected to be the primary holder this season for the Aztecs.

Fellow pass catcher, senior tight end David Wells, is suffering from a jones fracture and is expected to be sidelined until the first game.

Junior defensive lineman Anthony Luke has a meniscus tear that was operated on and is expected to be back in 2-4 weeks.

On a positive note, redshirt freshman defensive back Taylor Hawkins, who tore his ACL and MCL during spring practice, is one month ahead of schedule and may be able to return at some point during the season, as relayed by Long.

The Aztecs will hold fall practice for two more weeks before hosting UC Davis in their season opener on Saturday, September 2.

The first chance fans will get to see SDSU will be at the annual fan fest at Qualcomm on Saturday, August 19.

Tuesday practice is expected to take place as planned.