SDSU would benefit from shared stadium with MLS 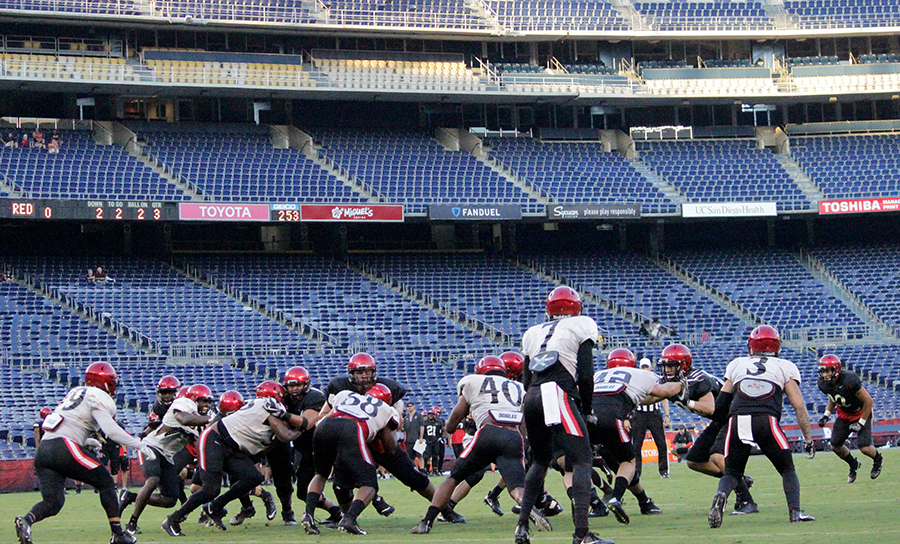 After the newly-dubbed Los Angeles Chargers bolted Qualcomm Stadium for Carson, California, San Diego State quickly turned around with the slogan “One city, one team,” in support of the football program.

The saying is a great way to get the San Diego community fired up about the Aztecs, who ended the college football season in the AP top 25 for the first time since 1977. However, why limit the city to one football team?

Well, not the kind of football that already ditched the finest city in America. Rather, another kind of football, what’s also known as ‘soccer’ in the states. A joint venture between SDSU and a Major League Soccer team would be a unique and beneficial solution.

One of the biggest problems facing Aztec football is the issue of Qualcomm itself. What used to be the fifth oldest stadium in the NFL is now the sole home of the Scarlet and Black.

There’s many reasons why the Chargers decided to leave, and the quality of the stadium is one of them.

In an article in the San Diego Union Tribune, Former City Manager Jack McGrory said that maintaining Qualcomm would cost around $12 million a year for the school. This is dwarfed by the estimated $150 million for a new stadium that could be shared with an MLS team, but if that hypothetical stadium is established it would be worth it in the long term.

One reason why it would is that the Aztecs’ contract to play at Qualcomm is up after the 2018 season. Because of the aforementioned $12 million that the school doesn’t even know if it could pay, SDSU football might be without a home after the lease is up.

What a shame that would be for a program that has skyrocketed its stock in the last few years.

This isn’t saying a stadium that is purely for SDSU’s use isn’t a bad thing; it’s what most big football schools across the country do and have been doing for sometime.

Unfortunately, it’s not nearly as realistic based on the money. If the university and city are willing to fund and pay for a stadium solely for the Aztecs, why not invest in bringing an MLS team as well? Not only would the stadium be utilized more, it gives San Diegans another event to go to during the summer, as the MLS season starts in March and goes through October.

The size of this stadium would be perfect for a college team and soccer team alike. Anyone who’s been to Qualcomm knows it doesn’t feel like a college environment because the third deck is consistently vacant.

A shared stadium would solve that problem for SDSU while simultaneously providing an entirely new vibe for San Diegans to embrace in soccer.

It’s also unfortunate that the stadium is three trolley stops away from the actual campus. Soccer City or some variation of it helps solve this problem as well, as the design includes housing spaces which would no doubt contain a majority of Aztecs.

It’s more convenient, more realistic, and possesses the opportunity to expand a new sport in a city that one could argue drastically needs one, because one thing is for certain: if SDSU isn’t sharing a stadium with a soccer team, there won’t be a soccer team.

When one football team leaves, there’s the opportunity for another one to take its place. The city of San Diego would absolutely embrace the new football team, keeping SDSU on the rise at the same time. It just might not be the kind of football San Diego expected.