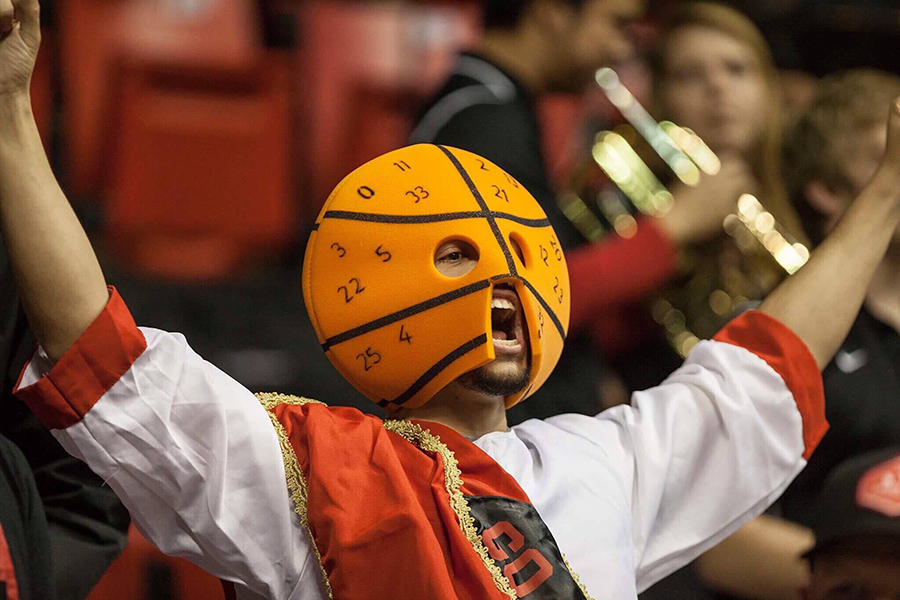 A member of The Show, SDSU's famed student section, cheers during a basketball game in the 2016-17 season.

Starting school at San Diego State is already a daunting experience. Finding classrooms, jobs and the motivation to go to class is hard enough, much less learning all the SDSU sports jargon that is coming your way. To make things easier, here are the major names and terms you need to know to start your SDSU career.

The home of the Aztecs since 1967, the stadium formerly known as San Diego Stadium and Jack Murphy stadium has also housed the NFL’s Chargers and the MLB’s San Diego Padres. Just off of I-15 North, Qualcomm has hosted three Super Bowls and two World Series, and is the only stadium to host both events in the same year (1998). Qualcomm only owns the naming rights to the Stadium until the end of 2017, and the Aztecs may find a new home sometime soon after that.

To get there on public transport, take the trolley’s green line towards 12th and Imperial for three stops.

The name of the famed SDSU basketball student section, named the best NCAA student section by Bleacher Report in 2014. The trademarkers of the “I Believe that we will win” chant, as well as the creators of many other unique traditions, The Show had its heyday from 2010-11 to 2014-15, during which time the Aztecs had an 80-6 record in home games.

Also known as the Mad House on the Mesa, the 12,414 – seat venue owned by Associated Students houses SDSU basketball home games among other concerts and events. Viejas — originally named Cox Arena — opened in 1997 sits right next to the Arc, SDSU’s state-of-the-art gym. Viejas is also the home of the box office where students line up for free football and basketball tickets for home games.

The home of SDSU men’s and women’s soccer, as well as the track and field team. Sitting atop Parking Structure 5 — right across the street from Viejas and the ARC —  this minimalist field holds near 1,000 fans in bleacher-style seating with standing room behind each goal.

The Sports Deck’s greatest moment came on Sept. 2, 2016, when the men’s soccer team defeated the Akron Zips, then ranked No. 1 in the nation. The Sports Deck has hosted the Mountain West Conference women’s soccer championship in five of the last six seasons as well.

The most well-regarded man to ever run the bases in San Diego laid the groundwork for his career at SDSU in the late 70s. Gwynn not only starred on the baseball team, but the basketball team as well, setting every major assists record in his four years at SDSU, once recording 18 in one game.

Gwynn was drafted by both the San Diego Padres and San Diego Clippers on June 10, 1981 after being named a first-team All-American baseball player and setting SDSU’s record for assists in a season.

After a hall-of-fame MLB career, Mr. Padre came back to coach SDSU’s baseball team in 2002. Gwynn led the Aztecs to two NCAA tournament appearances in 2009 and 2013 after 18 years without a tournament appearance. SDSU named the baseball stadium, as well as an annual tournament, after Gwynn after his death in 2014.

Fisher, referred to affectionately as “Fish,” coached SDSU’s basketball team from 1999 until 2017, raising the program from a laughingstock to the Mountain West’s premier program. Fisher led the Aztecs to the NCAA tournament eight times, including two appearances in the Sweet 16 in 2011 and 2014. In the 2010-11 season the Aztecs reached as high as No. 2 in the AP Poll and won 34 games. SDSU honored Fisher by naming the Viejas court “Steve Fisher Court,” and Viejas is often referred to as “The House that Fisher Built.” Fisher truly rose SDSU basketball from the dead. His longtime assistant, Brian Dutcher, is now at the program’s helm.

Leonard, now the two-time Defensive Player of the Year in the NBA and a Finals MVP, starred at SDSU from 2009 till 2011, helping lead the team to its first Sweet 16 berth. His no. 15 jersey is the most worn at basketball games, and his defensive dominance has helped stake SDSU’s claim as a defensive powerhouse.

Faulk ran rampant on opposing defenses in the red and black in the early 1990s, setting the school records for rushing yards in a season and in a career, and the NCAA record for yards in a game. That record fell in his second game as an Aztec, in which Faulk ran for 378 yards and seven touchdowns, both of which are still NCAA freshman records.

Faulk left SDSU after three seasons and one of the worst Heisman snubs in NCAA history in 1992.

Faulk’s SDSU records were intact until 2016, when Donnel Pumphrey etched his name in the FBS record books.

Pumphrey, the most recent Aztec prodigy, broke all said records during his legendary career, amassing an FBS record 6405 rushing yards over his four years in the red and black. He helped SDSU to two consecutive 11-win, MW Conference championship seasons, closing out the 2016 season as the No. 25 team in the AP Poll.