SoccerCity faces many challenges ahead of 2018 special election 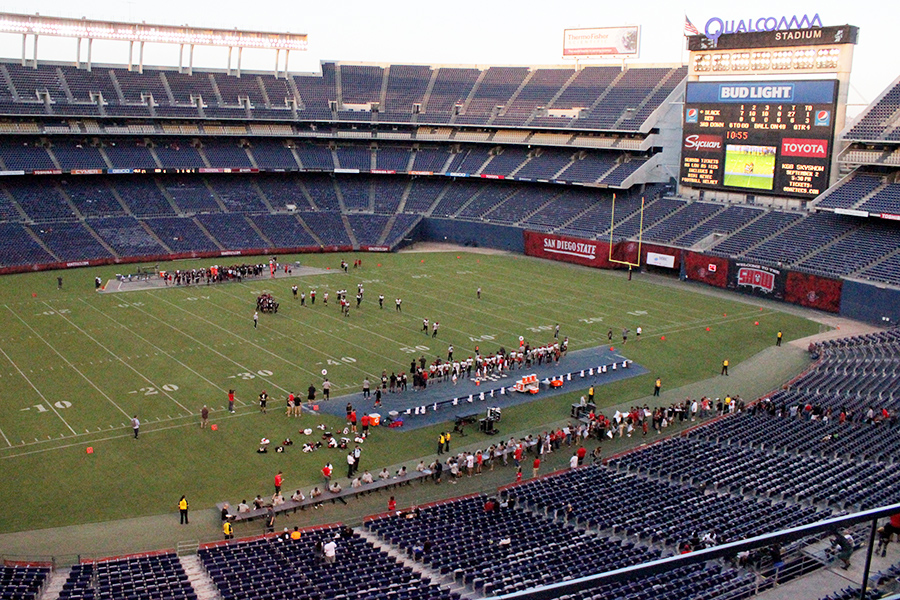 An aerial view of Qualcomm Stadium.

Three trolley stops away from campus, nestled in Mission Valley, is the sports icon of San Diego: Qualcomm Stadium.

For more than half a century, the Q has housed San Diego’s various athletic franchises, not the least of which is San Diego State University’s very own football team.

Following the departure of the Chargers in January, the future of Qualcomm Stadium has been thrown into uncertainty. Even with the hopes of higher attendance now that they are the sole football team in San Diego, SDSU does not have the financial bandwidth to keep up the stadium, leaving the city in dispute over what to do with the stadium and the complex on Qualcomm land.

In January, shortly after the Chargers’ official decision to leave San Diego, La-Jolla based group FS Investors introduced their plan for SoccerCity, a project to build a Major League Soccer stadium, a park, housing and additional developments on the Qualcomm site. SoccerCity was initially touted as a joint project with SDSU, who FS Investors were in talks with, that would allow the Aztecs to use the new facility as well. SDSU, however, has not endorsed the final version of the measure which is going to be voted on next year. In May, SDSU officially withdrew from talks regarding the project.

“For well over a year, San Diego State University has engaged in discussions with FS Investors on a possible partnership opportunity at the Mission Valley site,” said a statement released by the university in May. “Unfortunately, a fair, equitable deal that would provide opportunity for the long-term success of SDSU and Aztec football, as well as a transparent deal for the citizens of San Diego, could not be reached.”

SoccerCity proponents pressed for a special election to be held in November so a decision could be made about the new stadium in time to qualify San Diego for the MLS bid. Applications for the new MLS franchise were submitted in January 2017, with interviews with prospective teams taking place throughout the course of this year. The push for a special election for the SoccerCity measure was largely driven by the hopes of getting a green light on the new stadium while the window was still open with MLS.

San Diego has played host to a number of international soccer events, opening up Qualcomm Stadium to the myriad of local soccer fans. Most recently, it housed the CONCACAF Gold Cup in July with hundreds of thousands of tickets sold.

A special election does not ensure San Diego an MLS franchise.

The city council voted against holding a special election in June, insisting that San Diegans wait until November 2018 to decide what to do with the old stadium lands. The extra year will give other governmental organizations time to come up with countermeasures for the 2018 election, giving voters a wider choice of options.

Matt Awbrey, Mayor Kevin Faulconer’s deputy chief of staff and chief of communications has said that the city cannot afford to keep Qualcomm open past 2018, after which point, SDSU would have to find a new stadium. The Padres have offered to let the Aztecs play at Petco Park, but only for one year after the closing of the Q. This would leave the Aztecs effectively homeless by 2020 unless alternate plans are arranged.