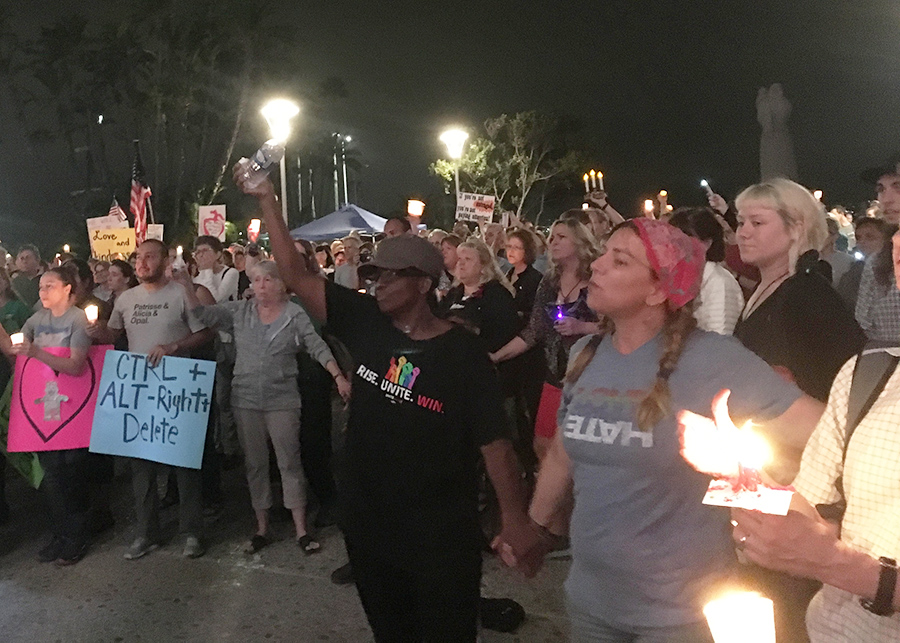 San Diegans at a vigil for Heather Heyer, the woman killed protesting the "Unite the Right" demonstrations in Virginia

The College Republicans’ statement was issued the same day as the terror attacks in Barcelona, Spain, which were attributed to individuals believed to be associated with the Islamic State.

“We ask the president of your organization to publicly condemn this morning’s acts of radical Islamic terrorism in Spain and those acts similar in nature,” the College Republicans’ statement read. “If this request is not made, we ask that the president of the Muslim Student Association and any remaining executive officers not in compliance resign immediately.”

The MSA did not immediately respond to the College Republicans’ letter, but thanked their supporters days later on Sunday, Aug. 20, for “numerous amounts of positive messages and comments regarding the distasteful letter that was sent to us.”

“Your kind words and willingness to stand up against injustice has showed our members and Muslim students from other universities around the country that we are not alone,” the MSA post – which never addressed the College Republicans – read. “Despite hundreds of attempts to stifle our voice and activism, the MSA continues to be a uniting force on campus.”

The MSA’s post also said the organization would like to express support for “victims of white supremacy, nationalism and terrorism.”

Representatives from the Muslim Student Association declined to formally be interviewed, but said in a Facebook message that the College Republicans’ letter was insensitive to the “current political climate of white supremacy and nationalism,” and an attempt to “distract and bait” the MSA at the beginning of a new semester.

“Muslims, people of color and other marginalized groups are already threatened on a national level, and acts such as this letter do nothing more than bring that threat to our college campuses,” the message read. “The MSA is committed, as always, to standing against hate, racism and oppression.”

“They thanked those in the community who support them and then went right back to playing the victim,” he said.

The College Republicans also received condemnation from SDSU Young Democratic Socialists of America, who called the letter to the MSA a “cruel and bigoted act.”

“By insinuating that MSA members will be considered terrorist sympathizers unless they condemn an attack they had nothing to do with, your organization is making Muslim students feel even more unsafe on their own campus,” the YDSA said in a statement posted to Twitter Aug. 18.

“Where was the College Republicans’ condemnation when Identity Evropa, a white nationalist hate group, plastered their propaganda posters and stickers all over campus?” the YDSA statement continued.

In the days since the College Republicans statement was issued, Jones said he received at least 10 threats via phone calls, Facebook messages or text messages.

One individual sent a text message to Jones referring to him as a “vile piece of an excuse as a human being (sic)” and told him to “watch your back every step you take.”

The individual would not go on the record with The Daily Aztec.

Jones defended his organization against accusations of racism, saying the College Republicans only intended to “level the playing field” in a university environment that he sees as antagonistic to conservative values.

“We’re just trying to create the same standard for everybody,” Jones said.

“Obviously, College Republicans – Republicans in general – are held to a different standard than other organizations,” he said. “I think that the political climate and the cultural climate in America, obviously on college campuses, leans to the left. I think that’s apparent to everybody.”

Jones said the College Republicans were not implying the MSA is responsible for the Barcelona attacks.

“We are simply looking for them to condemn what happened there, much like we condemned the events that took place in Charlottesville,” he said.

Jones also said, in light of the reaction to his organization’s statement, he intends to organize a round table discussion between various student organizations on campus to focus on how the community can “combat racism, hate (and) violence of all types, whether it be white supremacy or radical Islamic terrorism.”

“I think the best thing to do is to all get together, because we’re one big community, and we need to work on this together,” Jones said. “We’ll get the details together, and if they choose to show up, they’ll be more than welcome. If not, that’s also their choice.”