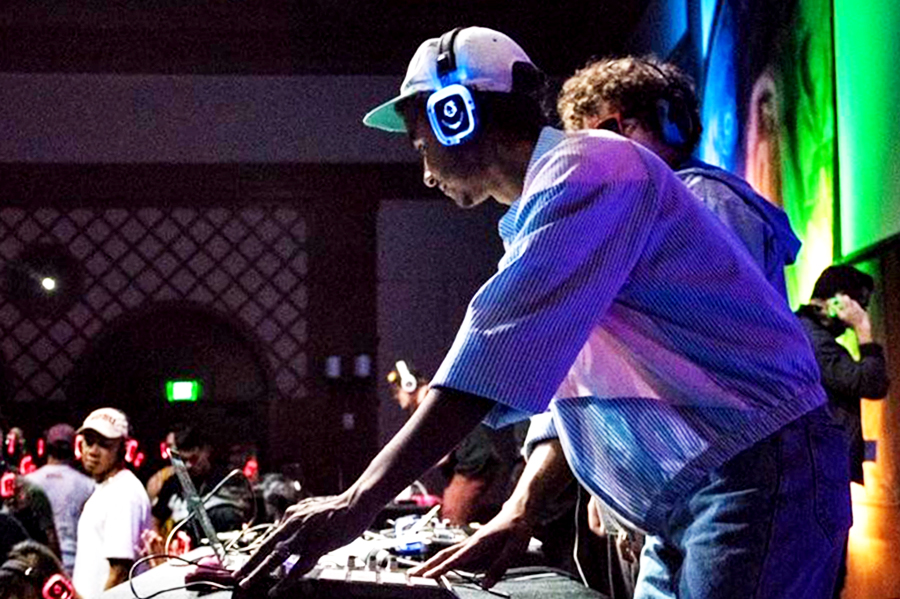 Hi-Fi performs one of his sets at a SDSU silent disco event winter 2016.

Recording technology and audio design senior Josh Jackson can often be found digging through dusty crates of vinyl records at thrift stores, later repurposing the cast aside relics into a musical vision that is decidedly new and original.

Jackson, known musically by the stage name Hi-Fi, prefers to call himself a composer, and describes his music as instrumental, electronic and DJ Shadow-influenced. And like that of the renowned “Endtroducing…” producer, Jackson’s music relies heavily on sampling—those samples not necessarily being music-based themselves.

“I’ll go to some run down thrift store and find, like, ‘Becky’s Fourth Birthday Party, Chuck E. Cheese’ on VHS and I’ll rip the audio off of that,” he said. “For me, it’s like the weirder I can find something, the better. It’s just so cool to me to take a part of this person’s life and be able to put it into this piece of art.”

He also broadens his horizons by purchasing CDs and cassettes from artists he hasn’t heard of, and listening to them to search for something sample-worthy.

Though using thrift store finds as muse is a common strategy when it comes to sampling, Jackson does not agree with the elitism among some producers that lead them to believe it is the only valid sampling method.

“There’s kind of this snobbery in sampling where you’re supposed to sample stuff that no one’s heard before,” Hi-Fi said. “There’s this whole culture behind crate-digging through records and searching for hours and hours and someone taking a more famous song is kind of like taking a shortcut. I get that view, but at the same time as long as they’re doing something new with the sample, I think that’s the biggest thing.”

The 23-year-old’s musical catalog is astoundingly expansive, dating all the way back to 2005. He is currently working on his 11th album, but still looks back on those early recordings.

“I don’t really regret any of the music that I’ve ever made,” Jackson said. “Some of it sounds

sh-tty but it’s fine, I don’t really care. When you listen to the early stuff as opposed to what I’m doing now, you can still hear that it’s a Hi-Fi song.”

His most recent album, “How Wonderful it Could Be!,” was released via Bandcamp last December. However, his latest project, a compilation entitled “Fever Dream” in which each track was dedicated to a different person Hi-Fi has collaborated with over his musical career, dropped in July.

Before coming to San Diego State, Jackson grew up in Sacramento, and said he more often looks inward at his experiences in both northern and southern California to inspire his compositions, rather than the musical landscape around him.

Yet the experience being used as inspiration doesn’t usually reveal itself to the musician until he’s finished the track he’s working on.

“Every once in a while I’ll be like, ‘Oh, I want to write a song like this,’ but a lot of the time I don’t know what I’m going to do,” Jackson said. “I just kind of put it in there and just let it go and see what happens. Usually after I’ve written the song, that’s when I’m kind of like, ‘Oh, I was writing about this thing in my life.’ After the song’s finished, that’s when I kind of figure out what the song was about.”

His wife and frequent collaborator, Mesa College junior Kit Jackson, said one of the most striking qualities of Hi-Fi’s music is the attention to detail.

“Watching him work, you get a chance to see how intricate it all is,” she said. “He could spend hours on a sample that maybe one-thirtieth of his listeners might hear, but it’s just as important as the main chord progression or vocal piece. I’ve listened to his music for years now, sometimes I still find samples that I didn’t even realize were there the first time through.”

As an artist herself, Kit Jackson often designs the cover art for Hi-Fi’s albums or provides other visual elements, which the musician finds vital to his craft.

“Besides listening to a song and how it makes you feel, the whole idea of looking at album artwork—I still love that,” the SDSU student said. “Whenever I perform live I always want to make sure that I have visual elements that coincide with the song in order to convey the message a little bit more.”

Jackson described one live performance in which his wife accompanied him onstage, painting while he performed two songs and revealing the finished piece to the audience once the set was finished.

Short term, Hi-Fi hopes to perform live around San Diego more frequently and continue to grow a fan base online, but Kit Jackson sees immense success for the musician in the long term.

“I think that he’s already really come into his own with his music,” she said. “If he keeps going at the pace that he’s going, someone with influence in the industry will find him and he could very well be the guy who brings back French house.”

Josh Jackson’s music can be found on Bandcamp, Apple Music, Spotify and Tidal, and he is aiming for an October release for his next album.