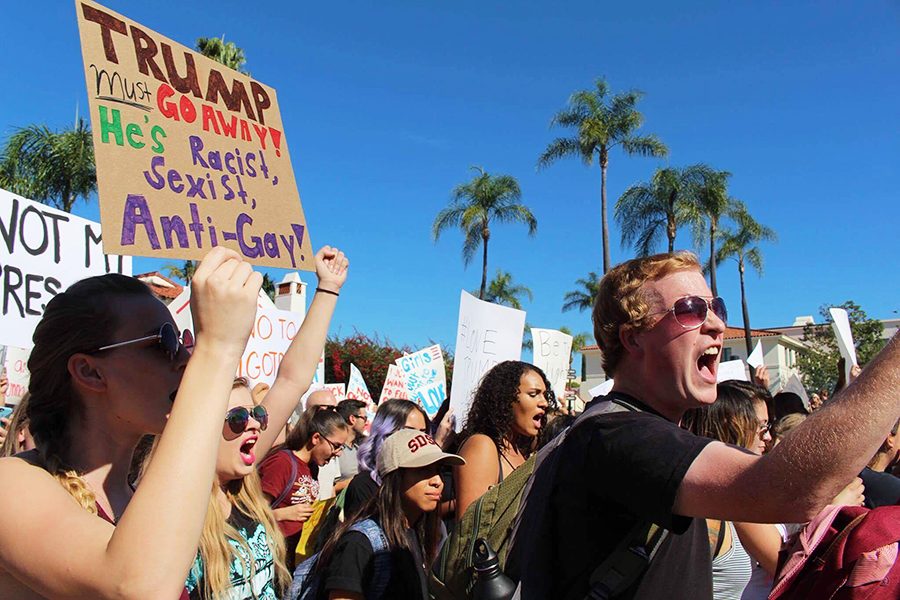 Students rallied on campus after the election of Donald Trump in November, 2016.

It was just a short, simple gripe on social media.

“As a Republican in college, I am genuinely afraid to speak about my conservative views in fear of being stereotyped or labeled negatively.”

Michelle Shampton, a sophomore at Ball State University in Muncie, Indiana, said that in a tweet on March 17. It took a few days, but after a handful of retweets and replies, the tweet began to snowball. Within a week, it had been retweeted more than 1,000 times and garnered almost 4,000 replies — most of which were negative.

Shampton described the scrutiny as “harrowing.”

“It was kind of like a life-changing experience for me,” she said. “The amount of criticism I was receiving really got to me and started making me upset. There were a couple days when I would just sit there and cry reading the responses. I started getting a lot of death threats.”

Many of the responses to her tweet talk about the fear of violence many people in minority communities experience on a day-to-day basis. Overall, it is difficult not to say that the tone and tenor of the responses didn’t work to confirm the sentiment of her original tweet.

“People hear the word ‘Republican’ and they start assuming what my beliefs are,” she said. “(I) don’t abide by every single belief that the party does.”

The narrative that colleges and universities are politically liberal institutions is supported by the numbers. A study published by Econ Journal Watch in 2016 found that in a sample of 7,200 professors, roughly 3,600 were registered Democrats, while 314 were registered Republican — a ratio of 12 to 1.

Brandon Jones is the incoming chair of the San Diego State College Republicans. He said that he believes conservative viewpoints are often shut down by university professors.

“The number of times that my hand has been called on after my first initial comment during a semester I could probably count on one hand,” he said. “You just don’t get called on if you’re not speaking to what the professor and the other students want to hear.”

Jones described an incident with one such professor — whom he would not name.

“After three years at SDSU I went up to one of the professors in the political science department and said ‘I’m not getting called on. You’re not letting me speak this class,’” he said. “She looked me right in the eye and said, ‘you asked for this on day one when you wore your Make America Great Again hat to class.’ She shut me down because of something I wore.”

Jones said he feels the hostility to conservative ideas comes from the top down — directly from the administration. He said this is especially apparent because of what he saw as the university’s tepid response to an associate dean and a professor who, in two separate incidents, made statements on social media that were seen as derogatory towards Republicans.

“The views and opinions expressed by faculty and staff on their personal accounts are protected by the First Amendment and do not necessarily reflect the views or positions of the university,” SDSU then-spokesperson Gina Jacobs said in a statement after Patrick McCarthy, an associate dean of library and information access, referred to the Republican party as an “extremist terrorist organization” in a Facebook post.

“It’s clear that kind of treatment is tolerated,” Jones said of the university’s statement. “I feel like, you know, they don’t support us, and yes, he has his right to free speech, but that doesn’t mean by any means that we’re not going to hold him accountable for it.”

Shampton said she had similar experiences at Ball State.

“Most of the time I don’t really speak (about politics) because I know my grades are going to be affected,” she said. “I tend to not really share with my professors’ points of view.”

Jordan Dennison was the chair of the SDSU College Republicans during the 2016-2017 academic year. He had a different take on the campus political climate.

“It’s not a big issue for me,” he said. “Of course, you will see at SDSU conservatives and republicans b—-ing and moaning and complaining that they feel ostracized or that they can’t be outspoken or their teachers are going to downgrade them. I’ve never really had that problem.”

Dennison also said he thought that focusing on campus climate was a distraction.

“I think it delegitimizes the Republican cause and who Republicans are,” he said. “It makes them into — and I hate this term — snowflakes. They’re playing the victim.”

There have been physical incidents at colleges recently where leftist demonstrators became physically violent.

Conservatives framed the issues at Berkeley as a free speech issue, while the upstart Antifa, or anti-fascist movement, frames them as a fight against what they call “facism.”

Columnist Neil Lawrence, writing for The Daily Californian, Berkeley’s student newspaper, defended antifa tactics in a column and said they had also received death threats after publishing an open letter to Yiannopoulos.

“These were not acts of violence,” Lawrence wrote in the column, “They were acts of self-defense.”

Then, after the SDSU College Republicans issued a statement Aug. 17 asking the university Muslim Student Association to denounce the recent terror attacks in Barcelona, Spain ­— something Jones said he did not feel was unreasonable given his organization’s condemnation of the actions by white supremacists in Charlottesville, Virginia, where a counter-protester was killed — Jones said he began receiving threatening messages and phone calls.

One individual, who would not go on the record with The Daily Aztec, sent Jones a series of text messages telling him to “watch ur back every step u take,” and warning him that SDSU’s campus would be “the war zone against u inhuman rats.”

However, Jones said he wanted to separate what he called “left-wing indoctrination” from the threats he has received, because he feels SDSU authorities are taking the threats seriously. He said he received a phone call from SDSUPD Cpl. Mark Peterson and SDSU Dean of Students Randy Timm checking in on him and ensuring campus safety resources are available to him.

“In my personal experience, I think that they’ve done a great job on the security aspect,” Jones said. “But then when we start talking about ideas and open discourse, that’s where it gets a little different.”

Apart from these instances, reports of threats or violence against conservatives is more difficult to confirm. One video posted on the blog “The Narrative Times” gained national attention among right-wing media outlets. The video shows conservative students being physically accosted by a liberal student.

Other claims do not hold up.

A viral story about a Rollins College student being suspended for disagreeing with a Muslim professor was shown to be untrue by fact-checking website Snopes. The story that had circulated was only from the student’s point-of-view.

The College Fix, a conservative news site critical of liberal academia reported the story and it took off from there. But upon further scrutiny by Snopes, it was found that the student had been threatening the professor.

Student Emily Schaller told the newspaper someone threatened to beat her up.

This story was also widely disseminated by The College Fix, a media outlet whose funding has come under scrutiny.

Inside Higher Education reported in February that the organization’s financial backers included a fund that received significant contributions from Secretary of Education Betsy DeVos and that her son, Rick DeVos, sat on its board of directors.

Despite the stories of hostile academia, Dennison remained skeptical, saying it was also a fundraising tactic college organizations play up to elicit donations.

“You can play this card and people will donate to your cause because they pity you,” he said.

“Instead of talking about that, we could talk about policy — things that actually matter,” he said.

Jones also said the perception of college conservatives was off.

“I think that when somebody thinks of a conservative, they think of a straight, white male,” he said. “And really, in the College Republican organization, there’s people of all walks of life.”

Jones said he knew where the stereotype came from.

“I think the biggest reason for that misconception is the media,” he said.

And he’s not alone in this type of thinking.

A survey by the Pew Research Center found trust of media down with millennials. In 2010, about 40 percent said the national media had a positive effect on society. By 2016, when the survey results were released, that number had dropped to 27 percent.

Conservative students interviewed mostly agreed that the perception more liberal students have of them is inaccurate, but that conversations were not allowed to happen. And while frequent demonstrations and marches in support of liberal causes do take place at SDSU, it is scarce to see that level of outspoken activism amongst conservatives.

“I think the biggest problem with conservative activism is it’s very hard to be active on a liberal campus,” Jones said. “Other groups on are allowed to thrive. I don’t think conservative groups get that respect.”

Jones said he plans on doing more to increase the conservative profile on campus during the 2017-2018 academic year, including inviting potentially controversial figures on campus to speak.

“I will be inviting conservative speakers like (those that led to protests) to SDSU,” he said. “I hope we don’t see the same thing that’s happening at Berkeley and other college campuses. It’s just not acceptable.”

Jones said it was as simply a first amendment issue.

“It’s very clear in the first amendment,” he said. Students that don’t agree with that speaker have the right to protest, but they do not have the right to make sure that individual is not even allowed to come speak. An act of violence that takes away someone’s free speech is the very thing they (should be) standing up against.”

Shampton was diplomatic after her harrowing social media ordeal.

“I think what’s important to take away from this is that if people stop believing the stigma and stereotypes people give each other, we’d realize that we’re a lot more alike than we think,” she said. “We can understand and take the time to listen to each other and discuss each other’s views before we attack.”