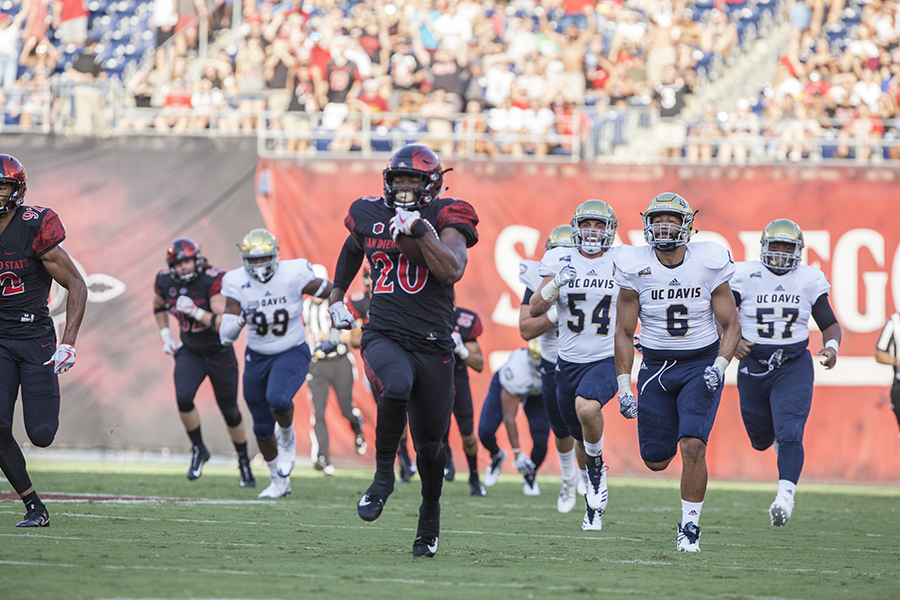 The Aztecs, which were littered with underclassmen and first-time starters, opened the game with a 38-3 run before the Aggies closed the gap late.

Here are some notable news and trends from the contest.

It’s getting hot in here

The game-time temperature clocked in at 95 degrees, the second-hottest recorded temperature for an SDSU home game, behind its contest vs North Dakota State on Sept. 15, 2012, which came in at 97 degrees.

As of Friday, Sept. 1, SDSU’s home stadium was no longer Qualcomm Stadium, as the naming rights for the long-standing stadium expired at the end of August.

Any reference to Qualcomm was erased from the stadium, leaving only the word “Stadium” on top of the West end zone video board and “Welcome to (blank) Stadium” at the entrance to the parking lot.

The deadline to submit naming rights was September 1, and according to the San Diego Union Tribune, Qualcomm did not apply to renew.

Many Aztec fans on Twitter had suggestions, ranging from bringing back Jack Murphy Stadium to giving it another San Diego-themed name such as Aztec Warrior Stadium or Gwynn-Seau field.

Tony Gwynn and Junior Seau are two San Diego sports legends who passed away, Gwynn in 2014 and Seau in 2011.

Despite missing senior starting tight end David Wells, who is still out with a jones fracture, the unit showed up in the 2017 season opener.

The first went to sophomore Kahale Warring, who led SDSU with five catches for 73 yards and one score. Warring had two catches – both for touchdowns – in his freshman season.

The second score went to senior Darryl Richardson, who recorded the second catch – and first touchdown – of his career.

In all, three tight ends racked up seven catches for 118 yards and two TDs.

The Aztecs rushed for 245 yards on 43 carries, marking the 43rd time that they have gained over 200 yards since head coach Rocky Long took over in 2011.

Senior running back Rashaad Penny nearly broke that barrier himself, rushing for 197 yards on 21 carries, a healthy mark of 9.4 yards per carry.

23 Aztecs recorded a tackle in the win, with the high mark of four tackles shared by six different players. The team total was 52 tackles.

Only one SDSU player took down the quarterback, that being junior linebacker Ronley Lakalaka, who notched one sack.

The defense struggled to record any tackles late in the game, allowing to UC Davis touchdowns in the fourth quarter.

But, by that time, the second-team defense was in.