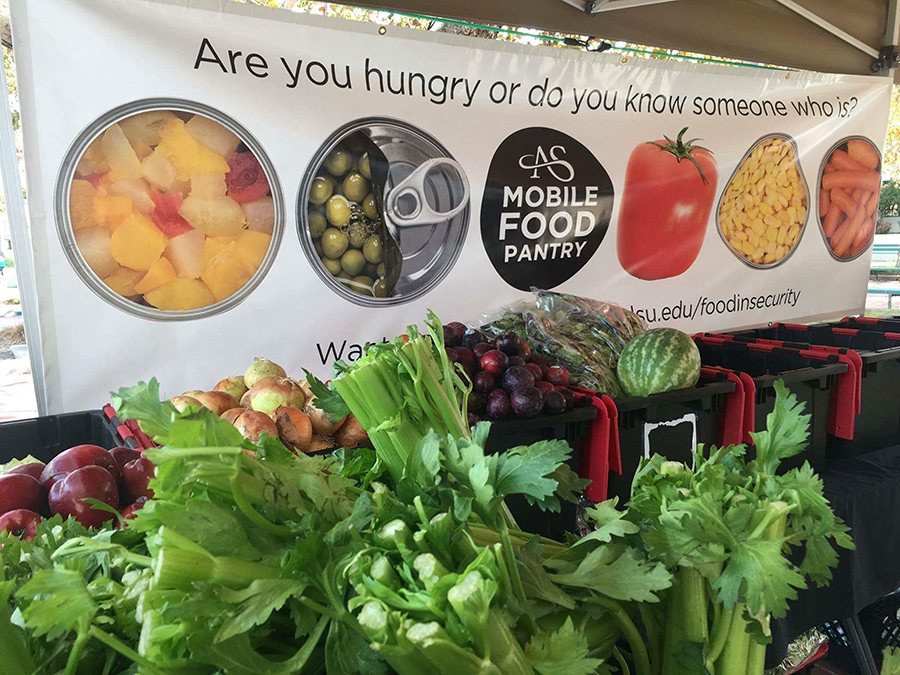 The AS Food Pantry sets up every Thursday during the farmer's market on the north library walkway.

One of the new aspects directly affecting students is the expansion of the AS Food Pantry, the campus’ first real push at fighting food insecurity.

Last spring, a resolution was proposed within AS to expand the food pantry and its components. The bill was passed in spring 2017 and was implemented in fall 2017.

Originally implemented in fall 2016, the food pantry was only available on Thursdays at the farmers market prior to the resolution.

The food comes from The Jacobs and Cushman San Diego Food Bank and is delivered to the student union.

Communications junior Joey Lucero is the AS Student Support Commissioner and said his branch of AS is directly involved with the food pantry’s implementation and goals.

According to Lucero, the AS Food Pantry has distributed 38,321 pounds of food to 2,842 SDSU students from fall 2016 to the end of spring 2017. There are a total of 150 trained SDSU student volunteers who served more than 300 hours in volunteer work during that time period.

Lucero said that this year the pantry will also be giving students needed toiletries. He said this is something many food pantry recipients pushed for.

Another part of the expansion includes an educational component that includes resources to other AS food insecurity programs and encourages students to look into CalFresh, a federally mandated, state-supervised and county-operated government program that provides monthly food benefits to low-income households.

Students can directly apply to receive food from CalFresh as well as schedule to meet with an application advisor on the AS website.

This year, AS Food Pantry is partnering with health educators from Health Promotion to help make the application process easier and less intimidating for students.

Food Pantry volunteers and AS supervisors are also present to provide information about nutritional services, how to get in contact with the Economic Crisis Response Team and AS No Waste.

AS No Waste is a sustainability initiative designed to reduce food waste in the student union and provides food to SDSU students facing food insecurity. The initiative has a Twitter account students can follow to receive notifications and additional information.

“If we have an event in the student union or an event on campus where there’s catering and there is food that was untouched or leftover, we will tweet out on that Twitter account and tell people to come pick up food at this location,” Lucero said. “It’s great food because it’s catering.”

Marketing junior Sam Emami is the Marketing and Communication Commissioner for AS. He facilitates all marketing efforts for AS programs and campaigns.

Emami said he is really proud and excited for the expansion of the food pantry to provide more opportunity for students to come out and take advantage of it.

“I believe having such a thing on a college campus is huge because the concept of food insecurity is very prevalent across many college campuses,” he said. “(These) programs allow students to feel comfortable and be able to stress less about their food situation and have a consistent source of groceries if need be.”

Lucero said there is no application process. When students go to the food pantry, volunteers swipe their Red IDs to verify they go to SDSU as well as count the number of students utilizing the food pantry.

“At that point, there are no other questions, no qualifications or applications,” Lucero said. “Students literally get their reusable shopping bag we provide them with and they can go ahead and shop at the Food Pantry.”

AS is hoping that the expansion of the Food Pantry will ease the financial burden that some students feel so that they can focus on their purpose at college.

“We don’t think a food pantry can solve food insecurity by itself, so what we’re doing is really ensuring that we’re providing students with other resources that are available to them at the food pantry when they come to pick up food,” Lucero said.