Call to arms: SDSU needs ‘The Show’ to come out in full force for Stanford 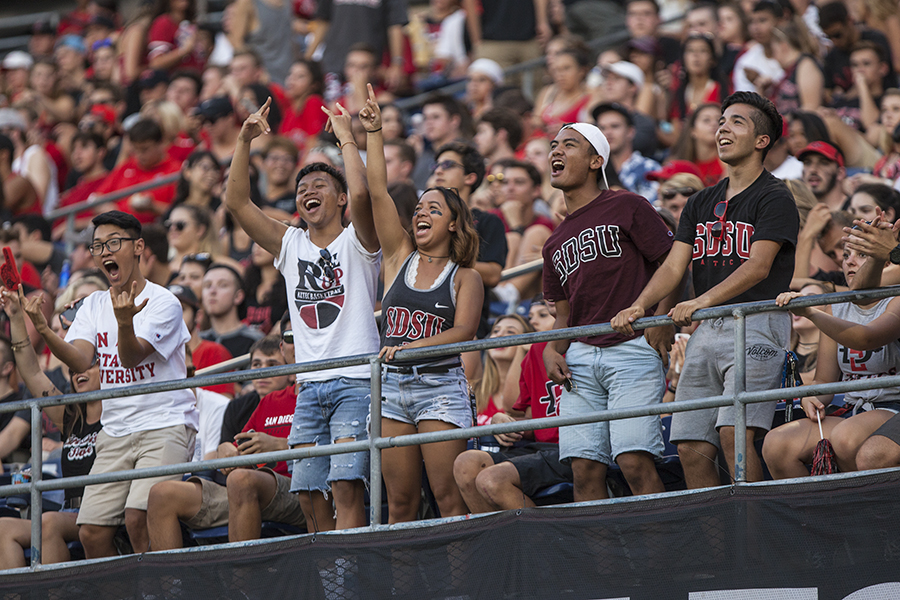 New tailgating regulations require groups of 25 or more to register three days before the game.

For a little over 20 years, San Diego State football was virtually nonexistent in the scope of San Diego sports.

Playing in old Qualcomm Stadium, the Aztecs were more of a relic of successes past, a reminder of the exciting team that once was than an enjoyable Saturday night event.

Years of ineptitude clouded the shining lights of Marshall Faulk and Don Coryell, pushing SDSU out of the limelight.

But things have changed.

One thing that has not changed, however, is attendance.

Despite the dramatic improvements of the team, fans have not come out to see the new product.

Following in the footsteps of Brady Hoke, Head coach Rocky Long has led the Aztecs to the top of the Mountain West Conference, winning two consecutive MWC championships. And after sitting out of the postseason for 11 years, SDSU has played in a bowl game in seven straight years, winning the last two in convincing fashion.

It is a new era of Aztecs’ football, one of sustained success and competitive play, one for breaking records and setting new standards for future teams to follow.

And SDSU’s matchup with No. 19 Stanford this weekend is indicative of everything that the program has accomplished the last few years.

So this Saturday, there is no other place that SDSU fans, students and alumni should be than San Diego Stadium.

In years past, this game would be decided long before the coin toss. Stanford would come to San Diego and decimate the Aztecs, stealing their spear and slaughtering them for sport.

But times have changed. Fans just have to follow suit.

With an average of just over 37,000 fans per game in 2016, San Diego Stadium was rarely close to filling out

Only one time in recent memory has the crowd every played a factor – SDSU’s 2015 MWC championship game win over Air Force Academy, and even then the attendance was less than 21,000. The fans that did come out, however, impacted the game, helping shift the momentum of the contentious game.

Against a team like Stanford — a power-five conference team with three Rose Bowl appearances in the last five years — the Aztecs need all the home field advantage they can get.

Remember the glory days of The Show? Remember the difference that a crowd full of energetic, loud, raucous fans made?

What launched SDSU basketball into the stratosphere was it’s dominanace at home, and a major reason it was hard to beat at home was because of the fans.

There are many things to come out to the game for.

Come out to see senior running back Rashaad Penny continue to demoralize defenses, and even force his way into the Heisman Trophy conversation, just as Donnel Pumphrey did in SDSU’s 45-40 win over University of California, Berkeley in 2016.

Come to see Stanford, possibly the most physically imposing and talented team that has SDSU has ever hosted.

Imagine this: Fans come out in full force, and the Aztecs upset Stanford.

Running off the energy of the biggest win in program history and the outpouring of fan support, SDSU rolls through the rest of its non-conference schedule, and continues its MW dominance.

Then, after their third straight MWC championsip, the undefeated Aztecs, behind Heisman Trophy finalist Rashaad Penny, are selected for a New Year’s Six Bowl, cementing their place in the national spotlight. And it all began when fans came out for the biggest game in SDSU history.

See you on Saturday.