Chapman holds the keys to SDSU’s success against Stanford 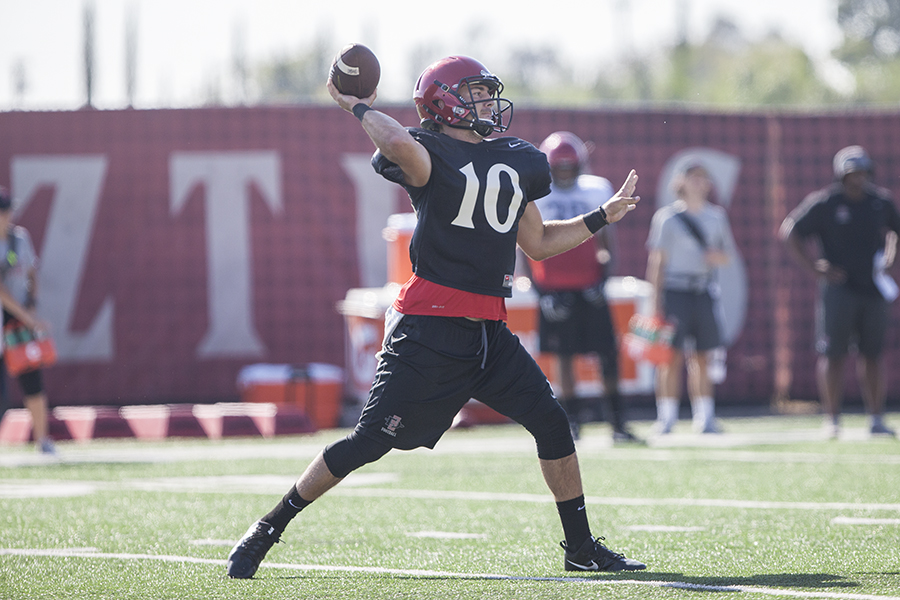 Saturday night is going to make or break San Diego State football’s season. In one of the biggest games to date, Pac- 12-powerhouse Stanford University travels south to play the Scarlet and Black.

SDSU enters the game boasting the Walter Camp National FBS Player Of The Week in senior running back Rashaad Penny, who single-handedly dismantled Arizona State on the road last week resulting in a 30-20 victory. SDSU has one of the best run games in the country, and subsequently depends on their ground game, and Stanford knows this.

“Some of it is by design, but as always players win and players lose,” Head coach Rocky Long said. “Coaches can lose a game for you by not giving the players a proper chance to play well, by giving them a lousy scheme compared to who they are playing against.”

In their win over ASU, the Aztecs’ passing game was nonexistent. If you disregard the 30-yard passing touchdown to Penny that the star running back turned from a dump off into a highlight play, junior quarterback Christian Chapman’s night was forgettable, compiling 73 yards with a 50 percent completion rate.

Stanford’s defensive gameplan will be simple Saturday night: Shut down the run game.

Chapman will have to step up and command his squad to a win against a nationally ranked team with one of the best secondaries in college football.

If Chapman puts up the same passing performance as he did against ASU, this game won’t even be close.

The potential for the passing game to ignite is there, with new 6-foot-5 and 6-foot-4 starting receivers in Isaiah Macklin and Tim Wilson Jr., Chapman has red zone targets to complement his speedy slot receivers, seniors Quest Truxton and Mikah Holder.

Stanford is going to force offensive coordinator Jeff Horton’s hand in regards to his passing offense, which mostly consists of short and safe routes and an under center “I” formation.

SDSU will need long throws and shots to the end zone to get defenders out of the box, which will give Penny room to work with.

Without a threatening passing game, Stanford will put seven or eight defenders at the line of scrimmage to stuff the run and stall SDSU’s offense, destroying its chances of winning.

Defensively, SDSU has proven time and again over the years that it can hang with the Cardinal offense.

If the Aztecs can play with minimal mistakes on defense, they have enough speed and size to play against a power five school. That proved that last Saturday as they contained ASU’s offense for most of the game.

Saturday is everything for SDSU football. With a win it could reach heights that haven’t been explored since 1977 when it finished the season ranked No. 16 in the AP polls.

The team is on the verge of glory.

All it has to do is close the deal.