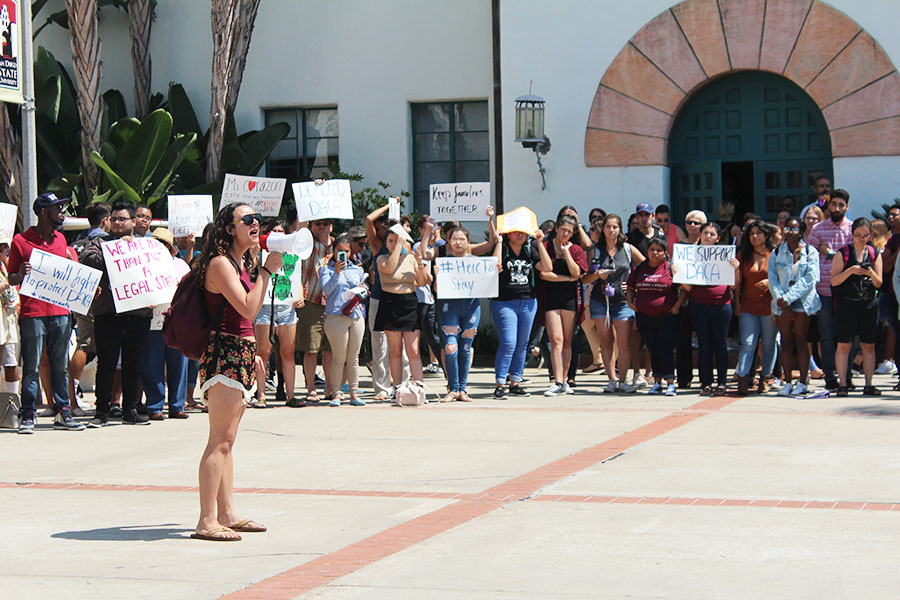 President Donald Trump affirmed his support for a law to permanently protect DACA recipients, contradicting an earlier denial of reaching an agreement with democratic leaders.

“No deal was made last night on DACA,” the president said in a tweet after 6 a.m. Washington time. “Massive border security would have to be agreed to in exchange for consent. Would be subject to vote.”

House and Senate minority leaders Nancy Pelosi and Chuck Schumer said in a joint statement that all parties “agreed to enshrine the protections of DACA into law quickly, and to work out a package of border security, excluding the wall, that’s acceptable to both sides.”

Since first being enacted under then-President Barack Obama in 2012, DACA has provided protection from deportation to young undocumented immigrants  — under certain requirements —  who were brought to the United States illegally as children, as well as allowed them to receive work permits and, in some states in California, get driver’s licenses.

Attorney General Jeff Sessions had previously announced on Sept. 5 that DACA would be rescinded within a six-month window.

CSU Chancellor Timothy White also sent out an email expressing his disappointment with Trump’s prior decision to end DACA and assuring students that tuition and financial aid would not be affected.

After Wednesday’s announcement, there was some disagreement between officials on specifics.

“While DACA and border security were both discussed, excluding the wall was certainly not agreed to,” Sarah Huckabee Sanders, White House press secretary, said in a tweet.

Matt House, communications director to Schumer, tweeted in response: “The President made clear he would continue pushing the wall, just not as part of this agreement.”

The agreement to protect young undocumented people will still need Republican votes in order to make any change on immigration policies.

Since taking office, Trump has signed executive orders to construct a wall on the U.S.-Mexico border and announced his support for the RAISE Act, an immigration law that will favor undocumented immigrants applying for a green card based on their educational levels and skills.

“I hope to see the same cooperation on issues such as healthcare and tax reform,” Jones said.

Marlene Martinez, a member of SDSU MEChA, said she thinks this agreement was the result of uproars and disapproval across the country after it was announced DACA would be rescinded.

“I hope this agreement can go beyond assisting undocumented students to protecting all undocumented immigrants, as well as seek more resources for refugees,” Martinez said.