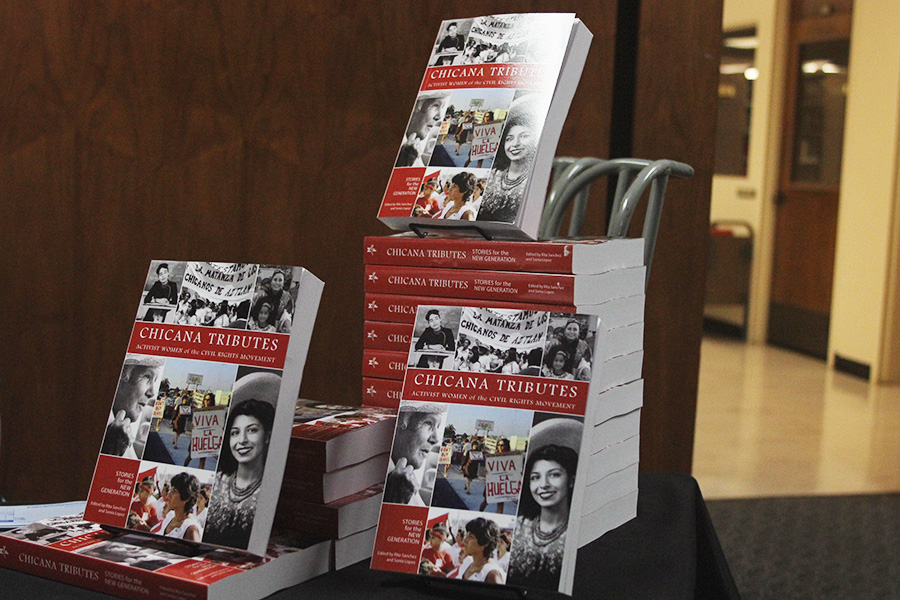 New anthology “Chicana Tributes: Stories for the New Generation,” is displayed outside of an organized panel discussion in Love Library.

Students, children, staff, faculty, community members and activists of all ages gathered on the fourth floor of Love Library to attend the San Diego State event “Chicana Tributes: Stories for the New Generation.”

The attendees packed the room, standing against the walls and outside the doorway to listen to the panel of speakers.

The event was meant to introduce the newly published anthology to the university community and discuss its topics and purpose.

The event featured a panel of women including editors Rita Sanchez and Sonia Lopez, director of the SDSU Chicana and Chicano Studies Department Maria Ibarra, and some contributors to the anthology including Maria Nieto Senour, Enriqueta Chavez, Irene Lara and Maria Figueroa.

It specifically highlights Chicanas in the San Diego community through 61 different stories of activists involved in arts, music, public office, education and much more.

Many of the women profiled have made their way through SDSU in some shape or form.

MacFarland’s song was followed by Zerina “Poezia” Zarmeño reciting two of her poems, “The Thread” and “Viva.”

One of the panelists, Irene Lara, is the associate professor of the Department of Women’s Studies and has been teaching at SDSU for 15 years.

Lara identifies herself as a curandera scholar activist. She spoke about the emergence of intersectional and decolonial approaches to the movement in the 1990s, an ideology she adopted as a college student.

Lara was followed in the panel by Maria Figueroa, a professor of English at MiraCosta Community College who also teaches written communication in the Chicana and Chicano Studies Department at SDSU. Figueroa taught one of the first Chicana studies courses at San Diego City College.

Figueroa emphasized the importance of honoring the ancestors that came before and have paved the way for activists now.

“This anthology is a healing tool. It bridges our pains, our wounds, our accomplishments and struggles between generations,” Figueroa said. “This book is the seed and the students and children and future generations that read this are the fruits of this seed.”

Maria Nieto Senour provided a comic relief to the deep topics discussed. Senour chairs the San Diego Community College Board of Trustees and is a retired SDSU faculty member.

Senour said much of her activism is connected to SDSU, in contention with the administration. Senour had various issues she tried to tackle while she was a faculty member.

One of those issues was to change promotions and tenure track for faculty. She said that women and faculty of color did most of the mentoring and felt that should be included when considered for promotions or tenure.

Another issue she criticized was the change to the local student guarantee in September 2009.

She said cutting off how many students could be admitted is discriminatory to certain students.

“They actually have a limit on how many Mexicans can come in, only they don’t say Mexicans—they say local students,” Senour said.

“The only thing that’s getting a little better is it’s becoming harder to deny that racism exists,” Senour said. “It’s becoming harder for people to say ‘no those things don’t happen.’ In some ways it’s a hopeful time because you can’t begin to cure cancer until you know you’ve got it, and so we’re beginning to see more clearly the cancer that has always been of the U.S., the cancer of racism that has been a part of the founding of this country and has never stopped.”

The panelists received praise and applause throughout the event from the crowd of attendees.

Dr. Maria Zuniga thanked the panelists, contributors and women profiled for validating her experience as a minority faculty at SDSU from 1985 to 2003 and fighting an institution that was not sensitive to adversity.

Toward the end of the event, a community member asked how this anthology would be made available to high schools, universities and school districts.

The editors said they have started to donate books to various organizations and centers, but encouraged those who were able to purchase one book to also purchase an additional book and donate it to a cause they care about.

The anthology is being sold at the SDSU Bookstore and online through various retail sellers, and will be available through the library at a later date.