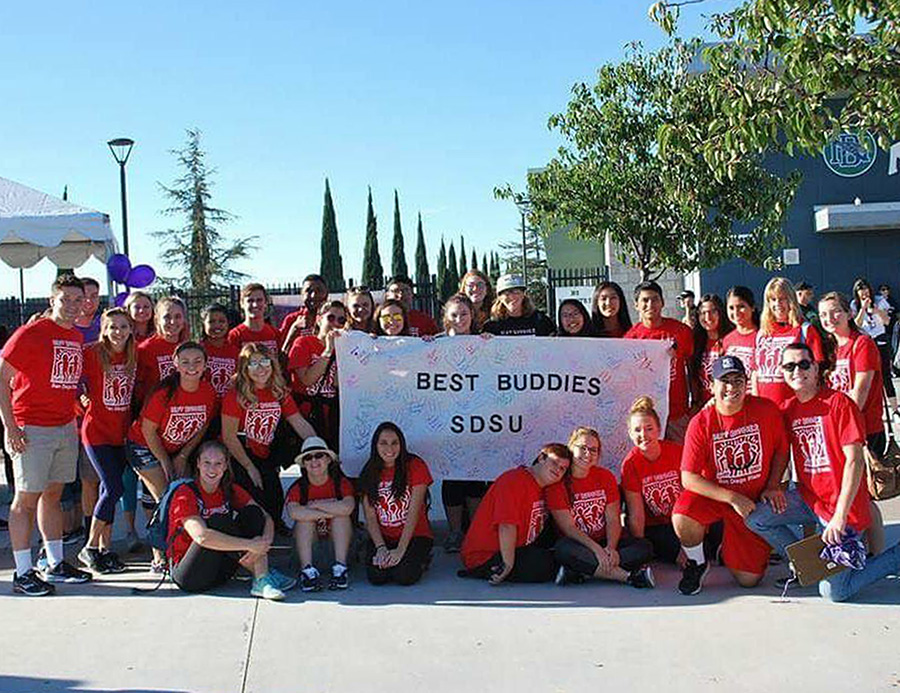 San Diego State’s chapter of Best Buddies is focused on spreading inclusion and ending the stigma for people with disabilities.

Best Buddies is an international nonprofit organization that seeks to establish leadership development, friendships and job opportunities for people with intellectual and developmental disabilities.

The SDSU Best Buddies chapter pairs student members, known as “peer buddies,” with adults from around San Diego County, with the intent to integrate them with students on SDSU’s campus.

It is led by club president Julia Moluf, a sophomore double majoring in psychology and speech, language and hearing sciences.

“At SDSU, our focus is really making sure that adults with disabilities in the San Diego community (are) able to participate in the collegiate experience,” Moluf said.

Peer buddies are paired with individuals after going through an interview and application process. They establish a one-on-one friendship with their buddies and are required to not only go to mandatory meetings every Wednesday, but also meet with their buddy outside of meetings twice a month.

“It’s just a really awesome way to make friends and for people with (intellectual and developmental) disabilities to be involved and included,” Best Buddies secretary and liberal studies junior, Ella Holton-McCoy, said.

Best Buddies hopes to break down barriers those with intellectual and developmental disabilities must endure in their day-to-day lives, and hopefully enhance the opportunities available to them.

The organization is working on establishing a greater presence at SDSU and spreading their message of acceptance and inclusivity.

Holton hopes Best Buddies can make a difference and change SDSU students perspectives on those with intellectual and developmental disabilities.

“As a club, we are going to make an effort to help get inclusion (on campus) and (get) people with disabilities recognized and comfortable around campus,” Holton said.

Both Moluf, who has been paired with her buddy Haylie Ausen since her freshman year of high school, and Holton, have found Best Buddies to be an enriching learning experience.

Kinesiology senior and executive member Kyle Swain has also had a similar experience.

“I’ve learned (to have) compassion, empathy and patience from each and every one of (the buddies),” Swain said.

Swain said he has been in a buddy program since he was in middle school and is pleased with the progress and growth the club has undergone in the past couple of years at SDSU.

Johnny Espinoza, Swain’s buddy for the past year, has also found being in Best Buddies to be a valuable and enriching experience.

“I hope we can make an impact,” Espinoza said. “It’s something really powerful that can change lives.”