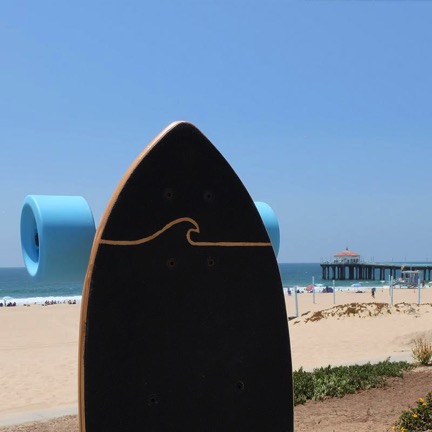 Riptide electric skateboards can be used anywhere from Pacific Beach to the SDSU campus.

Electric skateboards available in today’s market are created by businessmen who have probably never laid foot on one.

This was a problem for television, film and media senior Eric Birkemeier.

Birkemeier, an avid skater since the age of five, has participated in many sporting clubs on campus like the lacrosse, ski and snowboard teams.

He had the idea to create his own line of electric skateboards eight months ago. Through his participation in the SDSU ZIP Launchpad, he joined Shredlights, a skateboard headlight company. He ultimately stepped up as a cofounder.

Birkemeier also used the resources and skills he gained from completing the Lavin Entrepreneurship program to create a startup company and strategically push his product into the market with minimal background in business.

He was able to utilize the skills and connections he gained while running Shredlights to make his own company, Riptide, come to life.

Three main components Birkemeier prioritized in his design for Riptide were price, portability and power.

Birkemeier made his skateboard portable with its handles and airplane-friendly, sleek design.

The board is powerful and caters to skateboarders with experience because the company prides itself in being made by skaters for skaters.

The name of the company is inspired by how surfers view riptides in the ocean.

“(Riptides are) dangerous to the unfamiliar, but not to the surfers.” Birkemeier said.

Birkemeier said it can be scary to join the world of startups for the first time. He said failure is inevitable, but it is necessary to ensure a perfect final product for consumers. He emphasized the importance of doing, testing and failing.

“Failing is a part of the process,” Birkemeier said.

When the time came to design the Riptide board, Birkemeier spoke with various manufacturers of Shredlights and personally rode their samples to determine who created the best model.

He also utilized Shredlights’ clientele to obtain insight on early designs of his skateboards.

“With Eric’s entrepreneurial drive, it was inevitable that he would expand beyond just doing headlights for skateboards and now Riptide is his new project,” Alex DeNoble, executive director of the Lavin Entrepreneurship program, said. “Clearly it is an outgrowth of his earlier efforts with Shredlights, especially since the two product lines are so complimentary.”

To students in pursuit of being an entrepreneur, Birkemeier would advise not to wait around for a new million-dollar idea to come to mind.

Instead, refine one idea that has already been thought of. It can be as simple as joining someone’s team and learning from them to build the skills necessary to implement an original idea that comes in the future.

The company recently reached its goal of raising $50,000 through an Indiegogo fundraising campaign. Riptide is currently accepting preorders on its website, and the skateboards are estimated to be released in January 2018.