Women’s soccer loses to UNLV on own goal 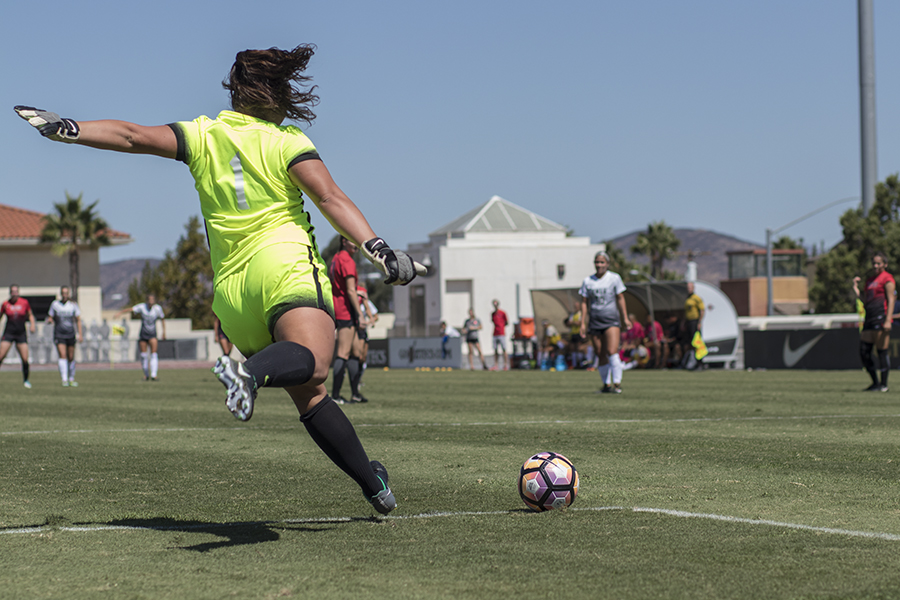 A sunny San Diego afternoon turned dreary for San Diego State women’s soccer, as it fell to the University of Nevada, Las Vegas 1-0 at home in its second Mountain West Conference game of the season on Sunday afternoon.

The loss dropped the Aztecs to 4-6 overall on the season, and 1-1 in MW play.

The Aztecs’ defense contained the Rebels for most of the afternoon, as UNLV’s only score came on an own-goal on a SDSU miscue.

The Aztecs’ offense, meanwhile, created many scoring opportunities, but were unable to capitalize. The first of those opportunities came in the 37th minute, when junior midfielder Nikolina Musto sent a strike near the bottom corner of the net that was snatched by UNLV senior goalkeeper Jordan Sallee.

The Scarlet and Black produced another chance to capture a goal just before halftime, when the SDSU defense created a UNLV turnover.

The Aztecs moved the ball downfield rapidly, and connected with freshman forward Mia Root on a pass. Root sent her shot toward the right post of the goal, but narrowly missed on what would have been her fifth goal of the season.

Both teams went into halftime scoreless.

About seven minutes into the second half an SDSU blunder led to the only goal of the game. While trying to get a free kick in the box out of harm’s way, the Aztecs gifted the Rebels the lead.

After getting the lead, UNLV started to press for an insurance goal. The result was SDSU sophomore goalkeeper Gabby English making diving and leaping saves, keeping the Aztecs in striking distance.

But it was all for naught, as the Aztecs were unable to close the gap.

Head coach Mike Friesen said the missed opportunities offensively for the Aztecs and the miscue that led to the only goal of the game cost the team the game.

“We’re pretty disappointed to drop that game on an own goal”, Friesen said. “It’s unfortunate to hit the post twice and create tons of opportunities, and not have anything to show for it. A couple times we got in behind and tried to ride out a challenge in the box and couldn’t quite get to it.”

English made a career-high six saves in the loss.

The Aztecs return to the playing field on Friday Sept. 29, when they travel to Logan, Utah to take on Utah State University.