Young Americans for Liberty promote free speech with a ball 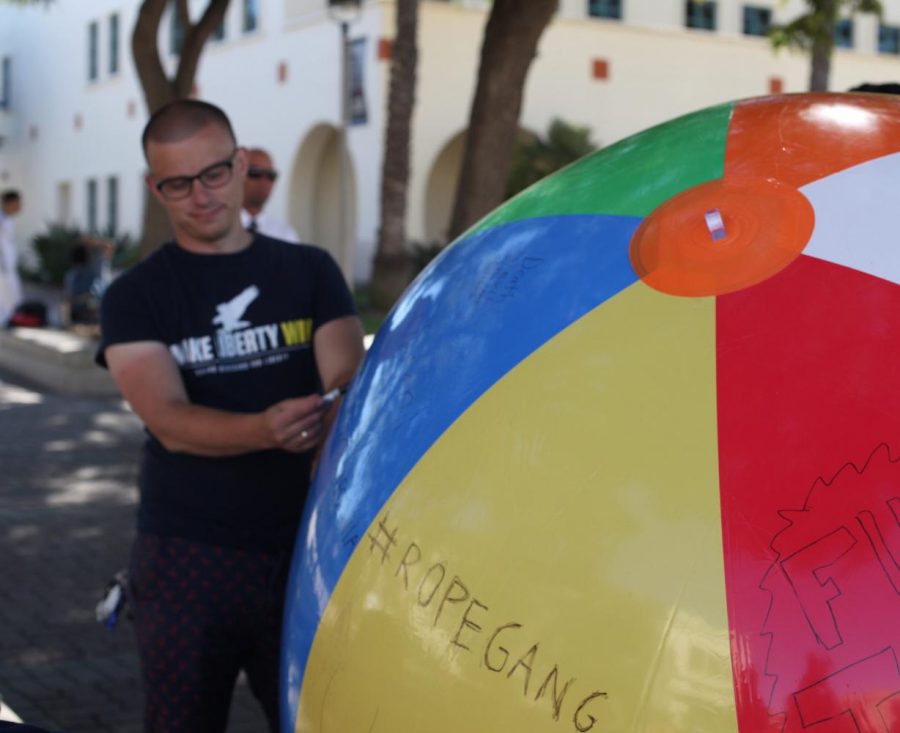 Young Americans for Liberty offered students the opportunity Friday to write whatever they wanted on a giant beach ball in an exercise to encourage free speech on campus.

The “free speech ball” event was held between 10 a.m. and noon in front of the SDSU Bookstore.

The point of the event was to give people a chance to share their ideas without trepidation, said business senior Terry Kim, president of the San Diego State chapter of Young Americans for Liberty.

“Regardless of political affiliation, I want people to be able to talk to each other,” Kim said.

People with different political views should be able to have a civil discussion and talk without insulting each other, he said.

“As long as we talk about it and agree to disagree,” Kim said.

The organization also held the event on Sept. 29, and he said more than 500 people signed the ball.

“I found out through events like these that free speech makes people smile,” he said. “When I told them ‘you can write anything you want,’ they get this evil look something or they go, ‘Oh I don’t know if that’s a good idea.’”

Kim said with a large student body, it can be difficult for conservatives to express themselves and be involved in an organization.

“My friend works for SDSU, he can’t do anything with us,” Kim said. “That is the main reason he gave up the presidency to me. We have 20 active members right now. We have 30,000 students and 20 conservatives.”

“It’s helpful,” he said. “It makes sure people understand your side or whatever your opinion is.”

Another student, mechanical engineering sophomore Kaylin Sabado, said writing on the ball helps her express her ideas and relax.

“I think (free speech) is really important,” she said. “But at the same time it can go a little too far sometimes with people discriminating or saying derogatory claims.”

“We identify, educate, train and mobilize students who want to make a difference,” he said. “A difference in terms of free speech, individual rights, non-partisan libertarian ideas that resonate with a lot of millennials.”

Fatal said that there are a lot of events happening locally and nationally that need to be expressed and talked about freely.

“This is an opportunity for people to say whatever they want without judgement, without reprisal, without consequence,” he said.

Another reason to promote free speech is to educate those who use their right to attack others, he said.

“Free speech allows us to challenge, individually and as groups and as a community, hate speech,” Fatal said. “With logic, with reason, with emotion… it allows us to show that it doesn’t have a place in our society.”

People who abuse their free speech will do it regardless of anyone trying to stop them, he said.

“They’re going to do their salutes and their chants and their shouts and say hurtful things to people,” he said. “But without free speech for everyone else who is law-abiding, and respectful we’re not going to have a way to ostracize hate speech from our culture.”