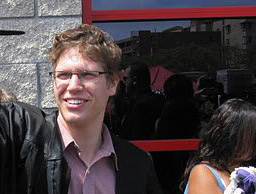 One San Diego State alumnus has launched a startup to help people support corporations that share their values.

SDSU philosophy graduate Jonathan Hecht is the creator of Impakt, a browser extension that, through the use of algorithms, flags products in online shopping carts and informs consumers whether the company they are buying from uses business practices considered unethical.

Hecht, who also studied law at the University of Southern California and received a doctorate in philosophy from Indiana University, said his company gives consumers personalized alerts, company profiles and alternative recommendations on e-commerce sites.

“It’s about making a real difference,” Hecht said. “All sorts of labor issues are at the core (of Impakt’s focus).”

Child labor, lack of diversity in the workplace, lobbying, location of production and hazardous environmental practices are some of the things he said he hopes to expose to consumers.

Hecht said it was his and others’ disillusionment with the 2016 election of President Trump that inspired his startup idea, as he struggled to find a way to make a difference. He also said Impakt is non-partisan, but generally progressive.

Hecht said Impakt has been met with an incredible amount of support. A Kickstarter for the company made $10,000 within the first 24 hours of its launch — over a third of its goal of $29,950.

Sustainability junior Erica Larson said she agrees with the company’s values, and believes that it is a consumer’s right to know where a product came from.

On the opposite end of the spectrum, some students don’t find the practices of a corporation and its political alignment to be of utmost importance when purchasing a product.

“I wouldn’t necessarily care to look at that,” said biology sophomore Gabriella Salcedo. “I’m still going to buy what I want from whichever company.”

Hecht said he hopes that by making companies transparent and giving consumers the option to not be complicit with a company’s practices, he can make a positive change today’s political climate.

“I think that this was Obama’s point,” Hecht said. “The way forward is to find our individual ways to make a difference.”