Sunsets and sweet tunes score big in Symphony by the Sea 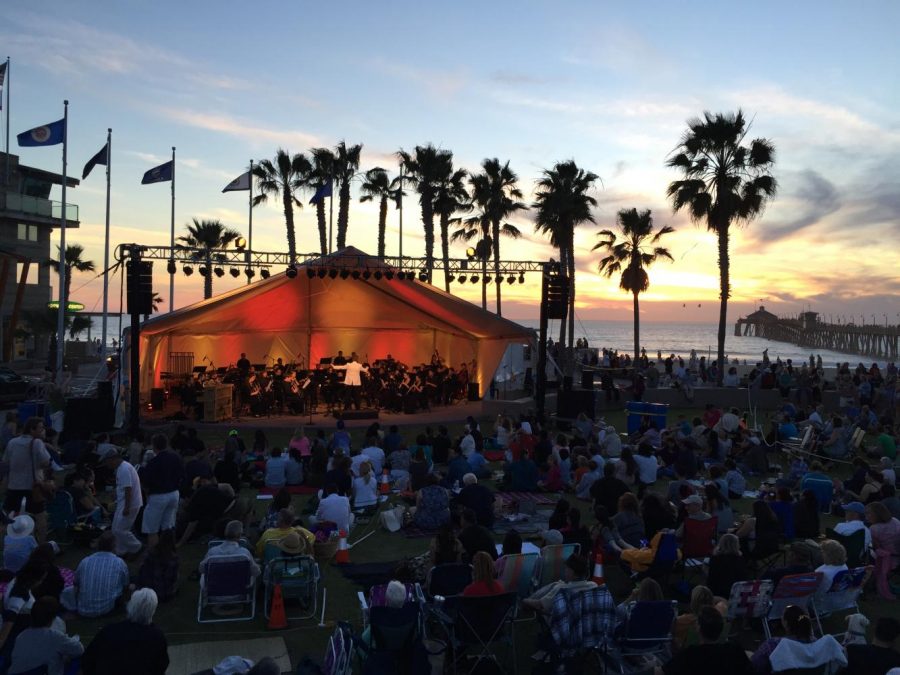 San Diego State’s Symphony Orchestra and Wind Symphony performed during sunset in Imperial Beach at the annual Symphony by the Sea on Saturday, Oct. 7.

The third annual Symphony by the Sea was conducted during a scenic sunset hour at Imperial Beach on Saturday, Oct. 7.

This free concert, sponsored by the San Diego Unified Port District and the City of Imperial Beach, was open to the public and featured San Diego State’s Wind Symphony and Symphony Orchestra.

Crowds were easily drawn in by the beautiful musical pieces all while being able to watch the sunset. On average, Symphony by the Sea gathers around 2,000 audience members each year.

“This performance really brings music to the masses,” Symphony Orchestra conductor Shannon Kitelinger said. “We get such a diverse audience that might not normally hear symphony pieces.”

Imperial Beach Mayor Serge Dedina opened the performance with a few words, raving about his love for this event each year.

The Wind Symphony took the stage first, followed by the Symphony Orchestra.

The Wind Symphony opened its performance with the national anthem as the diverse array of concertgoers stood attentively. When the song concluded, the crowd enthusiastically praised them.

The Wind Symphony was conducted by Michael Gerdes and all of this year’s pieces were written by American composers.

Gerdes said the pieces performed were classic American hits from the Golden Age of Hollywood.

“We are closing with a Star Wars suite and it has been so much fun,” Gerdes said.

Kitelinger said every year the symphony performs patriotic pieces, but this year was a bit different.

“This year we added a fun, new element of planetary space,” Kitelinger said. “We also have an exciting piece, Phantom of Empire.”

This year was music freshman Sarah Pierce’s first time performing in Symphony by the Sea.

“I love the planetary pieces we are doing, the brass sounds have such power,” Pierce said. “I also love that we are able to share our music with those who aren’t usually exposed.”

Both Gerdes and Kitelinger agreed that the scenic coastal venue could not be beat.

“The city has invested in us by building us this amazing stage,” Kitelinger said. “We couldn’t be more thankful.”

Kitelinger said that before the performance started, he posted a picture of the venue on his Facebook page and all of his conducting colleagues from across the nation were jealous of his scenic playground.

“Not every college has the opportunity to play on the beach, so we are so lucky to be here,” he said.

The students performing in the concert also agreed the Imperial Beach venue and planetary themed sets were the highlights of the entire event.

“I love the planetary pieces we are doing in the concert,” music junior and Symphony Orchestra musician, Joey Ortiz, said. “They are so intense and require a whole other level of commitment and musicianship.”

Music junior Kennan Langsford of the Wind Symphony said his favorite part of the performance was seeing all of the different audience members enjoy the concert.

The conductors, performers and crowds in attendance of Symphony by the Sea enjoyed the coastal melodies in a way only San Diego can do best.