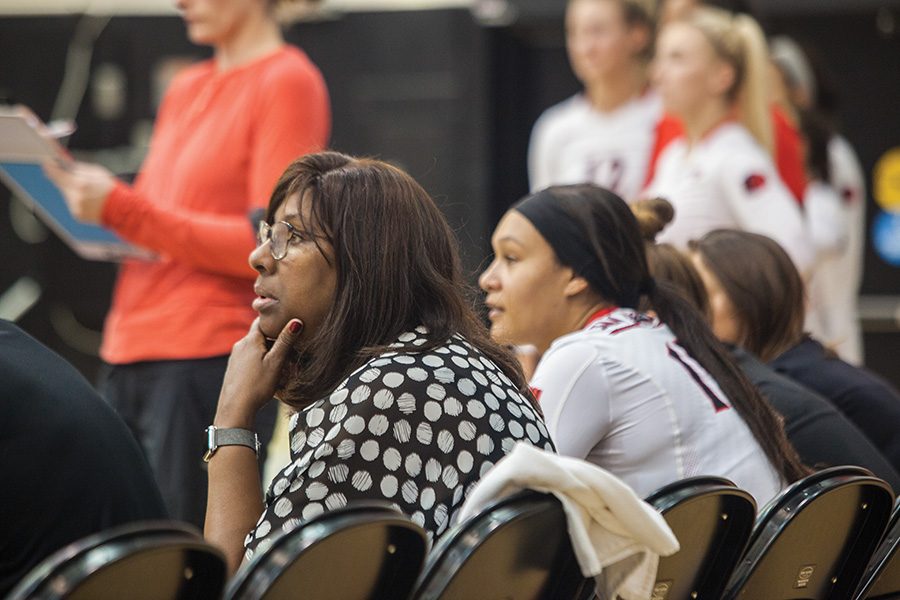 When San Diego State volleyball head coach Deitre Collins-Parker was told she had just earned her 300th career victory, all she could do is laugh.

Another milestone victory came in 2012, when the Aztecs earned the program’s first ever Mountain West title, under Collins-Parker’s guidance.

Collins-Parker had a prolific playing career, earning some of the most prestigious accolades offered in the NCAA and moving on to play professionally.

In 1983 and 1984 Collins-Parker was named national collegiate player of the year out of the University of Hawaii, and is a part of the American Volleyball Coaches Association Hall of Fame.

She was the recipient of the Broderick Cup in 1984, an award given to the nation’s best collegiate athlete across all sports.

“I never really thought about coaching, I didn’t realize it could be a career,” Collins-Parker said.

However, when the opportunity presented itself, Collins-Parker decided to give it a shot.

“I was playing internationally and would come back and coach camps during the summer at the University of Houston,” Collins-Parker said. “Their coach said if I ever wanted to coach he would give me a job, and so when I went out in the real world and realized it wasn’t very fulfilling I decided to try it.”

Her first head coaching experience came when she was hired at the University of Nevada, Las Vegas in 1996, where she stayed until 2004, when she began a five-year head coaching stay at Cornell University.

Lauren Salisbury played under Collins-Parker in the 2009 and 2010 seasons, and experienced the transition between her and former SDSU head coach Mark Warner.

“There was a lot of change going on, but it was very smooth with her and a very quick buy in,” Salisbury said. “Her vision was clear for what she wanted to do at SDSU.”

Salisbury said that the impact Collins-Parker left on her was invaluable on and off the court.

“She is somebody who really cares about her student athletes, not only in volleyball, but in life,” Salisbury said. “It’s nice to have a coach that understands the things we go through, the challenges on and off the court, and makes us successful people and athletes.”

SDSU junior middle blocker Deja Harris began her career as an Aztec with relatively little volleyball experience, and credited Collins-Parker for her role in her development.

“Coming into college I was a very young volleyball athlete. I came in just trusting her coaching and 100 percent I have evolved and am continuing to evolve because of her,” Harris said. “Every single day she comes in and encourages me, but also makes me work my butt off in practice.”

Collins-Parker’s time on the Mesa has proven to be successful, however there’s one thing she would want to change.