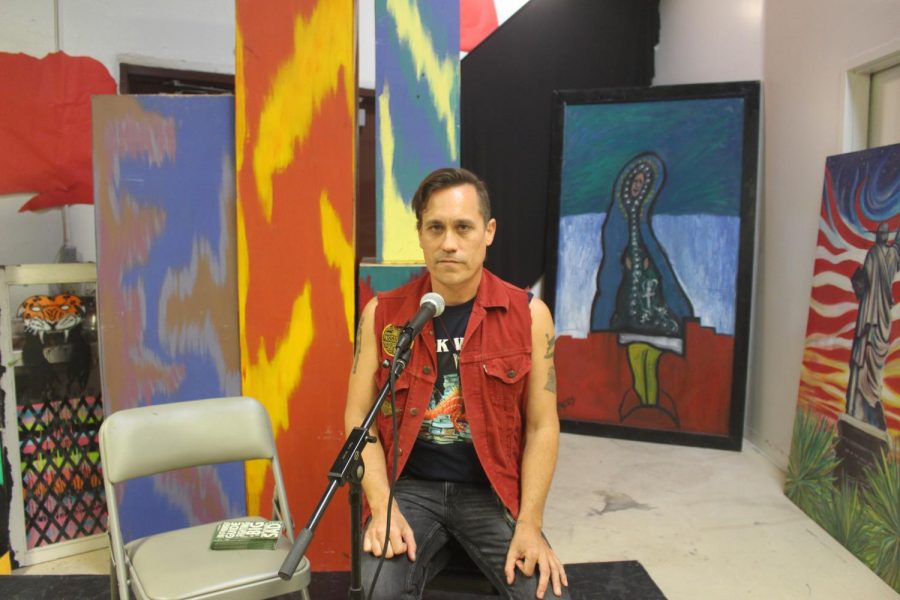 Inside the San Diego Zine Fest was a small, bright room with colorful paintings, a stage, a microphone, rows of chairs and a stack of books. One by one, people filled the room waiting for the arrival of writer, musician and the colorful ex-San Diego native, Adam Gnade.

Gnade left San Diego in 2005 after serving as editor of the alt-weekly Fahrenheit San Diego. He currently lives and writes on a farm in rural Kansas.

However in “The Do-It-Yourself Guide to Fighting the Big Motherf–ckin’ Sad,” Gnade used a different writing approach with the hope of igniting something else within his readers.

“I had things I felt like I needed the world to know. It was a really painful process and I didn’t enjoy it, but I did it,” Gnade said. “I’ve actually got to the point where I’m comfortable in (writing) and for me it’s a place where I can go and let all of the horribleness of the world go away for awhile.”

Writing his book was not an easy process for Gnade. He wanted his words to convey truth, motivate and be concise all at once.

With a topic like depression, Gnade took his readers into consideration and did not want his book to drag on.

During the event, he read a few passages from his book.

“Sometimes life flattens you like a f–cking beer can,” Gnade read from his book.

“Some days can be a goddamn bear but some are good and right and sweet. So, hello, my name is Adam Gnade and here are some pep talks I’ve given myself lately. I hope you get something good from them.”

The ending of Gnade’s introduction summoned a clapping audience and set the tone for the rest of his book reading.

“It was actually pretty spiritual,” marketing sophomore Elizabeth Popova said. “The ambience in the room was quite overwhelmingly poetic and romantic.”

In his book, Gnade not only presents tactics in overcoming feelings of sadness, but he also offers advice applicable to anyone regardless of where they are in life.

Gnade said he acknowledges the dread in life, but believes it is the good in people that keeps him going.

He emphasized the importance of individual purpose, true friendship and raw honesty.

“What I hope people get is that they find something they can just give their heart to and believe in,” Gnade said. “You carry (these ideas) with you like the fire that keeps you alive.”

During the question and answer portion of Gnade’s book reading, it was clear the book achieved his goal.

The audience expressed their gratitude toward the author and gave accounts as to how Gnade’s book helped them “fight the sad.”

“He was able to find a silver lining, I think that’s what resonated with me the most,” undeclared SDSU sophomore Katelyn Bittner said. “He was able to overcome this huge obstacle and then turn it around in a way to help other people.”

Outside of the room where the reading was held, copies of Gnade’s book were on sale for seven dollars each.

The following day after Zine Fest, Gnade displayed his musical talents at the San Diego Zine Fest after party where he performed a few of his “talking songs.”