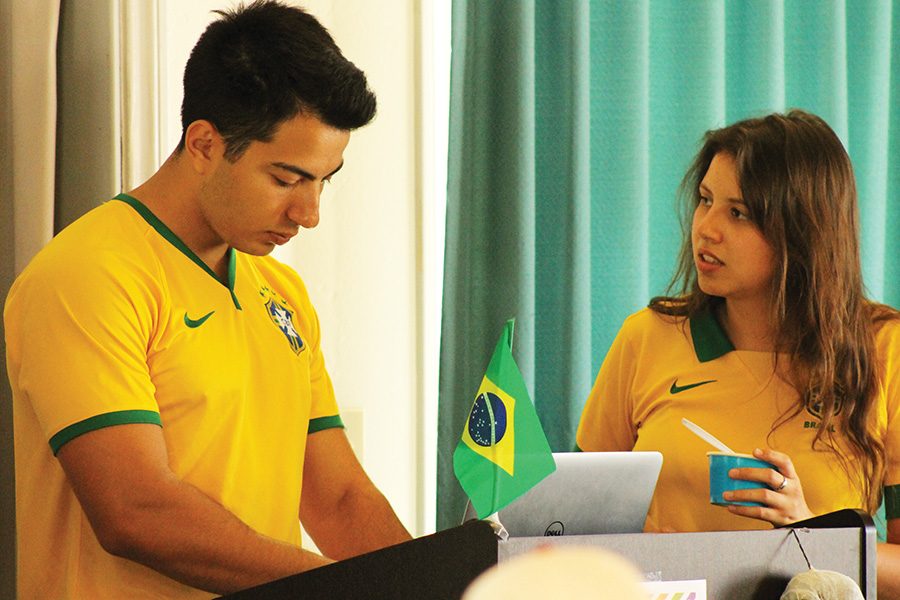 International students are able to share their experiences from their home country and teach other students about their culture at the International Student Center’s Coffee Hour held every Friday.

On Oct. 13, students from the Brazilian Student Association spoke at the coffee hour about their culture. People in attendance were offered a traditional bowl of acai.

Economics senior Marina Aragao is a member of the Brazilian Student Association and spoke.

She first came to the U.S. to play collegiate volleyball at California State University East Bay, but transferred to SDSU after fracturing her back.

She grew up near the beach in Rio de Janeiro and said SDSU was the best fit for her.

“It’s similar to Rio, the people are more chill and laid back about stuff,” Arago said. “California is not the same as New York or any other state.”

During the coffee hour, many common misconceptions about Brazil were discussed.

For example, it is not a Spanish speaking country, their capital is not Rio de Janeiro and the country is a lot larger than usually given credit for.

International business junior Matheus Peronti Kolberg noticed the differences between colleges in the U.S. and Brazil.

“We don’t have GE’s in Brazil, you don’t have any classes that aren’t related to your major,” Kolberg said. “You can’t switch majors—you have to quit college and reapply.”

Kolberg is currently studying with a student visa and is hoping to be sponsored by an employer to obtain a work visa.

However, he said that if he does not receive a work visa, he would be happy to go back to Brazil.

He was an exchange student in Indiana during high school.

“My expectations were like ‘High School Musical’ and it was not like that,” Valente said. “By the time I was applying for colleges I decided I wanted to go somewhere warmer with a culture that is more similar to mine.”

Finding the Brazilian community in San Diego has helped both Aragao and Valente find their home away from home.

“I’m much more spontaneous when I’m around Brazilians because they understand my way of talking or understanding jokes, and when I’m with Americans it is a little bit harder to do that,”  Valente said.

Although there are some differences, events like ISC’s International Coffee Hour help students to express their culture and teach people about their way of life.

“It’s empowering to see how many Brazilian students are at SDSU and give them a voice, that’s what we want to get out of (coffee hour),” Arago said. “We want to empower our community.”

Having an event like International Coffee Hour helps to bridge the gap between American and international students.

“Every week we have a different country hosting and I see a lot of not just international students, but also local students,” psychology senior Karyna Yoong said. “You get to share your culture and have a better understanding of each other.”

International Coffee Hour isn’t just aimed at informing American students about other cultures, but rather informing people from all places.

“I’m from Malaysia and every time I come to the coffee hour events I learn something new,” Yoong said. “It’s not just beneficial to American students but international students as well.”