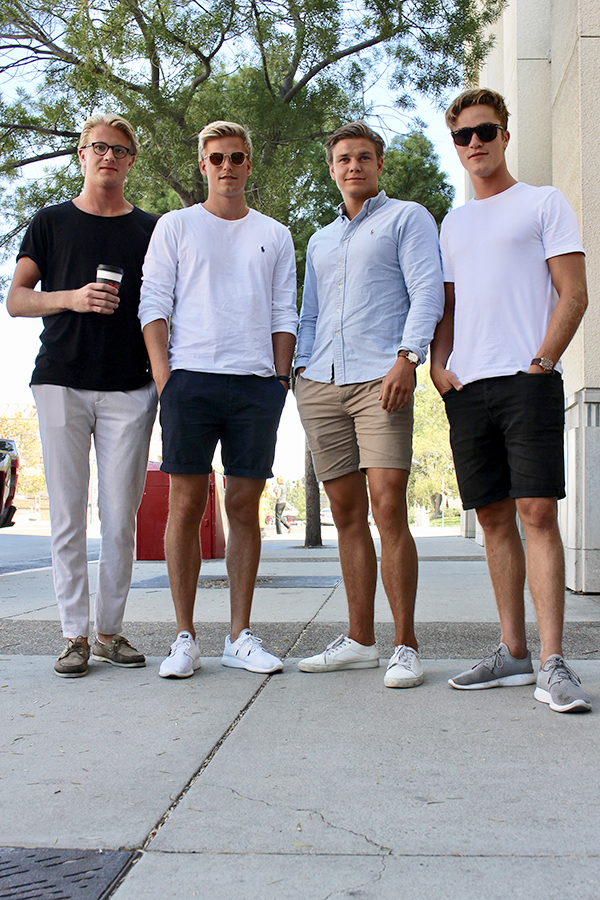 At a campus heavily dominated by leggings and flip flips, the original taste in style from San Diego State’s international students provides a breath of fresh air.

Their assorted languages fill the halls with color, accompanied by possibly the most notable difference—their style.

Business majors Sebastian Carlsen, Anders Bloch-Sørensen, Frederik Blicher and Christian Olin sauntered down the street, towering above the crowd of students in their seemingly-coordinated get-ups. The Danish transfers donned similar hues—strictly white, black, light blue and tan—and made it apparent that they never strayed too far from this color scheme.

“We don’t mix a lot of colors,” Carlsen said. “You don’t see that very much with Americans.”

His friends chuckled heartily at the notion.

“Most (Danish) people like black, white and grey,” Bloch-Sørensen said. “I guess what we’re wearing would be a very Nordic style.”

What inspires your style?

Blicher- A walk through Copenhagen. We get inspired by looking at the different styles people wear in Copenhagen.

Bloch-Sørensen: Yeah, the minimalistic Scandinavian style for sure.

What are your favorite brands?

Blicher- Tiger of Sweden—I don’t think you have it here. It’s very Nordic and very slim.

Carlsen- We wear a lot of slim clothes, generally.

Bloch-Sørensen- I would say it’s mostly about finding a specific style you like from a particular brand, say a pair of pants, that fits you. Then you know that if you need a new pair of black jeans, you can walk into Tiger of Sweden and they’ll fit great.

Carlsen- I agree, I’m not that loyal to brands. I can’t pick a single one.

Blicher- I buy a lot of stuff at Aces. They have a lot of clothes, some are cheap, some are expensive, but for me, it’s never just one brand, it’s a mix.

What do you focus on when picking out new clothing items?
Bloch-Sørensen- When we were younger we focused on the brand more, but now if something fits you and you like it, you’re set. You can buy an expensive pair of jeans that fits you well and then throw on a plain black or white tee shirt from H&M— it fits well, it’s casual and it costs $10. I feel comfortable in a plain white tee shirt for sure. It’s mostly about the fit.

Olin- With shoes though, Danish people care a lot about wearing very expensive designer shoes, like Valentino or something big. I’d say with shoes, design over comfortability is the popular thing in Denmark. You have to hurt a bit for it.

What are you looking forward to wearing in the fall season?

Bloch-Sørensen- We love wearing jackets! We definitely like the clothes you can wear when it’s colder, you can mix it up more.

Olin- Back home, everyone wears long coats to the knee, over a shirt, a sweater, some jeans and chelsea boots. Leather and suede jackets are very popular.

What are the main differences you’ve found between Danish and American fashion?

Carlsen- Here (in San Diego), you just wear a shirt and shorts.

Bloch-Sørensen- We don’t go out in shorts. At all! Never! We put on jeans every time we go out.

Olin- We wouldn’t be let into most clubs in Denmark wearing shorts—they’re always too cold or too inappropriate. It’s quite common to get rejected at the club because of your outfit.

Blicher- But it’s fun because in Denmark, you can go to a nice club in a white tee shirt and pants, if it looks stylish

Bloch-Sørensen- If it’s fashionable, you can get away with it. It doesn’t necessarily have to be expensive, as long as it looks good.